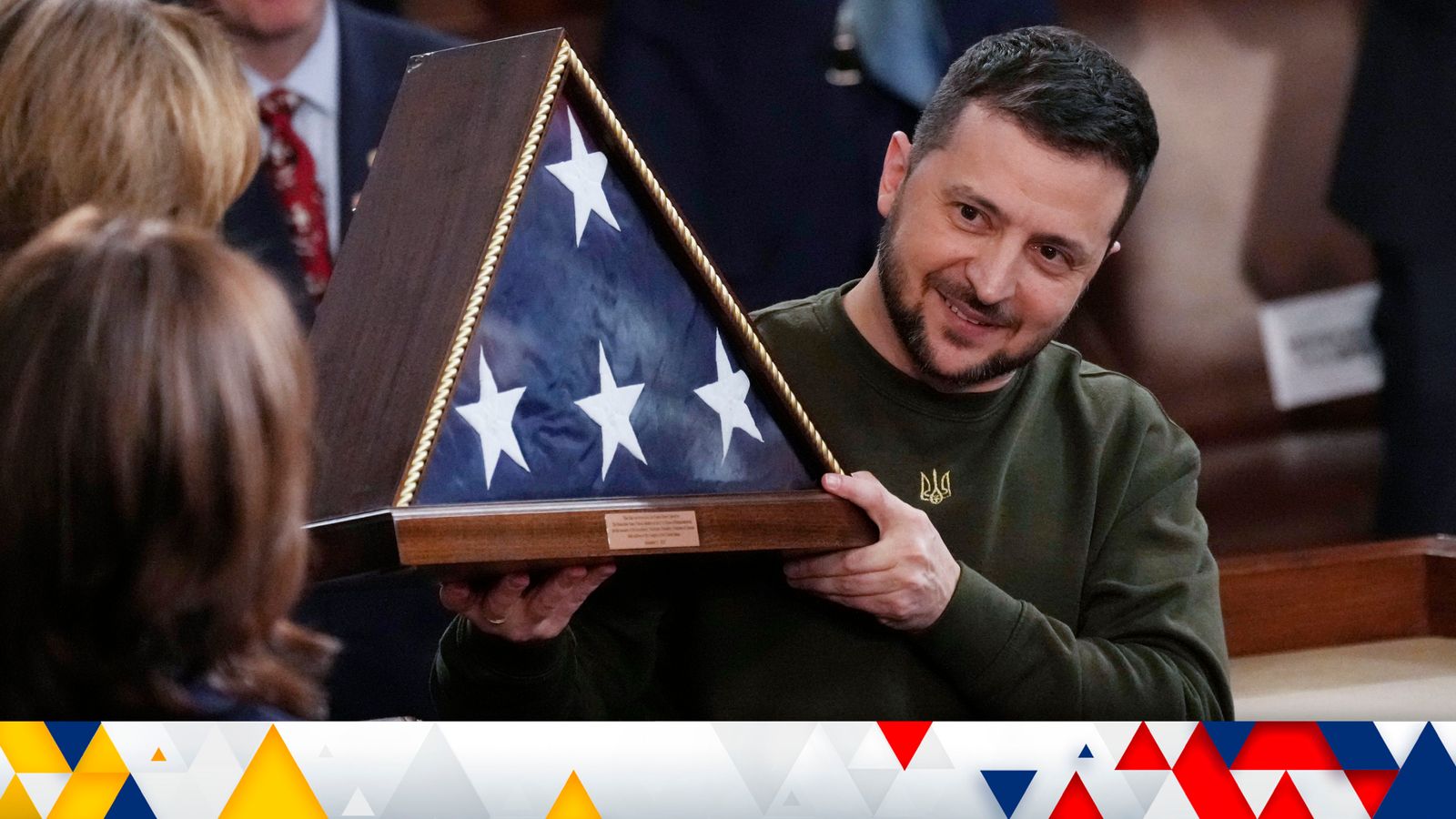 Ukraine is “alive and kicking” and “will never surrender,” President Volodymyr Zelenskyy has said in a speech to the US Congress.

Mr Zelenskyy was greeted with a lengthy standing ovation as he entered the chamber to deliver what he billed as his “speech to Americans”.

“Against all doom and gloom scenarios, Ukraine did not fall. Ukraine is alive and kicking,” he said.

“We defeated Russia in the battle for the minds of the world.”

He pledged there would be “no compromises” in trying to bring an end to the war and vowed that Ukraine “will never surrender”.

He said the conflict showed how democracy worldwide was being tested and its outcome would shape the world for generations.

He then presented the US Congress with a flag given to him by the defenders of the frontline city of Bakhmut, which he visited on Tuesday.

House of Representatives Speaker Nancy Pelosi gifted Mr Zelenskyy a folded and framed American flag that had flown over the Capitol earlier in the day.

Earlier, President Joe Biden said the US will continue to back Ukraine in its fight against Russia for “as long as it takes”.

Outlining further military support in a news conference at the White House, and stood at a podium next to Ukraine’s president Volodymyr Zelenskyy, he paid tribute to Ukrainians’ “steel backbone, love of country and unbreakable determination to choose their own path”. 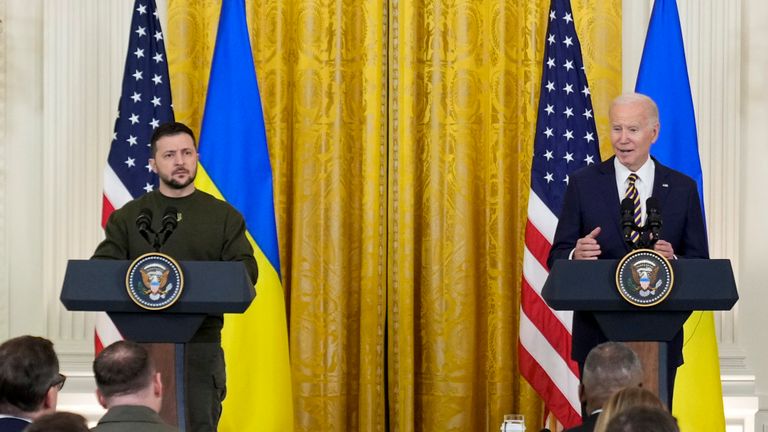 And he said: “American people are prepared to have us stand up to bullies, stand up for freedom. That’s who we are.”

Mr Biden said that Ukraine has “defied Russia’s expectations at every turn” and he went on: “The American people are with you every step of the way and we will stay with you… for as long as it takes.”

“Together we will keep the flame of liberty burning bright,” he added.

Mr Zelenskyy thanked the US and the American people for their support, in particular the Patriot surface-to-air missile defence system, saying that “every dollar of this investment for the US is going to be strengthening global security”.

“This is the only way that we can deprive the terrorist state of its main instrument of terror – the possibility to hit our cities, our energy,” Mr Zelenskyy said. Zelenskyy and Biden laugh together

The US president and Secretary of State Antony Blinken had earlier said the United States would provide $1.85bn in additional military assistance for Ukraine, which includes a transfer of the Patriot system.

The Ukrainian president said during the conference that his country’s defence capabilities will be strengthened in the coming months but would not give further details, and he said Russia needs to be held accountable for its actions.

Mr Zelenskyy, on his first known trip outside his country since Russia invaded in February, was asked by a reporter what was his message to the American people. He replied: “My message: I wish you peace.

“To be together with us, because we really fight for our common victory against this tyranny… and we will win. And I really want to win together. Not want, sorry… I’m sure.”

Mr Zelenskyy also said the war would end once Ukraine’s sovereignty, freedom and territorial integrity were restored, as well as the “payback for all the damages inflicted by Russian aggression”.

Earlier, during a fireside welcome in the White House, Mr Zelenskyy gave Mr Biden a medal that had originally been awarded to a Ukrainian military captain for bravery. The captain said he wanted the US president to get it for his support of Ukraine.

Shortly after arriving in the US, Mr Zelenskyy posted on his Telegram account about his determination to win the war with Russia, writing: “Next year, we must return the Ukrainian flag and freedom to our entire land, to all our people.”

The United States has so far sent around $50bn (£41bn) in assistance to the Kyiv government as it defends itself against an invasion by Russia that began 10 months ago.

Former UK ambassador to Ukraine Leigh Turner told Sky News Mr Zelenskyy’s primary goal is to combat fatigue from supporting countries for what could be a “long and grinding war”.

“Ten months later winter is drawing on, there are a lot of other crises… and even some US lawmakers mostly from the Republican Party have been voting against providing more aid to Ukraine.”

President Biden said he was “not at all worried” about holding together an international coalition supporting Ukraine and said he had never seen the NATO alliance or the European Union more united.

“I see no sign of there being any change. We all know what’s at stake here,” he said.