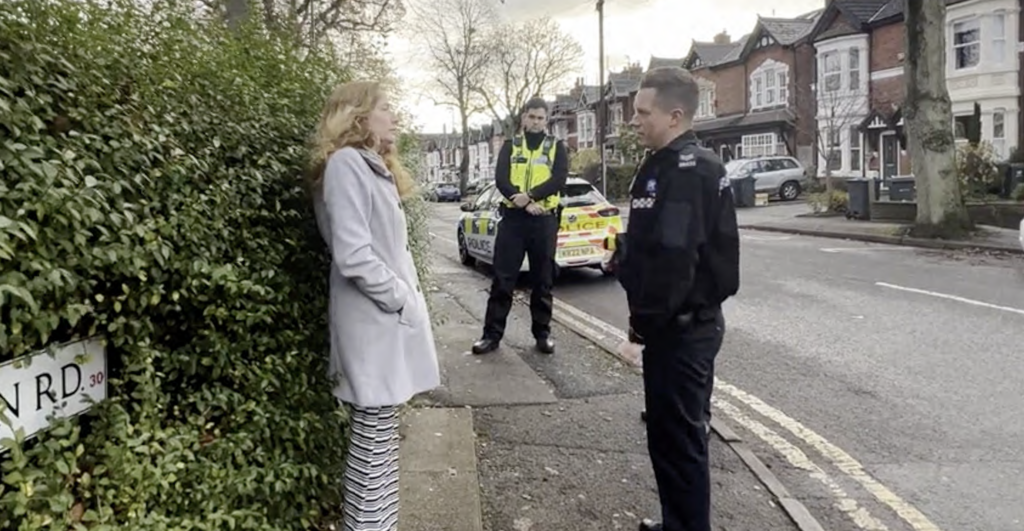 Authorities have arrested a pro-life woman for silently praying outside an abortion clinic in the United Kingdom.

News of Isabel Vaughan Spruce’s arrest comes amid anxieties over the Justice Department’s crackdown on pro-life activists in the United States, such as Mark Houck, a pro-life father arrested for allegedly pushing an abortion clinic volunteer who was reportedly bothering his son as they prayed outside an abortion clinic.

The woman stands silently praying as the police approach her and ask what she is doing, after which she tells them that she “might” be praying in her head.

“Are you praying?” He asks her.

“I might be praying in my head,” she responds.

The police then search her, arrest her, take her to a police station where they interrogate her, and charge her with breaking the PSPO by silently praying.

“No citizen should be criminalised for legitimate, peaceful activity, even prayer. Isabel’s case demonstrates just how far the state can go if we do not vigilantly guard fundamental rights and freedoms,” Scottish communications officer for ADF UK Lois McLatchie said in a statement.

“Politicians in Westminster and Holyrood should take note as they consider rolling out this censorial measure nationwide – if we truly value civil liberties and fundamental rights it should unfathomable for the law to permit a repeat of Isabel’s experience, let alone endorsed by our elected representatives and rolled out nationally.”

Jeremiah Igunnubole, Legal Counsel for ADF UK, emphasized that the Police and Criminal Evidence Act of 1984 “permits a constable to search an arrested person ‘for anything he might use to assist him to escape lawful custody’ or ‘which might be evidence relating to an offence.’”

But such searches must be “reasonably required,” he noted.

“We can safely conclude that our fundamental rights and freedoms are in jeopardy if a search of hair is considered ‘reasonably required’ for a suspected crime of praying, even silent prayer,” Igunnubole added. “As the Public Order Bill goes through Parliament, it’s crucial that Isabel’s experience is kept firmly in the mind of MPs. No one should be criminalised for the peaceful, harmless practice of their faith, let alone thoughts.”

In the United States, the DOJ’s Civil Rights Division has charged almost 30 pro-life individuals with FACE Act violations this year.

The Justice Department has been using the FACE Act to target pro-life activists as a response to the overturn of Roe v. Wade, Associate Attorney General Vanita Gupta said earlier this month.

The associate attorney general described the overturn of Roe v. Wade as a “devastating blow to women throughout the country” that took away “the constitutional right to abortion” and increased “the urgency” of the DOJ’s work—including the “enforcement of the FACE Act, to ensure continued lawful access to reproductive services.”

At least 98 Catholic churches and 77 pregnancy resource centers and other pro-life organizations have been attacked since May, but the DOJ has apparently not charged a single person in connection with these attacks. The DOJ has not responded to The Daily Signal’s requests for comment on this point.

Pregnancy resource centers are typically run by pro-life women who seek to offer expectant mothers alternatives to abortion. Such centers provide diapers, baby clothes, and resources for both mothers and fathers, empowering them to care for their child, overcome addictions, build community, and find jobs.

The Fringe with Megan Fox, Episode 118: Tech Neck. We All Have It. Now What?
Yes, Ilhan Omar Had to Be Punished — and Democrats Know This
‘Spy balloon’ spotted over Latin America is for ‘civilian usage’, China says
‘I Love Drag’: CNN’s Griffin Defends Parents Taking Kids to Drag Shows
What The Media Won’t Tell You: The Squad, Race And Anti-Semitism