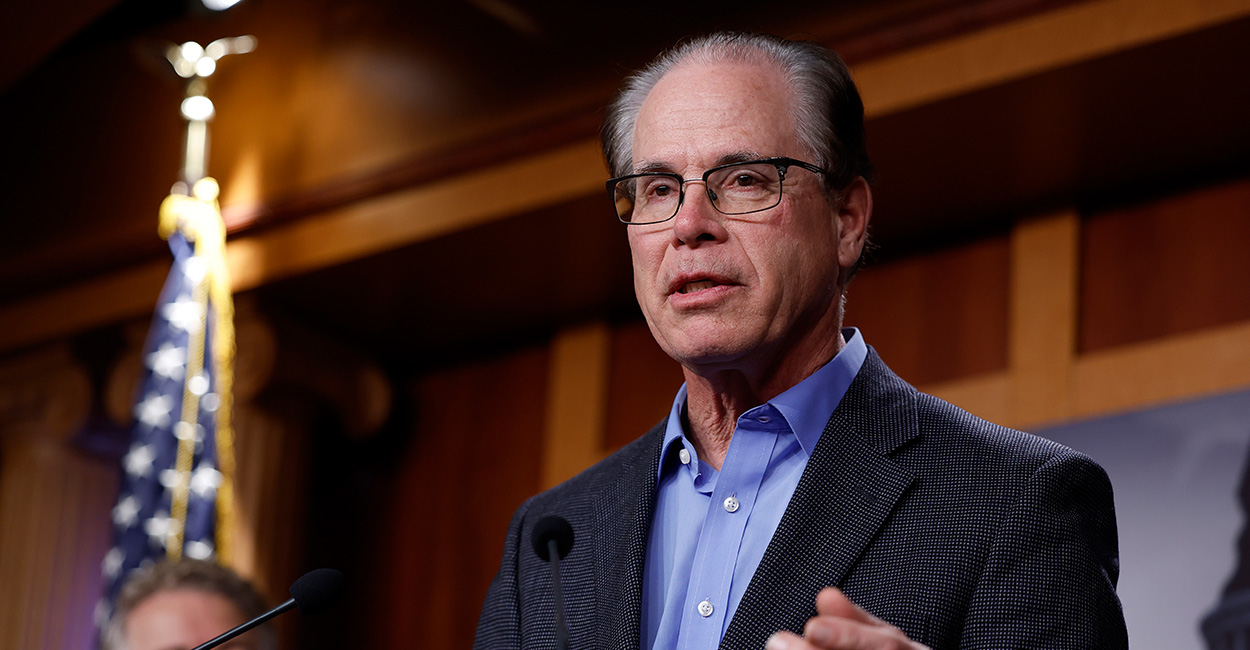 Conservative lawmakers are continuing to rally against Democrat-led efforts to pass funding for the government for the fiscal year that began Oct. 1.

The omnibus spending package text was released in the in the early hours of Tuesday morning and is 4,155 pages long.

“It’s loaded up with earmarks again so it’s the classic worst case of how you’d run any organization,” Braun told The Daily Signal in a phone interview Tuesday, noting that the appropriations bills should have been finished by Sept. 30, the end of the fiscal year.

The Indiana senator, who sits on the Senate Committee on Appropriations, added:

I’m an appropriator, and I can’t think of one conversation that we’ve had jointly among appropriators about what this end product was going to be. So, it’s done basically with leadership and the two lead appropriators, that’d be [Sen. Richard] Shelby and [Sen. Patrick] Leahy, and I think it’s done so purposely so that it’s not a participatory approach.

“Nearly three months since the end of the fiscal year and Democrats – with full control of the House, Senate, and the White House – have failed to do the bare minimum of funding government. Now, with less than a week until Christmas, Washington Democrats have unveiled a massive $1.82 trillion bill that increases base discretionary spending by 9%, on top of the 7% increase they rammed through last year,” said Rep. Jason Smith, the ranking member of the House Budget Committee, in a statement emailed to The Daily Signal.

“The American people voted for a House Republican majority that would stop the reckless spending and put guardrails in place to get our fiscal house back in order,” said the Missouri Republican, adding that “House Republicans will not co-sign a massive, last-minute bloated spending bill Democrats are trying to ram through on their way out of the majority.”

The Senate and the House advanced a “stopgap funding bill” last week that continues to fund existing programs and gives Congress until Friday at midnight to finalize a spending bill. The measure passed 71-19 in the Senate; it passed 224-201 in the House.

Braun, along with Republican Sens. Rick Scott of Florida, Rand Paul of Kentucky, Mike Lee of Utah, and Ron Johnson of Wisconsin, held a press conference on Tuesday afternoon.

“I brought with me the omni[bus spending bill]—4,155 pages. When was it produced? In the dead of the night. One-thirty in the morning when it was released. Now, people argue that it’s conservatives’ fault. You don’t have the Christmas spirit. Somehow you’re holding up government. Well, whose job is it to produce this?” Paul asked during the press conference.

Well, the real question is this: what is more dangerous? What is more dangerous to the country? $1.1 trillion in new debt. Or as Republican leadership likes to say, ‘oh, but it’s a win, it’s a big win. We’re getting $45 billion for the military.’ So which is more important? Which threatens the country more? Are we at risk for being invaded by a foreign power if we don’t put $45 billion into the military? Or are we more at risk by adding to a $31 trillion debt?

Paul continued, “I think the greatest risk to our national security is our debt. The process stinks.”

Johnson discussed an amendment he plans to ask for and held a pile of papers that he said were all the earmarks included in the omnibus spending bill.

“The amendment that I’ll be asking for, and that Sen. [Chuck] Schumer agreed to last week, would be to eliminate all the earmarks. And I’ve got my own prop here,” Johnson said. “This is the language on earmarks only. There are – let me get the exact numbers – $9.8 billion worth of earmarks. Thousands of individual projects here – both Democrat and Republican.”

It’s interesting to note on the Republican side. We actually have a conference resolution that we don’t support earmarks. Well, we’re supporting over $4 billion worth. Democrats are getting $5.4 billion worth of earmarks.

Lee discussed the length of the omnibus bill and compared it to reading the Bible, noting that it was “4,155 pages long.”

But you’d have to read, to get through the same amount of text, you’d had to read the Bible three and a half times during that same period and be able to comprehend it. And unlike the Bible, this stuff can’t be really read on its face and understood. It takes cross-referencing to understand all of that.

Scott talked about his experience in the Senate in recent years and the near record-inflation in the U.S.

“Why is something going to change? The Democrats have been able to do this in the past. They’re going to do it next year” Scott said. “We’ll be in the exact same position next year because we have allowed them to get away with it.”

“This has got to stop. We’ve got to say, ‘we came up here to be fiscally responsible and watch your money.’ If you look at the inflation that’s happening right now, inflation is caused by one thing: reckless government spending,” Scott added.

If you look at the inflation, which has been about 14% since [President Joe] Biden got elected, it’s because we haven’t lived within our means.

A group of House conservatives promised to oppose and stymie the legislative priorities of any Republican senator who votes in favor of the $1.85 trillion omnibus spending bill this week, The Daily Signal previously reported.

The warning shot, delivered via a letter from 13 conservatives Monday night, comes amid rising tensions between Republicans in the House and Senate. In just two weeks, Republicans will control the U.S. House of Representatives, yet passage of the spending bill would severely curtail their efforts to conduct meaningful oversight and hold the Biden administration accountable.

“Senate Republicans have the 41 votes necessary to stop this and should do so now and show the Americans who elected you that they weren’t wrong in doing so,” the lawmakers wrote. “The American people did not elect us—any of us—to continue the status quo in Washington, as this bill will undoubtably do.”

The letter cites several policy areas where House Republicans want to use the “power of the purse” as leverage with the Biden administration. But if at least 10 Republican senators join with Democrats to approve the omnibus spending bill, that leverage evaporates.

Matthew Dickerson, the director of the Grover M. Hermann Center for the Federal Budget at The Heritage Foundation, labeled the omnibus package a “behemoth spending bill.” (The Daily Signal is Heritage’s news outlet.)

“This $1.85 trillion behemoth spending bill is reckless and will only add to inflationary pressures while American families are suffering from the consequences of Congress’s excessive spending,” Dickerson told The Daily Signal in an emailed statement.

“The bill is loaded with woke spending priorities that advance the left’s extreme agenda, even after the American people voted for a divided government. Congress should respect the will of the voters and let the next Congress write reasonable appropriations bills in January that cut out wasteful spending while funding important priorities like securing our borders,” Dickerson said.

In the same vein, Richard Stern, a senior policy analyst of budget policy in the Grover M. Hermann Center for the Federal Budget at The Heritage Foundation, highlighted the impact of the spending bill on inflation.

“It’ll add $2.65 trillion to the national credit card – $20,000 per household, driving up inflation,” Stern told The Daily Signal in an emailed statement. “All 6,825 pages of bill text and related material are about twice the length of the Bible – with less than three and a half days to read it.”

Shelby and Leahy did not immediately respond to The Daily Signal’s request for comment.

Rob Bluey contributed to this report.

NewsBusters Podcast: Kevin McCarthy and Jim Jordan School Sunday Hosts
White Privilege Virtue-Signaling Scarborough: I Wouldn’t Have Been Beaten Like Tyre
Number of officers shot in line of duty up 113% since 2020
Senators push for airline passenger protections after holiday travel meltdown
Zero protesters show up at Jordan Peterson event that activists warned was ‘racist’ and ‘homophobic,’ demanding its cancellation