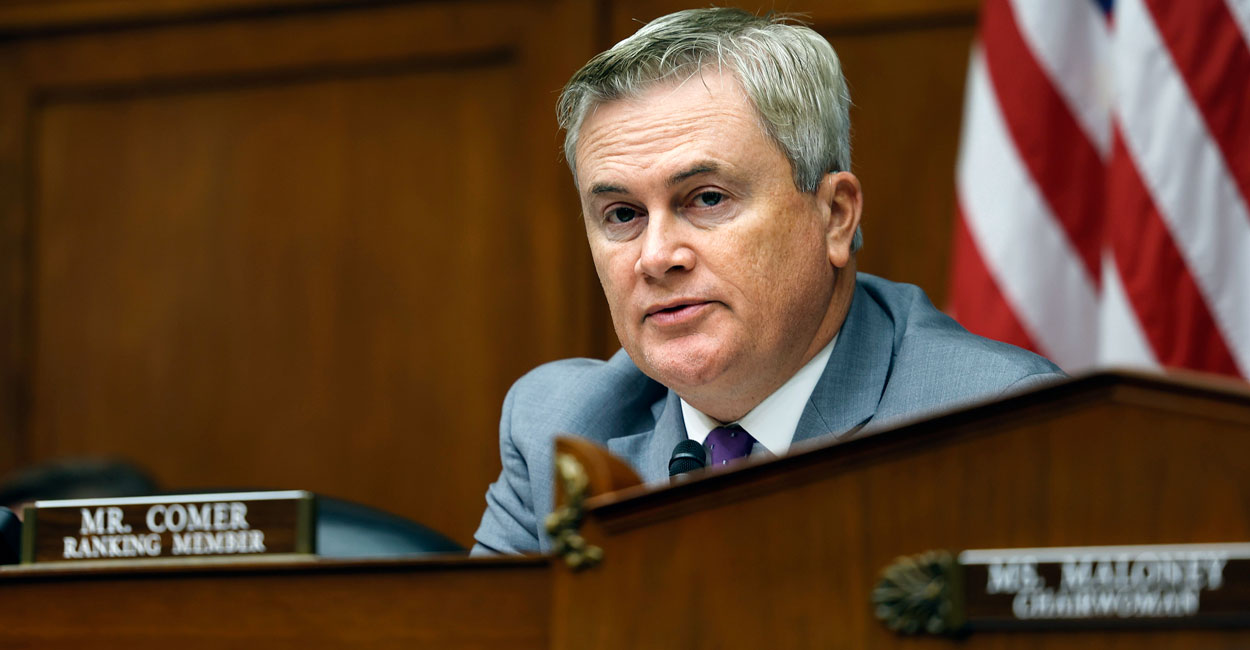 Rep. James Comer, R-Ky., the incoming chairman of the House Oversight and Reform Committee, is urging his Senate counterparts to reject the $1.85 trillion omnibus spending bill in order to strengthen GOP’s oversight authority for the next Congress.

Comer will ascend to chairman of the powerful House committee Jan. 3 with a range of investigations planned. Before he’s even able to get started, however, Senate Republicans who support the omnibus spending bill could strip Comer of important leverage—the power of the purse.

With 20 Republican senators already voting Tuesday on a procedural motion to advance the bill, Senate Majority Leader Chuck Schumer, D-N.Y., appears to have enough GOP support to get the bill done this week.

That hasn’t stopped Comer and other House Republicans from warning about the consequences.

“It’s imperative that we stop the massive omnibus so that Republicans can use our majority power next Congress to conduct oversight of the federal government, hold the Biden Administration accountable, and enact good government reforms,” Comer told The Daily Signal in a statement.

Withholding money from the Biden administration is one tool House Republicans can use to exercise effective oversight—particularly if federal agencies and government officials are uncooperative or not forthcoming with information in the new year.

“The primary method that Congress can use to hold federal agencies accountable is via appropriations,” said Paul Winfree, former budget policy director for President Donald Trump and a distinguished fellow at The Heritage Foundation. “They should not be appropriating until they’ve figured out just how to use their oversight powers.” (The Daily Signal is the multimedia news organization of The Heritage Foundation.)

Passage of the omnibus spending bill would insulate the Biden administration from a spending fight for the next year. The bill making its way through the Senate funds the president’s agenda from through Sept. 30, 2023.

Comer was first elected to Congress in 2016 and served as ranking member on the House Oversight and Reform Committee while Democrats had the majority. He’ll ascend to the top spot once the 118th Congress starts in less than two weeks.

He’s among a vocal group of House Republicans who are warning about implications of passing the massive spending bill during the current lame-duck Congress rather than waiting until next year when Republicans have control of the House.

“It’s no surprise that Democrats are racing to use their waning days of power to force through trillions of dollars in new spending and a host of bad policies that will weaken our country,” Comer told The Daily Signal. “Democrats’ unhinged, inflation-inducing spending binge over the last two years caused 40-year high inflation that’s harming the pocketbooks of Americans and has allowed rampant government waste.”

In addition to Comer, 13 House Republicans are promising to oppose and stymie the legislative priorities of any Republican senator who votes in favor of the omnibus spending bill this week. They have the support of likely incoming House Speaker Kevin McCarthy, R-Calif., as well.

Schumer already has the support of Senate Minority Leader Mitch McConnell, R-Ky., and Sens. Richard Shelby, R-Ala., vice chairman of the Senate Appropriations Committee. They were among the 20 Senate Republicans who voted to move forward on the bill Tuesday.

Earlier this year, House Republicans outlined an ambitious oversight agenda. It includes an investigation of Homeland Security Alejandro Mayorkas’ failures leading to the border crisis, the government’s collusion with Big Tech to censor speech, the origins of COVID-19, Hunter Biden’s corrupt business dealings, the disastrous withdrawal from Afghanistan, politicization of the FBI, the administration’s promotion of critical race theory, and many other topics.

By voting for the $1.7 trillion spending bill, Senate Republicans would strip their House counterparts of the leverage they need on all those investigations and more by giving Biden and Democrats exactly what they want—money to continue on, unaffected, for another year.

NYT, DHS Celebrate Deceptive ‘Decline’ in Illegal Aliens as Biden Admin Legitimizes Border Crossers
Tom Brady Retires From Football “For Good” This Time (VIDEO)
Air Force General Predicts U.S. Will Be At War With China In 2025: ‘I Hope I Am Wrong’
Why is Rick Astley suing rapper Yung Gravy?
An Arm and an Egg