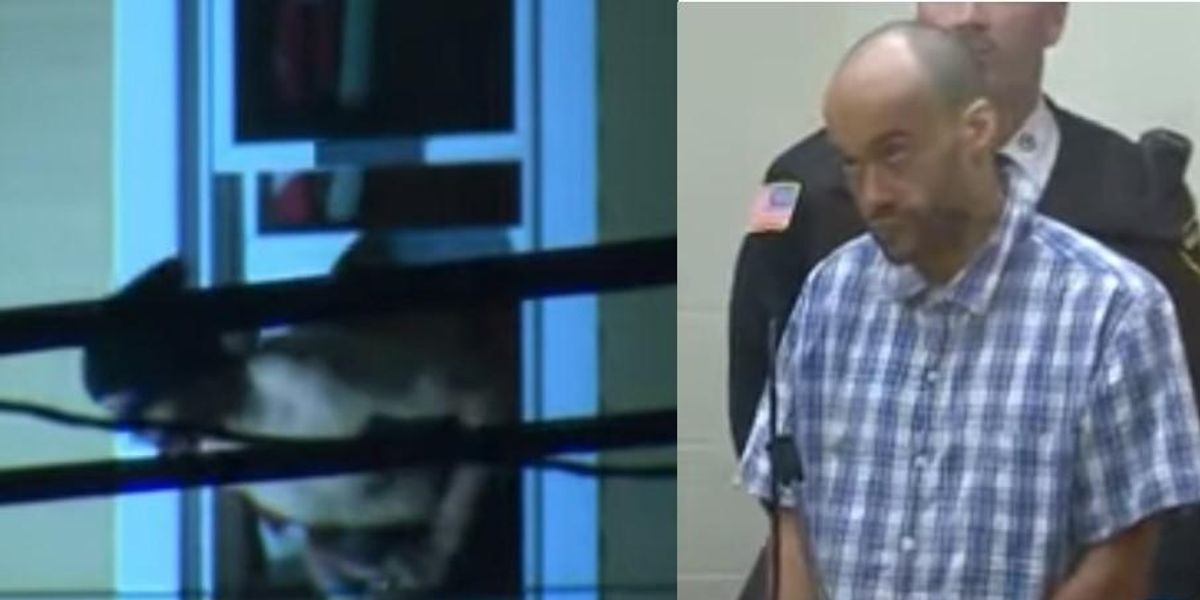 A Massachusetts man familiar to local law enforcement is in custody once again after he reportedly attacked a police station with a chainsaw, then engaged in a lengthy standoff with police, during which time he endangered his two young children.

Last Sunday was reportedly a long day for Brien Buckley, 35, of Cohasset, Massachusetts, along the state’s eastern coast about 25 miles southeast of Boston. At about 2:30 p.m. that afternoon, Buckley drove his red dump truck to the Cohasset Police Department, where he struck a tree on public property, then exited his vehicle, grabbed a gas-powered chainsaw, revved it several times, then allegedly used it to inflict serious property damage. Police claim that Buckley used the chainsaw to damage a package left outside the station and to carve the words “good luck” into the front door.

A civilian employee working behind the front desk of the lobby managed to lock herself into a nearby office and press the panic button to alert officers to the incident. “The chain was running. He attempted to cut through the security door in the lobby. The desk attendant was there, and she fled for her own safety,” said William Quigley, the Cohasset chief of police.

At that point, the suspect left police premises and returned to his residence, where his two young children were located. He then supposedly barricaded himself inside the residence and engaged law enforcement in a standoff that lasted for hours.

During the standoff, Buckley hurled various projectiles — including toys, blood-soaked toilet paper, and a knife — at police while he continued to brandish the chainsaw and yell incoherently, reports indicated. By that point, officers from several law enforcement agencies had gathered at Buckley’s residence, and all had become increasingly concerned for the safety of the two young children, both under age 5, held captive inside.

At one point, Buckley allegedly dangled both of the children near or perhaps even outside the second-story window of his residence. Though police say they were attempting to resolve the situation “peacefully,” they determined that they could no longer risk the children’s safety.

“After hours-long negotiations, the male became more erratic to the point where SWAT supervisors sought permission to enter the home due to the increasingly clear and present danger to the children,” police said.

Buckley allegedly resisted arrest, so police used a taser to subdue him. They brought him into custody and charged him with assault by means of a dangerous weapon, three counts of damage to property, two counts of child endangerment, resisting arrest, driving to endanger, unlicensed operation of a motor vehicle, disorderly conduct, disturbing the peace, and wanton destruction of a tree.

On Monday, he appeared in Quincy District Court, where he continued to mutter to himself throughout the proceedings. The judge then ordered that Buckley be given an extensive mental health evaluation at Bridgewater Hospital. Buckley is tentatively scheduled to appear in court again on January 6.

After police arrested Buckley, his two children were immediately placed into the care of their mother and grandfather, who were on the scene. Neither child was physically hurt in the incident. The mother had contacted police back in August to report that Buckley had supposedly attempted to choke her during an argument. Buckley had been arrested and charged with domestic assault and battery and domestic assault and battery with strangulation for that alleged incident. The status of that case remains unknown.