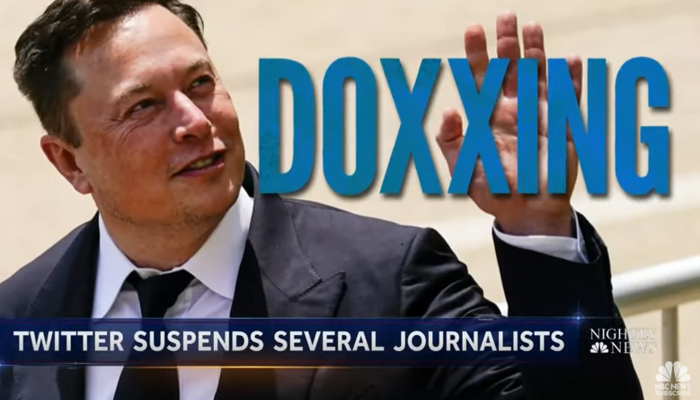 Elon Musk’s decision to abruptly suspend several journalists from Twitter sparked an outcry on Friday from First Amendment advocates, threats of sanctions from European regulators, and questions about the social media platform’s future as a gathering place for news and ideas.

Yes, after years of bans on conservative accounts and deletion of conservative content by social media behemoths Facebook, YouTube, and Twitter, suddenly it’s a “free speech and online censorship” problem when it happens to left-wing journalists:

But as people debated complex, novel issues of free speech and online censorship, the move also underscored the role of a simpler, more enduring element of American life: the press baron.

Grynbaum was at least consistent, admitting “[j]ornalists’ participation on Twitter, a privately controlled company, is not tantamount to free speech; reporters are free to publish their work on their own companies’ platforms and through other social media outlets.”

He continued, going back to chest puffing:

For more than a decade, however, Twitter has occupied a unique role in the news and information ecosystem, where journalists flock to share their reporting, develop relationships with sources, and debate issues of the day. It has also allowed writers outside of established organizations to break into the political and cultural conversations.

Grynbaum also pointed out that Musk brought up “censorship of conservative viewpoints” regarding the Hunter Biden laptop and quoted his jab at the press:

“So inspiring to see the newfound love of freedom of speech by the press,” Mr. Musk wrote in a Twitter post, implying that the reporters upset about the suspensions did not speak out when Twitter restricted certain posts about Covid and presidential politics that the platform had deemed misinformation.

Meanwhile, tech reporter Kevin Roose mocked Musk’s “bizarre” Twitter files expose, which the paper has almost wholly ignored, while taking the angle that Musk is admired among some Silicon Valley bosses for his management style since taking over Twitter via a phony homophobia complaint.

(Incidentally, Roose was delighted in 2020 when a gay Marxist from a billionaire family was able to censor the YouTube channel of Stephen Crowder.)

Johannes Bahrke, a spokesman for the European Commission, said on Saturday that although the reinstatement of the journalists was “encouraging,” the commission was concerned about the arbitrary nature of Mr. Musk’s decisions.

For some reason, the United Nations High Commissioner for Human Rights also weighed in: “The suspensions had alarmed free speech advocates.”

It’s about time they were alarmed.

The reporters finally addressed the obvious rejoinder noting Musk’s criticism of “actions taken by Twitter’s previous owners to restrict certain posts about Covid and presidential politics that the platform had deemed misinformation.”

The difference being that The Times went along with Twitter’s previous interventions to limit conservative expression (i.e. “misinformation) — from locking down news about Hunter Biden’s laptop, to suspending accounts for doubting COVID lockdowns or vaccines or masking, to “misgendering” government officials.

It’s frightening how dearly Times reporters long to play hall monitor, lamenting that they can’t listen in on private conversations taking place within online apps like Clubhouse, Signal, and Telegram. And the Times has very little room to criticize supposed “misinformation” on podcasts, given its own history of podcast falsehoods.