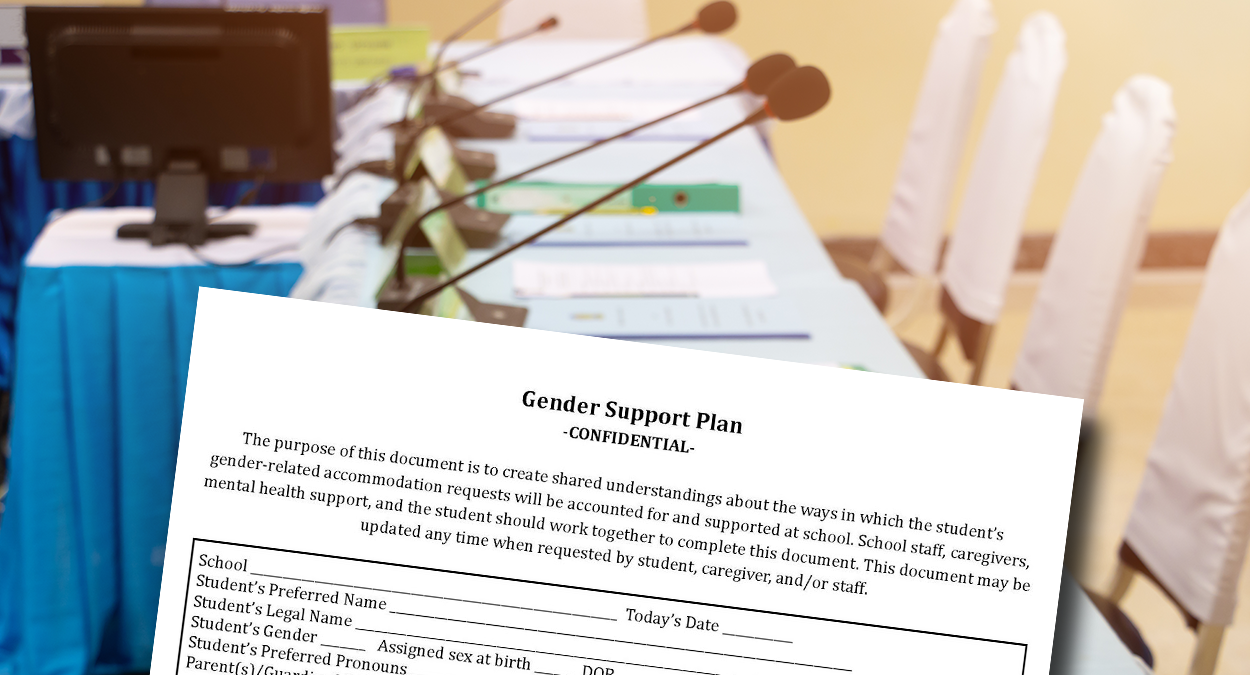 The school board and superintendent of an Indiana school district refused to comment Monday on a recently uncovered transgender policy for students that keeps parents in the dark, nearly two weeks after a public meeting at which parents demanded that officials explain why they’re hiding information.

Concerned parents in Pendleton, Indiana, flocked to the Dec. 8 school board meeting two days after The Daily Signal exposed the school district’s secret policy and a so-called Gender Support Plan for transitioning students.

School board President Joel Sandefur, other school board members, Schools Superintendent Mark Hall, and one of his assistants all refused to respond to The Daily Signal’s latest request for answers to five key questions about the secret policy before Monday’s publication deadline. Those questions are specified below.

“You should be ashamed,” one mother told Hall and the school board at the Dec. 8 meeting. “I trusted you with my children and you lied to me—to us.”

Dozens of parents and other area residents packed the meeting room to obtain information directly from the elected board and Hall, the appointed superintendent of the Pendleton-based school district, known as the South Madison Community School Corporation.

They soon were disappointed, as Sandefur and Hall evaded questions and blamed the district’s secret transgender policy on unrelated federal law and regulations.

Because of illness, this columnist was unable to follow up my Dec. 5 expose in The Daily Signal by attending and reporting immediately on what happened three days later at the school board meeting. Now I am.

Then, after a short break, Hall read a prepared statement. In it, the superintendent claimed that because the South Madison school district accepts federal funding, the district is required to follow a non-dicrimination policy, which appears as a “Non-Discrimination Statement” on its website. That statement refers to federal non-discrimination law as well as, inconguously,  Department of Agriculture regulations.

South Madison, the superintendent of schools intoned, would not discriminate based on sex, color, age, national origin, gender identity, etc.

To comply with that law and those rules, Hall said, the school system must treat all students equally with regard to “preferred names,” equating a student’s asking to be called by a shortened name or nickname to a student’s changing names and personal pronouns as a result of a gender transition.

The superintendent didn’t connect this explanation to parents’ deep concern about the school district’s withholding information from parents in any way. Hall also offered no explanation as to why a blank form used by the district for transitioning students, called the Gender Support Plan, isn’t accessible online.

Before I go into more detail, some background:

Under the policy, the superintendent’s office orders counselors and teachers to refrain from mentioning a “transitioning” student’s new personal pronouns or name to his parents—much less check that parents are even aware that their child believes he or she is transgender.

School counselor Kathy McCord went on the record with The Daily Signal to outline the shady methods the school district employed to keep the so-called Gender Support Plan away from teachers and parents. McCord also described how she was ordered to compel speech from teachers by requiring them to use one set of names and pronouns with students and another with parents.

The Daily Signal reported that McCord and another counselor, who chose to remain anonymous, expressed distress at the district policy. They said that they became school counselors to work with students and parents, not to come between them.

McCord told The Daily Signal that Assistant Superintendent Andrew Kruer, Hall’s subordinate, had informed all counselors that this procedure of keeping information from parents was a school board-approved policy. Kruer also told counselors that the district’s legal counsel, LGBTQ+ advocate Jessica Heiser, had informed the counseling staff it was federal law.

Amanda Keegan, a geography and psychology teacher at the district’s Pendleton Heights High School, told The Daily Signal that the secret transgender policy was one reason she resigned. Keegan said it made her physically ill to lie to parents’ faces about their children.

“When I had to look at that parent, and feel like I was lying to that parent … I was sick to my stomach,” she said. “I can’t lie to parents. I can’t do that again.”

Before publishing its initial report, The Daily Signal sought comment from Hall, Kruer, and Sandefur, the school board president. All three flatly refused to provide comments or explanations about South Madison’s student gender policies.

One school board member, Kaye Wolverton, said that she was unaware of any Gender Support Plan or policy to keep information from parents—but that she never would have approved either.

At one point during his prepared statement to parents, Hall, appointed by the board in 2020, said the district didn’t ask or allow counselors or teachers to diagnose or treat gender dysphoria, which conflicts with expectations set forth for counseling staff in the district’s Gender Support Plan as well as the information provided by McCord.

Here is a copy of a blank Gender Support Plan used by the South Madison district:

Hall explicitly stated that the South Madison district would discuss anything with a parent at any time the parent called the school. He claimed the district has no policy or directive to tell staff to lie to parents.

The emails, staff testimonies, and other evidence collected by The Daily Signal disprove that statement, however.

Also, two students and one advocate thanked the school district during time set aside for public comment for its gender support policy—contradicting Hall and Sandefur’s claims that no such policy exists.

Many parents weren’t impressed with Hall’s statement, however.

Several at the meeting cited an internal email published Dec. 5 by The Daily Signal, which they said disproved Hall’s claims and rationale:

Referencing the district’s policy allowing a student to use a restroom designated for the opposite sex, one father said, “I draw the line when other people’s feelings start to present a threat to the safety of my children.”

He had moved with his family from Loudoun County, Virginia, to flee that school district’s withholding information about sexual misconduct or assault—only to find South Madison was practicing the same policy.

Statements by McCord, the counselor who talked to The Daily Signal, disprove this assertion, since she said the current procedure of withholding information from parents wasn’t implemented until the fall of 2021.

Sandefur admitted late in the meeting that the school board had not approved the Gender Support Plan as written nor its use, nor had the board approved updates to the Non-Discrimination Statement, as he had claimed earlier.

The school board president accused parents who are concerned about the district’s Gender Support Plan of “not caring about the civil rights of the students.”

At one point, Sandefur became so upset with one parent that he ordered an on-site police officer to throw out the father, Brandon Godbey, who had responded by saying “… because you lied to us” to one of his comments.

The police officer escorted Godbey out of the building with no further fanfare. Sandefur told the crowd: “I took no pleasure in doing that.”

Another father asked the school board what would happen in the case of a student suicide in which the school was aware that the student was struggling with gender dysphoria but the student’s parents weren’t.

“Because of your perception about the mom and dad,” he said, “ … you could have a child who needs the help [of his parents] not get the help he needs, and that child ends up committing suicide. That is on you all.”

“And when they find out that children were asking for assistance, and you didn’t let the parents know—then what are you going to do?” the father asked.

Neither the board nor the superintendent answered his question.

Several times during the board meeting, Sandefur assured the crowd that there was a very simple explanation—the South Madison district was following its Non-Discrimination Statement.

But if it were such a simple explanation, why did the school board president refuse to comment at The Daily Signal’s request before it published the initial report on South Madison’s secret transgender policy?

And why did Hall and his assistant superintendent, Kruer, refuse to answer any questions, if it all was so cut and dried?

Before publishing this report, The Daily Signal again sought comment Monday morning from the South Madison district by emailing Sandefur and the rest of the school board, plus Hall and Kruer. The questions asked:

The Daily Signal received no response before a 3 p.m. deadline.

The reality is that South Madison’s school board and top school district officials have chosen to lamely cite an unrelated non-discrimination policy in defense of a horrible standard of keeping parents in the dark, rather than to respect the rights and homes of Pendleton families.

At no time during the school board meeting—or since—did the district address the internal emails or concerns of parents, but instead accused them of being “uncaring.”

Sandefur and Hall, in particular, ignored evidence of their own dishonesty with parents to mutter the same tired excuses again.

This situation in this Indiana town is another blistering example of why school board elections are so critical.

When a school board refuses to hold staff accountable and cowers behind tepid explanations, parents have a responsibility to vote out those who value comfort over service.