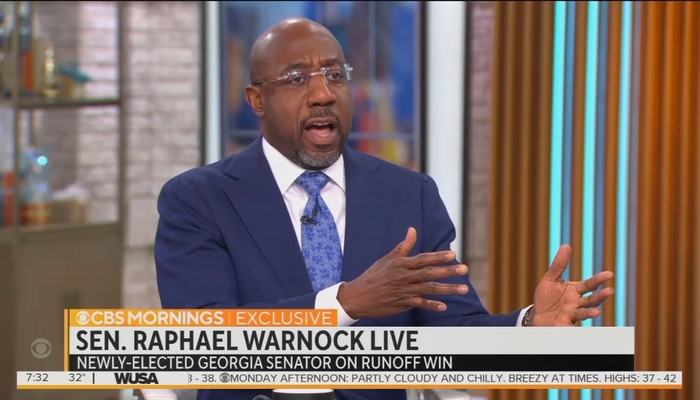 Monday’s CBS Mornings didn’t cover part six of the Twitter Files released on Friday, but they did spend eight minutes and 22 seconds sucking up to Senator Raphael Warnock (D-GA) over his latest election victory, asking him to run for president in 2024, and pushing him from the left on “voter suppression,” prosecuting former President Trump, and the border.

Of course, nothing came up about his alleged violent behavior toward his ex-wife, allegations of missed child support, misconduct at a church camp he had helped oversee, and evictions from apartments owned by the church he pastors (which are in rancorous conditions).

“Coming up, newly reelected Senator Raphael Warnock, the Georgia Democrat, is here to talk about the long — there he is — hello, Senator — to talk about the long campaign to beat Herschel Walker and what’s coming next for him. He’ll share after the break,” boasted co-host, Democratic donor, and Obama family friend Gayle King in a tease.

King returned for the second half-hour by gushing over Warnock’s “victory cement[ing] Democrats’ control of the U.S. Senate” and then gave her congratulations before asking whether he had heard from Republican Herschel Walker.

When Warnock said he hadn’t, King fretted that the races were close as if to suggest Georgians should have elected him in landslides: “We’ll talk about your goals in a second. But the races seemed to be closer than people expected considering your opponent, considering the times. What do you say about that, and Stacey Abrams did not win the gubernatorial seat?”

Since Warnock didn’t take the bait and admitted that they were “hard fought”, King then joined Warnock in going hard to the left in asking him if “voter suppression” is “still an issue, though, in Georgia.”

King barely gave credence to the other side: “Cause some people could say, look, he won that’s no longer an argument.”

Warnock was given room to run, insisting that people “should not assume that because I won that voter suppression is not an issue in Georgia” when the story should be he won in spite of it because Georgia Republicans “shortened the runoff” and tried to take away early voting on the Saturday after Thanksgiving (which our Brad Wilmouth debunked amid cries of racism).

Socialist co-host Tony Dokoupil gently pushed back by wondering “what do you say to” Secretary of State Brad Raffensperger, who called him an election denialist for insisting the vote was suppressed.

Of course, Warnock wiggled out: “[T]he fact that people have had to overcome barriers doesn’t mean those barriers don’t exist. We literally saw college students and seniors in lines that were hours and hours and hours long. Maybe he’s happy with that. I’m not.”

King, Dokoupil, and co-host Nate Burleson then moved onto 2024 with Burleson asking him to run for president (click “expand”):

BURLESON: Speaking of elections, you mentioned during the commercial break there is a fascination with the next election.

BURLESON: Do you believe that President Biden should run for re-election in 2024?

WARNOCK: Oh, I think if he chooses to run, I will support him. But I do think we spend so much time in our country focused on the next selection that we’re not thinking often enough about the next generation.

WARNOCK: It ought to be about the hard-working people of Georgia who are trying to keep the promises that all of us make to our children.

DOKOUPIL: Are you excited?

BURLESON: Are you running for the president of the United States?

WARNOCK: Look, my name’s been on the ballot five times in three years. And so, after that, I’m finally focused on being able to do the work the people of Georgia have elected me to do. In addition to that, I’ve got two children at home.

WARNOCK: I promised them a trip to Disney world.

KING: — well, I think you can deliver on that.

King shifted gears to more liberal framing on January 6 by trying three times to ask him whether Trump should be prosecuted.

Dokoupil only offered mild questioning on the topic: “Do you think [ending Title 42 is] a mistake given the lack of resources on the border, given the crush of people coming, to let it expire? Do you think we need Title 42 to control the border?”

This Monday morning act of nauseating hero worship of a scandal-ridden progressive was made possible thanks to the endorsement of advertisers such as BMW and Dawn. Follow the links to see their contact information at the MRC’s Conservatives Fight Back page.

To see the relevant transcript from December 19, click here.