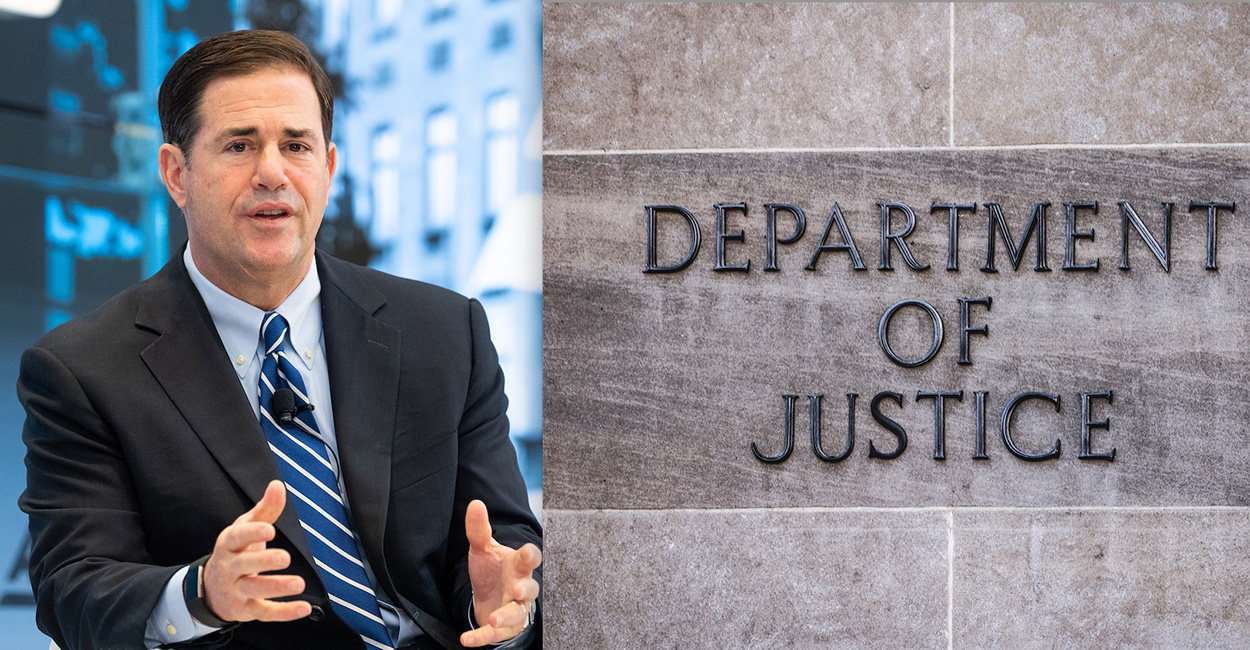 Ducey, a Republican, has built a makeshift border wall with double-stacked shipping containers topped with razor wire along sections of Arizona’s border with Mexico in Yuma and Cochise Counties. The federal government is calling the governor’s actions illegal, saying the shipping containers were placed on federal land without permission.

“Officials from Reclamation and the Forest Service have notified Arizona that it is trespassing on federal lands,” the DOJ states in its lawsuit filed Wednesday with the U.S. District Court for the District of Arizona.

Ducey’s office wrote a letter to the DOJ Tuesday, after learning of the federal government’s intent to take legal action against the state, and said prosecutor’s claims are “unfounded or inaccurate.”

When Biden took office, construction of the border wall stopped and “our forests and public lands in Arizona quickly became strewn with abandoned clothing and property, and an ever-increasing number of migrants who continue to flow into the state,” Ducey’s office told the DOJ in the letter.

“This influx has resulted in fields of agricultural produce being contaminated, hospitals overflowing and U.S. citizens not being able to enjoy their homes or property due to trespassers,” Ducey’s office said. “The number one public safety risk and environmental harm has come from inaction by the federal government to secure our border.”

Ducey’s office also addressed the DOJ’s claim that the border wall hinders the ability of law enforcement to do its job, writing, “local law enforcement professionals have in reality lauded the installation of the temporary barrier.”

“Arizona stands ready to cooperate with the federal government on construction of a border wall and always has been,” the letter states.

Over the summer, Ducey launched the wall-building project in Yuma County in the far western part of the state. Using 130 shipping containers, Ducey filled 3,820 feet of previously open border. The project is reported to have cost about $6 million.

“Five wide open gaps in the border wall near Yuma neighborhoods and businesses are now closed off,” Ducey said in an Aug. 24 statement. “In just 11 days, Arizona did the job the federal government has failed to do—and we showed them just how quickly and efficiently the border can be made more secure—if you want to.”

Work was underway to build a 10-mile wall with double-stacked shipping containers topped with razor wire in Cochise County. The project, expected to cost around $95 million, was brought to a halt this week due to environmental protests.

The DOJ’s lawsuit comes after Ducey filed a lawsuit against the federal government in October, asking the Arizona District Court to determine who has “jurisdiction over land within the State of Arizona,” and to consider the “state’s interests in protecting itself.”

The governor says he was no longer willing to wait for the Biden administration to fill the gaps in the border wall.

“Arizona is going to do the job that Joe Biden refuses to do—secure the border in any way we can,” Ducey said in an Oct. 21 statement announcing the lawsuit against the federal government.

Ducey has made the makeshift southern border wall in Yuma and Cochise Counties one of his final missions before he hands the reins over to Democrat Gov.-elect Katie Hobbs on Jan. 5.

It will likely “cost about $70 million” in “Arizona taxpayer dollars” to remove the shipping containers, according to Ali Bradley, NewsNation’s border correspondent.

“The Biden administration purposefully caused and has maintained the worst border crisis in history,” Mike Howell, director of the Oversight Project at The Heritage Foundation, told The Daily Signal in an email Thursday. “The fact that they are suing anyone who is trying to stop it shows their true colors. They are the best friends the cartels have ever had.” (The Daily Signal is the news outlet of The Heritage Foundation.)

The lawsuit over Ducey’s shipping container border wall comes days before Title 42 is expected to expire. Title 42 is a Trump-era COVID-19 policy that has allowed Border Patrol to quickly expel illegal migrants from America.

California Gov. Gavin Newsom visited the southern border Monday and voiced concerns over the numbers of illegal immigrants his state has received.

“The fact is, what we’ve got right now is not working and is about to break in a post-42 world unless we take some responsibility and ownership,” Newsom told ABC News.

The number of migrants seeking to cross the border illegally is expected to increase when Title 42 expires.