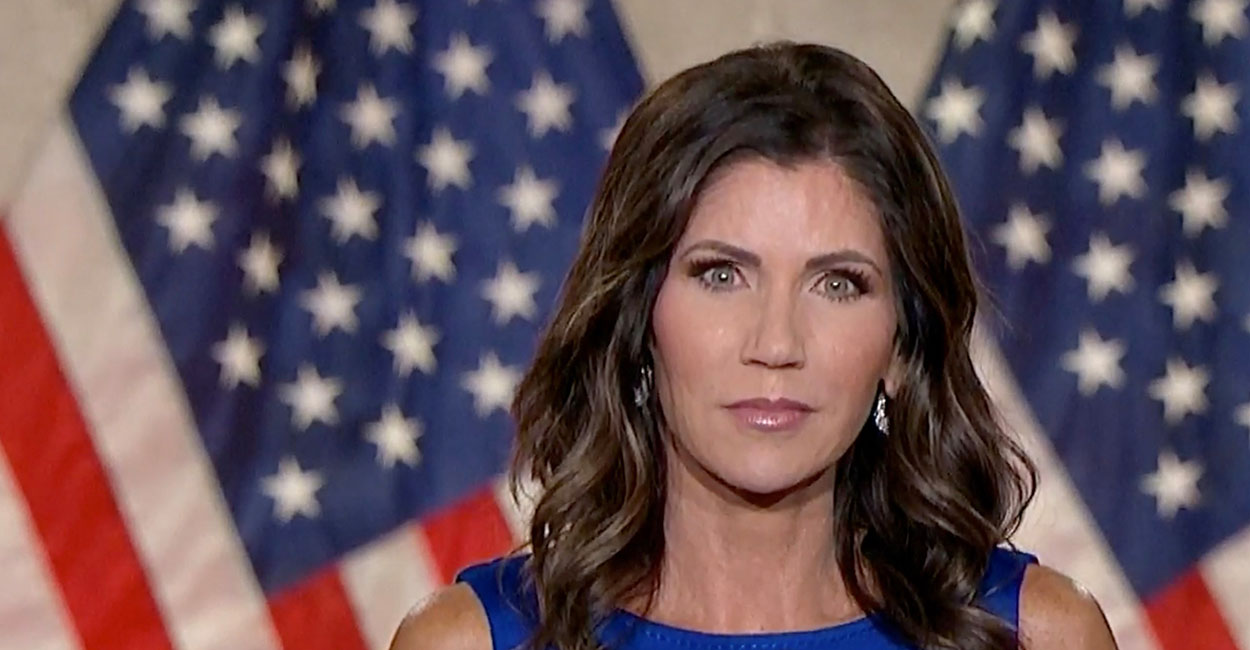 South Dakota Gov. Kristi Noem, a Republican, directed her state Department of Health to terminate a contract with The Transformation Project, a transgender activist group that is hosting a “Gender Identity Summit” next month, after The Daily Signal drew the governor’s attention to the summit and the group.

“Gov. Kristi Noem is reviewing all Department of Health contracts and immediately terminated a contract with The Transformation Project,” Ian Fury, Noem’s chief of communications, told The Daily Signal on Friday. “The contract was signed without Gov. Noem’s prior knowledge or approval.”

Fury sent The Daily Signal a copy of the document dissolving the state contract.

“South Dakota does not support this organization’s efforts, and state government should not be participating in them,” Noem told The Daily Signal in a statement provided by Fury. “We should not be dividing our youth with radical ideologies. We should treat every single individual equally as a human being.”

Fury said that The Transformation Project had not complied with its state contract. The organization had failed “to submit required quarterly reports for two consecutive quarters,” among other violations.

Noem terminated the contract after The Daily Signal reached out with questions about a “Gender Identity Summit” that the state’s largest employer, Sanford Health, will host next month with The Transformation Project. The project celebrates controversial medical interventions for minors and hosts events in which people ritually “burn” their “old name or pronouns.”

The third annual Midwest Gender Identity Summit will take place Jan. 13 at the Sanford Research Center in Sioux Falls, South Dakota. According to its website, Sanford Health is “the largest rural health system in the United States.” It serves more than 1 million patients and 220,000 health plan members across 250,000 square miles. It operates 47 medical centers and employs 2,800 physicians.

Minnesota-based Alpha News first reported the event, drawing attention to The Transformation Project, which puts forth as its mission “supporting and empowering transgender youth.” Attendees can earn up to 6.5 professional education credits.

The gender identity summit will include multiple workshops supporting the view that many biological males actually are female and vice versa, and these people are likely to commit suicide unless doctors give them drugs that stunt their growth, introduce what critics call a hormone disease into their bodies, and perhaps even remove healthy body parts. The summit frames this experimental medicine as “gender-affirming care.”

Presenters include left-wing activists and social-justice-minded medical professionals such as Dr. Mayson Bedient (who identifies his pronouns as “he” and “they”), Cody Ingle (a staffer at a suicide prevention nonprofit who includes “LGBTQ+ advocacy” on his LinkedIn profile), and Natasha Smith, Sanford’s head of diversity, equity, and inclusion.

The Transformation Project opposed a bill to make it a felony in South Dakota for doctors to perform sex-reassignment surgeries on children or prescribe them so-called puberty-blocking drugs that would stunt their natural growth. In opposing this bill, the project highlighted the story of a 14-year-old boy, claiming that “hormone blockers saved his life.”

In the first edition of its Transforming South Dakota magazine in 2019, The Transformation Project featured the stories of gender-confused children and teens. It recounted the story of Cameron, who questioned his gender at age 5, and Sebastian, a 14-year-old girl who came to identify as “nonbinary” at age 11.

The project also holds an annual event where participants, including children, ritually burn their “old name or pronouns.”

The South Dakota Department of Health had hired The Transformation Project to “Create a Community Health Worker (‘CHW’) Program with ‘at least one certificate-level CHW.’” The Centers for Disease Control and Prevention—which certifies community health workers—defines CHWs as “trained public health workers who serve as a bridge between communities, health care systems, and state health departments.”

“The Midwest Gender Identity Summit has a singular objective—to normalize a destructive belief that being male and female is irrelevant to identity,” Penny Nance, CEO and president of Concerned Women for America, told The Daily Signal on Friday. “The sponsors preach that children are ‘born in the wrong body’ if they don’t feel like the boys or girls they are created to be.”

“Sanford Health has bought into this notion by sponsoring this summit,” Nance added. “The goal is not health care but peddling an ideology that confuses children and fuels the lucrative gender reassignment market. Governor Noem should do everything in her power to protect South Dakotans from this intrusion of trans activism that threatens our kids.”

“Trusted medical professionals should be counted on to ‘do no harm.’” Linda Schauer, Concerned Women for America South Dakota state director, told The Daily Signal. “South Dakotans want young people to be healthy and happy in the sex that God created them to be. So why is Sanford Health promoting this summit?”

“Rather than push children towards a ‘gender identity’ delusion, Sanford should be helping kids determine the underlying cause of their distress,” Schauer added. “We wouldn’t tell a child suffering from anorexia that she’s fat and withhold food.”

“Apparently, Sanford is more concerned about their ratings with activist groups and boosting their profit line from lifetime dependence on gender drugs and surgeries at the expense of our children’s health and wellbeing,” she concluded.

“This gender summit is one more example of Sanford Health peddling for profit instead of protecting people,” Norman Woods, director of the Heritage Family Alliance, told The Daily Signal. “The summit website uses words like ‘care’ and ‘affirmation,’ but we all know that’s woke code language for castrating children and mutilating their genitals. It’s time for people to rise up and boldly defend the children being experimented on under the false banner of ‘affirmative care.’”

Woods noted that the South Dakota Legislature will introduce another bill next year aiming to stop these surgeries and injections, and his organization will work with sponsors to pass it.

State Rep. Fred Deutsch, R-Codington County, introduced the 2020 bill that was opposed by The Transformation Project.

“I introduced legislation in 2020 that would have made it a felony for a physician to attempt to change or affirm a minor’s perception of the minor’s sex, if that perception was inconsistent with the minor’s sex,” Deutsch told The Daily Signal. “I continue to believe it is a crime.”

“Children should have the chance to grow up to make informed decisions as an adult about life-changing, irreversible, and experimental medical procedures,” he added. “Sanford is a very powerful worldwide organization complicit in harming many children.”

Neither Sanford Health nor The Transformation Project responded to The Daily Signal’s requests for comment.