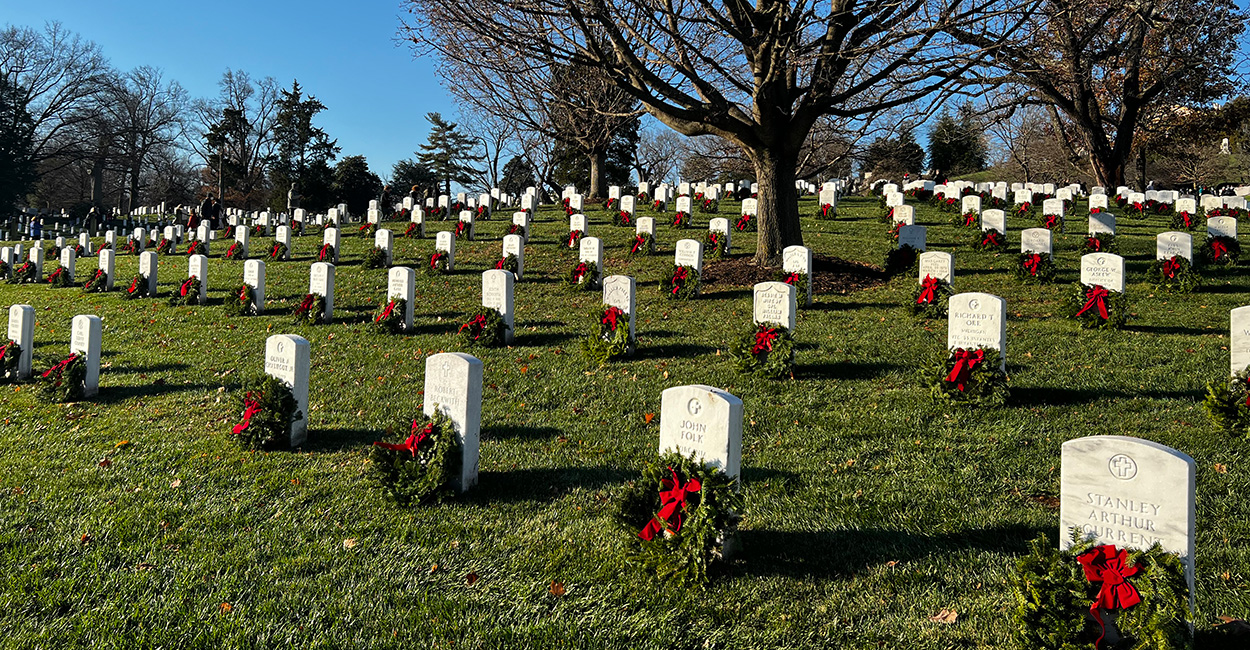 It was just above freezing early Saturday when thousands of Americans arrived at Arlington National Cemetery just outside Washington, D.C. The army of volunteers bundled in their winter coats spent the morning laying about 257,000 live balsam wreaths on the white gravestones of fallen service members.

Thousands of volunteers helped lay the wreaths that arrived from Maine in more than 60 tractor trailers.

For those who have lost service members, like Cindy Tatum, the annual wreath laying event holds special significance.

The pain of loss is turned into service through the wreath laying, Tatum told The Daily Signal, because “you can’t focus so much on the grief when you’re serving others.”

Tatum’s son, Marine Cpl. Daniel Lee Tatum, had completed two tours in Iraq and was stationed at Marine Corps Base Camp Pendleton in southern California when he was in an accident that claimed his life on Dec. 24, 2007.

“Our knock on the door literally came on Christmas morning,” Tatum said, adding that because of the season of her son’s death, the wreath laying “is such an important thing.”

Tatum’s son is buried at home in Tennessee. The soldier’s younger brother placed a wreath on his grave Saturday morning while Tatum and her husband walked alongside many other gold star families as they placed the wreaths on the headstones spread across Arlington National Cemetery’s more than 600 acres.

Tatum served as the national president for American Gold Star Mothers, Inc. in 2020, and today works as the education liaison for Wreaths Across America, the organization responsible for the annual wreath laying at Arlington National Cemetery.

“I’m just led by the good Lord himself, and he’s in charge and always will be,” Morrill Worcester, founder of Wreaths Across America, told The Daily Signal at Arlington National Cemetery when asked what Saturday’s event meant to him.

The story behind Wreaths Across America began in 1992. It was almost Christmas and Worcester’s wreath business, Worcester Wreath Company in Harrington, Maine, had an excess of wreaths that year. The entrepreneur had an idea to send the leftover wreaths to Arlington National Cemetery to be placed on the gravestones in one of the older sections of the cemetery.

With the help of Maine Sen. Olympia Snowe, the Maine State Society of Washington, D.C., and many other generous volunteers, the first wreath laying was a success.

The tradition carried on for a number of years without much attention, but in 2005 Wreaths Across America gained national recognition after an image of the wreaths pressed against each headstone went viral.

Worcester says he had no idea 30 years ago that the event would become what it is now because the wreath laying was only supposed to be a “one-time thing.”

In 2007, the Worcester family, along with a group of organizations, veterans, and other individuals formed the nonprofit Wreaths Across America. Today, not only are wreaths laid in Arlington National Cemetery, but also at more than 1,600 cemeteries and other locations in all 50 states and more than 20 overseas locations. individuals and organizations sponsor wreaths at $15 each.

This year, the nonprofit had “600 trucks come to Maine” to pick up the wreaths and drive them to varies locations across the county, Karen Worcester said. The executive director of Wreaths Across America added that “90% of those were volunteer trucks [and] volunteer drivers.”

The mission of Wreaths Across America is to “remember our fallen veterans, honor those who serve, [and] teach our children the value of freedom,” a mission that is carried out all year long through education initiatives in schools across the country.

“We work year-round to teach people the stories of courage, character, responsibility, and then when they come out to the cemetery, it’s very meaningful for them,” Karen Worcester said.

“We need to teach our kids to love our country,” she said. “And that’s what we’re trying to do.”

Wreaths Across America is working to show the next generation that “to keep this country that we love, we have to be willing to fight for it,” the executive director said.

“That’s tough for a mother and grandmother to say that you want your child to be prepared to fight for this country,” Worcester said, “but to keep all of us free for generations to come, we have to walk the walk, talk the talk, and do what those that are buried in the cemetery here have done before us, and love our country together.”