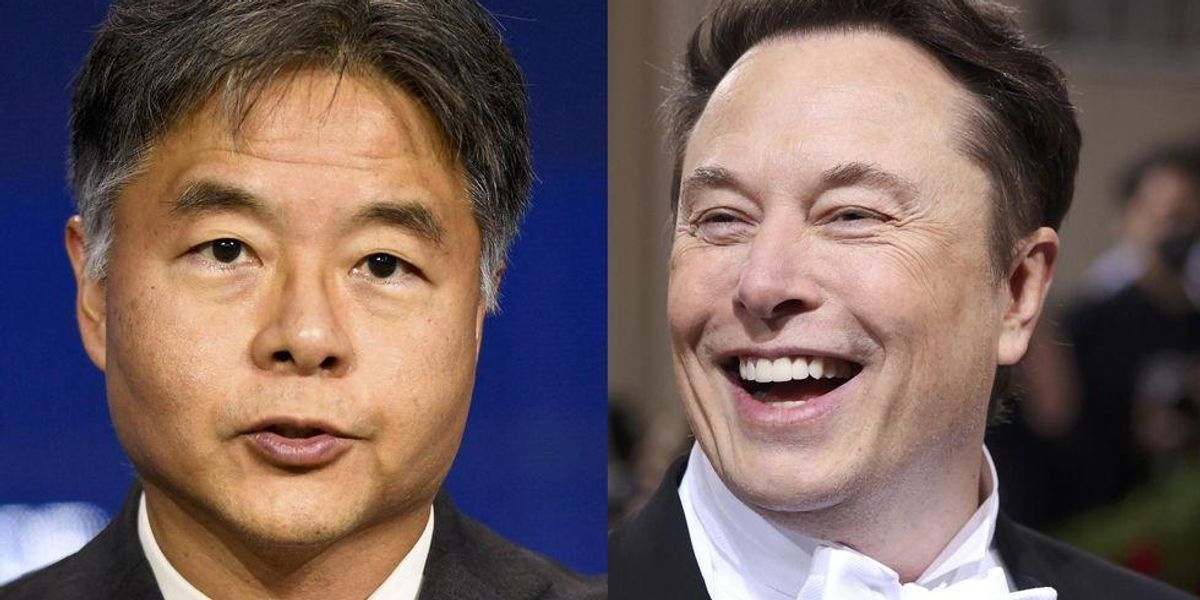 Democratic Rep. Ted Lieu of California shot down a demand from a left-wing activist that Congress drag Elon Musk in to testify about the recent suspensions of several journalists at Twitter.

The billionaire entrepreneur angered many on the left when a handful of journalists were suspended on Thursday over their coverage of an account dedicated to tracking the whereabouts of Musk’s private jet. Musk claimed their reporting on the account constituted a violation of Twitter’s rules against “doxxing.”

Despite some on the left calling for Congressional action against Musk, at least one Democrat resisted.

“No. @elonmusk way overpaid for Twitter and he can basically do whatever he wants with it. The First Amendment prevents Congress from regulating speech on Twitter, a private business. It is not Government’s role to tell Twitter who to ban, who to suspend or who to promote,” Lieu tweeted.

“Would you have wanted the Trump Administration to decide what you can and cannot see on Twitter?” he asked rhetorically.

Among those praising Lieu for his principled stand on the First Amendment was Christina Pushaw, the rapid response director for Gov. Ron DeSantis (R-Fla.).

“Wow, surprising to see this consistency from a liberal,” she tweeted.

Sally Buzbee, the executive editor of the Washington Post, issued a statement demanding that its reporter be reinstated on Twitter immediately.

“The suspension of Drew Harwell’s Twitter account directly undermines Elon Musk’s claim that he intends to run Twitter as a platform dedicated to free speech,” the statement read.

“Harwell was banished from Twitter without warning, process or explanation, following the publication of his accurate reporting about Musk,” she added. “Our journalist should be reinstated immediately.”

Musk has been responding to the fallout from the suspensions by tweeting about them. At one point, he posted a poll asking if those suspended for doxxing should be allowed back immediately, after one day, after seven days, or after longer than seven days. A plurality of 43% voted that they should be immediately returned to Twitter.

Watch a 5-year-old preacher go viral by baptizing his toys, singing with Grammy Award-winning singer: ‘You have lifted us all up’
Ford and General Motors enter a new phase of uncertainty on prices and demand
‘I’m of Puerto Rican descent and I find it offensive’: Democrats seek to ban government use of ‘Latinx’ in Connecticut
FedEx is laying off 10% of its officers and directors amid cooling demand
Why Your Tax Refund Could Be Smaller This Year