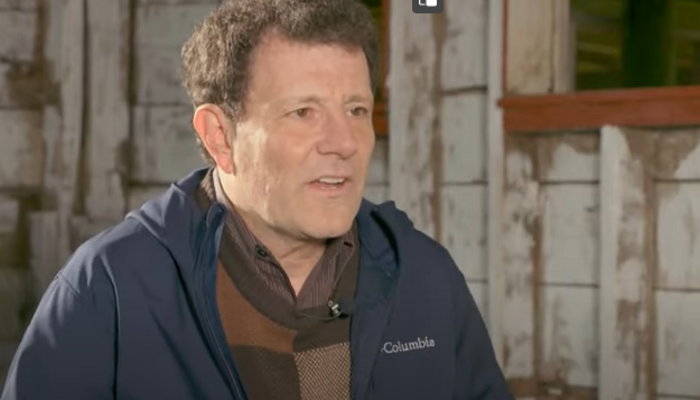 Nicholas Kristof has straggled back to his columnist job at the New York Times, after his failed attempt to run for governor from his home state of Oregon due to residency requirements. A strong critic of the Iraq War, led by Republican President George W. Bush, Kristof has evolved into something of a war-monger, at least when it comes to international interventions by Democratic presidents, in Liberia, Libya, and presently in Ukraine.

Kristof has even called Western courage into question for not wanting to be further entrenched in the Ukraine-Russia conflict.

On Thursday he suggested supporting war was macho in “Are We in the West Weaker Than Ukrainians?” He talked of the horrific treatment of a survivor of Russian torture, then suggested Americans who didn’t back spending billions arming Ukraine lacked courage.

…That brave woman triumphed over her interrogators, albeit at horrific personal cost.

But I worry that we in the West are made of weaker stuff. Some of the most momentous decisions the United States will make in the coming months involve the level of support we will provide Ukraine, and I’ve had pushback from some readers who think President Biden is making a terrible mistake by resolutely helping Ukraine repel Russia.

Remember how angry the left got when they called for America to withdraw from Iraq and were told they were making Saddam Hussein happy?

Polls find American support for aid to Ukraine still robust but slipping, especially among Republicans. And almost half of Americans want the United States to push Ukraine “to settle for peace as soon as possible,” even if it loses territory — a finding that must gladden Vladimir Putin’s heart.

Kristof implied America was weak for letting Ukraine fight our battles for us. Then he played the nuke card.

…bowing to nuclear blackmail and rewarding an invasion would create their own risks for many years to come, and on balance those dangers seem greater than those of maintaining the present course.

Wasn’t a major reason we pursued Hussein in Iraq was the threat of his Weapons of Mass Destruction?

Kristof then made the same kind of moral, humanitarian argument for Ukraine intervention that he dismissed while opining against the Iraq War in 2003.

When one nation invades a neighbor and commits murder, pillage and rape, when it traffics in thousands of children, when it pulverizes the electrical grid to make civilians freeze in winter — in such a blizzard of likely war crimes, neutrality is not the high ground.

Of course, Hussein massacred and terrorized his own people, but that didn’t stop Kristof from fiercely advocating against the Iraq War.

Let’s not let Russia beat the Ukrainian out of us: The world could use a spinal transplant from brave Ukrainians.

Kristof made a similar argument in mid-November: “I Went to Ukraine, and I Saw a Resolve That We Should Learn From.”

Compare that to his perverse, quasi-defense of Iraqi dictator Saddam Hussein in July 2003:

I argued against invading Iraq, but Liberia presents a much more compelling case for intervention. The difference is not that Saddam slaughtered at most 1 percent of his population over the last 14 years, while Liberian warfare has killed more than 6 percent of its population so far.

Defending a murderous dictator by citing a relatively low per capita rate of killing is just bizarre. And unlike Iraq, Liberia never had a nuclear program and had not threatened its neighbors with weapons of mass destruction.