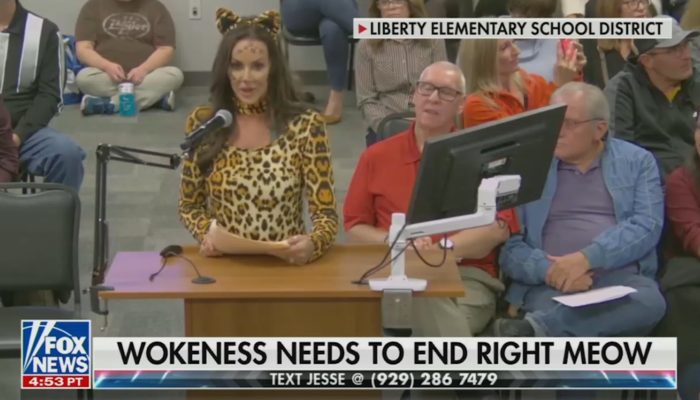 A woman in Phoenix, Arizona pointed out just how woke the Liberty Elementary School District is by dressing as a cat and asking “How many of you believe and confess that I’m a cat?” The woman, Lyndsay Graham, proceed to call out the school board for its obvious progressive agenda. 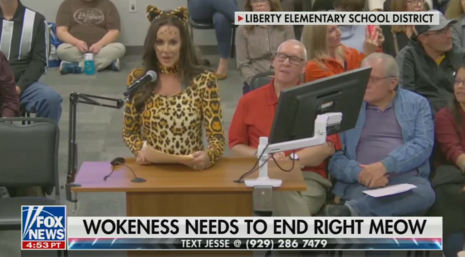 “I’m a cat. Meow, meow. I’m not a woman dressed as a cat. I am a cat. How many of you believe and confess that I’m a cat?” she asked. “How many of you believe that your child or a child from this school would believe that I’m actually a cat? No one. You’re right. Truth prevails over imagination. Reality exists. Discernment is innate and something that we’re wired to have. One look at me, and you know this to be true. I’m a woman posing as a cat.”

She seemed nuts but, that was the point.

It seems like public schools have been doing nothing but pushing delusion to children. Instead of teaching about math, writing or how to freaking read, schools are focused on helping Jimmy identify as ze/zer, helping Sarah become Sam and allowing Timmy to pretend he’s an inanimate object.

In the school where Graham spoke, a board member supposedly identifies as a woman and parades around the school sending a “confusing message” to elementary students. Supposedly Paul Bixler’s wife died and then he decided to become a she. “The only thing he does to identify as a female is put lipstick on. He grew his hair out a little bit, and he wears his deceased wife’s clothing to school, to sporting events, to school events to fundraisers, school events in front of the children,” Graham told Jesse Watters on Fox News Tuesday.

Creepy way to mourn the loss of a loved one.

Nonetheless, schools, especially one with this individual, are showing that frankly, they’re effed. Mrs. Graham was simply pointing that out.

As a matter of fact, Graham explained her motives to Watters in the same segment.

The point I was trying to make as a cat was that obviously you can’t just identify as whatever you want and demand that other people identify you as whatever you want. But someone with this kind of mental illness can enjoy that mental illness all they want in the comfort of their home. But when you put them in charge of children, we’re talking about a new type of indoctrination, and that’s what’s really terrifying, is seeing these people in charge of our kids’ education.

Evidence of the indoctrination keeps coming up. Last week a teacher explained how she removed kids from their academic classes to get them to join her Gay Straight Alliance club meetings. One school had a “polysexual art” display. Other schools are trying to get after school Satan clubs set up and others admittedly prioritize “inclusivity” over actual learning.

The cat lady’s display was a great indicator of just how woke schools are and is a great encouragement for people to fight against indoctrinating and grooming policies and regimes.