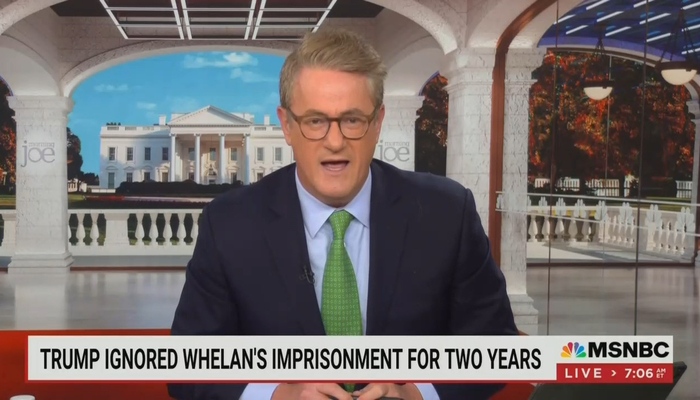 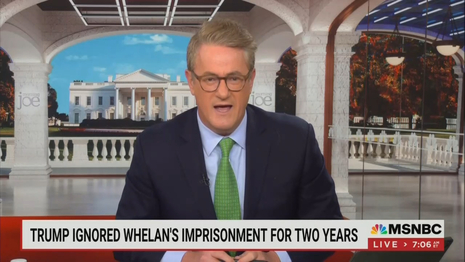 On Monday, the “independent fact-checkers” at Snopes.com explored “Did the Trump Admin Agree to Free 5,000 Taliban Prisoners?” They ruled this was “True.” But they were not evaluating MSNBC morning host Joe Scarborough, who repeatedly made the false statement on Friday and Monday that Trump received “nothing in exchange.”

This question surfaced on social media following the release of Brittney Griner from a Russian prison. https://t.co/bV5nuz4qWn

Jordan Liles presented the part of the agreement that’s relevant, which said that 5,000 Taliban prisoners would be exchanged for up to 1,000 prisoners “of the other side”:

The United States is committed to start immediately to work with all relevant sides on a plan to expeditiously release combat and political prisoners as a confidence building measure with the coordination and approval of all relevant sides. Up to five thousand (5,000) prisoners of the Islamic Emirate of Afghanistan which is not recognized by the United States as a state and is known as the Taliban and up to one thousand (1,000) prisoners of the other side will be released by March 10, 2020, the first day of intra-Afghan negotiations, which corresponds to Rajab 15, 1441 on the Hijri Lunar calendar and Hoot 20, 1398 on the Hijri Solar calendar. The relevant sides have the goal of releasing all the remaining prisoners over the course of the subsequent three months.

In addition, Democratic House Speaker Nancy Pelosi at that time called the agreement “an important initial step toward advancing security and stability in Afghanistan,” adding that, “many significant additional steps remain to achieve comprehensive and enduring peace.”

Snopes cited a Congressional Research Service report that said, “The prisoner exchange was completed in early September 2020, removing the main obstacle to intra-Afghan talks. Talks between the two sides continue but have not made substantial progress and remain complicated by a number of factors.” Somehow, Liles thought there was a loophole in there. Despite the clear phrasing “the prisoner exchange was completed,” he suggested “This indicated that the Taliban prisoners were released without both sides agreeing to terms.”

But don’t let the concept of a completed “prisoner exchange” disturb Scarborough! He was on a roll. In reacting to criticism of the Griner swap, we counted ten separate denunciations of Trump letting Taliban terrorists go for nothing on Friday and Monday:

FRIDAY:
6 am: “A lot of the Trumpers that are out there, of course, the same people who defends a president who sits down with Nazis and fascists. They’re sitting there screaming about what a horrible deal this is, somehow forgetting that Donald Trump released 5,000 Taliban terrorists, didn’t get anybody in exchange.”

7:06 am: ”He didn’t give a damn that Putin arrested Whelan and let him rot in jail for three years. Instead, no, he was negotiating with the Taliban, and he freed up 5,000 Taliban terrorists. What did he get in exchange? Nothing. He got nothing in exchange!

6:10 am: “This comes from the man who releases 5,000 Taliban terrorists. And gets nothing in return.”

7:21 am: “Tom, the fact that you have all of these Republicans claiming Joe Biden was a terrible negotiator, and what Donald Trump did with the Taliban, releasing after 5,000 Taliban terrorists, getting nothing in exchange.”

8:04 am: “Again, Mike Barnicle, what’s so fascinating about that is, this comes, of course, from the same man who let 5,000 members of the Taliban go for nothing.”

9:00 am: “They didn’t like prison swaps where you would trade one for another. What they liked to do is they were in the business of letting 5,000 Taliban terrorists go free.”

SCARBOROUGH: But you want to break the news to him that Mike Pompeo and Donald Trump and Mike Pence signed off on releasing 5,000 Taliban terrorists? And you know what we got in return? Nothing. Got nothing in return. So Trump is negotiating against himself. I’ll tell you what –

BRZEZINSKI: The worst negotiator on Earth.

SCARBOROUGH: We’ll give you   5,000 Taliban terrorists, what did you exchange? Nothing.

BRZEZINSKI: The art of the deal.

How Much Destruction Are Americans Willing to Take?
‘Biden told them to come’: Arizona border city on brink of collapse from illegal immigration, officials say
‘His art gives us hope’ Art dealer claims Hunter Biden ‘will become one of the most consequential artists in this century’
NewsBusters Podcast: Joy Behar Cries ‘Mental Illness’ on Gun Rights
Will The New Shadow President Be Better Than Ron Klain?