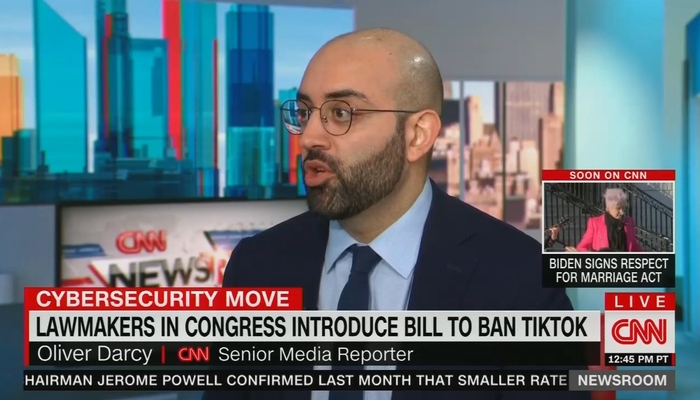 It appears that the familiar liberal media “Republicans pounce” angle has reached a new frontier for CNN, and it involves defending the Chinese Communist Party-linked TikTok.

A Dec. 13 CNN “analysis” by CNN Senior Media Reporter Oliver Darcy distracted from the actual threat posed by TikTok, a widely used U.S. app that is linked to and may be feeding U.S. user data to the Chinese Communist Party (CCP). The headline said it all: “Ban TikTok? How Republicans are ‘playing to the Fox News crowd’ with attacks on the social media app.” In 2021, TikTok parent company ByteDance sold a 1-percent stake to a Beijing company owned by three Chinese state entities. The deal allowed the Chinese government to appoint a board director to ByteDance.

Darcy’s story scoffed at a bill proposed by Sen. Marco Rubio (R-FL) on Dec. 13, to ban TikTok from operating in the U.S.

The bill “reflects a new trend sweeping across the country in which Republicans showcase how hawkish they are on China by taking a hardline stance on TikTok with proposals or the enactment of legislation and rules that do little to actually limit its broad reach,” Darcy wrote.

“‘It’s playing to the Fox News crowd,’ a person close to TikTok, who requested anonymity because they were not publicly authorized to speak on the matter, said on Tuesday,” Darcy wrote. “The person noted that many of the lawmakers expressing concern about China’s influence are ironically expressing such sentiments from their Chinese-made iPhones.”

The iPhone argument is weak. TikTok has been directly accused of funneling users’ data back to Beijing, presenting a major national security threat.

So, Darcy’s snarky attempt at irony simply doesn’t hold up.

“The type of action being taken by Republicans seems more geared toward playing to their base than anything else,” Darcy wrote. “That’s the point that TikTok tried to make on Tuesday. Spokesperson Hilary McQuaide said in a statement, ‘It’s troubling that rather than encouraging the Administration to conclude its national security review of TikTok, some members of Congress have decided to push for a politically-motivated ban that will do nothing to advance the national security of the United States.’”

Conservatives are under attack. Contact your representatives and demand that Big Tech be held to account to mirror the First Amendment while providing transparency, clarity on “hate speech” and equal footing for conservatives. If you have been censored, use the CensorTrack contact form to help us hold Big Tech accountable.