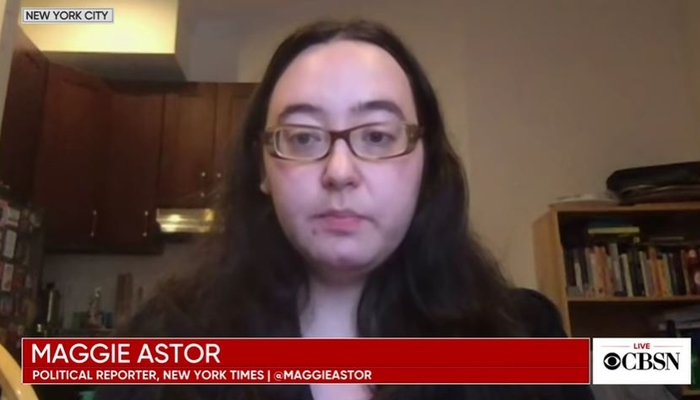 Against stiff competition, New York Times’s Maggie Astor has proven herself one of the most liberally biased reporters at the paper, whether she’s condemning any criticism of vice-president Kamala Harris as racist or blaming Donald Trump for violence against transgenders.And on Sunday, she took on conservative criticism of “groomers” and transgender activists, and the results were no more edifying: “Transgender Americans Feel Under Attack as Political Vitriol Rises.”

Committing bias by omission, Astor ignored chic fashion label Balenciaga’s bondage-themed ad campaign featuring child models, and displayed no concern about transgender activists encouraging children to question their gender while pushing transformation surgery. Instead, protest of transgender activism was howled down as a step on the path to mass murder of transgenders.

As an L.G.B.T.Q. rights advocate and a transgender woman, she has received death threats, and her and her family members’ personal information has been published. When she goes to her favorite bar in New York, she sometimes wonders what she would do if someone came in shooting.

But last weekend, it became too much. Members of the Proud Boys and other extremist groups, many of them armed, converged outside a planned drag event in Columbus, Ohio. Neo-Nazis protested another event in Lakeland, Fla. There was an anti-L.G.B.T.Q. rally in South Florida, also attended by the Proud Boys. All of this just two weeks after the killing of five people – two of them transgender, a third gay — at an L.G.B.T.Q. club in Colorado Springs.

It was one more month in a year in which intimidation and violence against gay and transgender Americans has spread — driven heavily, extremism experts say, by inflammatory political messaging.

It’s surprising she didn’t pull out the “stochastic terrorism” canard.

Astor was angered over the accurate charge of “grooming.”

Over the past couple of years, it has become routine for conservatives to liken transgender people and their allies to pedophiles, and to equate discussion of gender identity with “grooming” children for sexual abuse — part of an intensifying push, reminiscent of campaigns against gay rights dating back to the 1970s, to turn increasing visibility of transgender Americans into a political wedge.

She waved away concerns about biological males crowding out actual females from women’s sports, even though her own paper has proudly spotlighted some of them.

Conservatives say they are trying to protect children from irreversible treatments and ensure women’s sports remain fair; in midterm election ads, right-wing groups argued that transition care amounted to “radical gender experiments” and that allowing transgender athletes to compete on teams matching their gender identity would “destroy girls’ sports.” (The treatments offered to transgender children are endorsed by medical associations and have been shown to reduce suicide risk, and few transgender women and girls seek to participate in women’s and girls’ sports.)

“Many drag performances aren’t sexual” has to win a prize for the lamest rebuttal to the fact that children have been spectators at sexualized drag shows.

Not even generic hyperbole was immune from Astor, who must fancy herself a fastidious fact-checker but has spread more than her share of misinformation, including the timeless “Transgender women of color led the uprising at the Stonewall Inn.”

The bill’s sponsor, State Representative Braxton Mitchell, a Republican, responded to a request for comment by asking why it was “all of the sudden a critical requirement for someone in drag to be in every school,” but would not provide an example of any official calling for that. He described drag shows as adult entertainment; while some are, many are “story hours” where performers read books.

College Board admits defeat at the hands of Ron DeSantis, and liberals are outraged: ‘A win for fascist intimidation’
Biden to Send Ukraine ANOTHER $2.2 Billion in Military Aid – Including Long-Range Missiles: Reuters
‘Black people can harbor anti-Black sentiments’: CNN commentator argues former officers charged in Tyre Nichols’ death could have been influenced by racism
AP Stylebook recommends against ‘dehumanizing ‘the’ labels,’ like ‘the French,’ then deletes post due to ‘inappropriate reference to French people’
California’s Radical Effort to Transform America’s Auto Industry: Not Your Forefathers’ Idea of Federalism