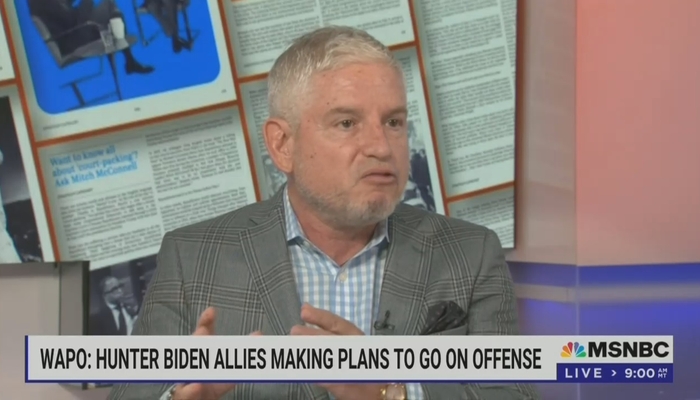 Liberal slime merchant David Brock has emerged from the woodwork again. This time, he’s leading a counter-attack on the GOP-majority House committee that will be investigating Hunter Biden’s influence-peddling schemes and the possible connections to his father the president.

Brock appeared on MSNBC’s The Sunday Show with Jonathan Capehart. The host claimed maybe he’s watched too much House of Cards and is a big Scandal fan, but when he heard Brock say that he is going on “offense” he wondered just how far Brock would go, and whether it would include “focusing in on the people who are leading [the investigations] and running them?”

“We’re going to go on offense. Are we going to expose some of the Republicans on the committee? Sure we are.”

Translation: Brock and his Democrat buddies will be turning up their anti-Republican scandal-mongering machine to 11. Capehart sounded thrilled: ”You’re going to have to come back to the Sunday Show and tell us, preview what you got!”

Note that Brock broke out some shopworn tactics to counter the allegations against Hunter Biden. Brock claimed that the allegations have been “asked and answered,” that they’ve supposedly been investigated “ad nauseam” and that “this is nothing but a bunch of recycled conspiracy theories.”

Brock even claimed that Hunter’s laptop showed that Joe Biden was an “empathetic father trying to help his son.” If that’s all that was on the laptop, why did Democrats conspire with Twitter and the rest of the liberal media to suppress and discredit the laptop as a Russian misinformation campaign? This is the spin you use to distract from Joe meeting with Hunter’s clients when he said he never talked business with his son.

Brock also claimed that the Republican investigation represents the “sick politics of demonizing addiction and mental health issues.” No: it’s about whether Joe Biden was aware of Hunter’s illicit influence peddling, and even perhaps, as “the big guy,” was skimming a share of the ill-gotten proceeds. 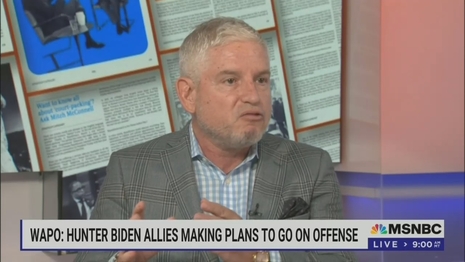 David Brock has created a “SWAT team” to go after Republicans?? And the Democrats accuse Republicans of inciting political violence??

This MSNBC preview of how the Democrats are going “on offense” to slime Republicans was sponsored in part by Weather Tech, Subaru, USPS, GoDaddy, and Clear Choice.

JONATHAN CAPEHART:  We start with the latest around Hunter Biden. According to new reporting in the Washington Post, a coalition of Hunter’s allies won’t sit quietly as Republicans prepare to make him a national figure in their investigations when they take over the House in just a few weeks. For years, the GOP has claimed the president’s son has traded on his name in shady business deals and that President Biden is culpable for his son’s alleged misconduct. The Bidens have denied any wrongdoing. Joining me now is one of those allies, David Brock, President of Facts First USA. David, thank you very much for coming to the Sunday Show.

DAVID BROCK: This has been asked and answered in 2020. It’s been investigated ad nauseam. It’s been looked at by a Senate committee, by Rupert Murdoch’s Wall Street Journal. They found nothing!

So, I met with Hunter Biden and his lawyers back in September as part of a due diligence for this project. And I came out of that, Jonathan, very confident that we are going to be able to show over time that this is nothing but a bunch of recycled conspiracy theories.

And they’re going to hurt themselves, I think, by investigating this. Because at the end of the day, part of the story is kind of a sick politics of demonizing addiction, and mental health issues that are in many, many families.

We know that the laptop shows that President Biden was an empathetic father trying to help his son. We don’t need a congressional investigation for that, Jonathan. But we unfortunately are going to have one. And we’re going to have one because Kevin McCarthy can’t get to 218 votes. And so, he’s making this corrupt bargain, all these deals on the side. With Marjorie Taylor Greene and Gosar to have more aggressive investigations, to change rules. Everything they want, they’re getting. The MAGA extremists. And we need to educate the public about what’s behind this.

CAPEHART: Maybe I’ve been watching too many episodes because I’ve been, I’ve rewatched House of Cards. I was a big scandal fan. So my imagination is very big when it comes to these things. When I see the word, the phrase, going on offense, I go down some very dark, very dark and deep holes here in terms of what that offense could look like.

BROCK: It’s both. But this is an offensive posture that we’re taking here. Now, we’re calling it Facts First. But we all know, and we’re going to have to cross every T and dot every I and always have our facts in line. But we know that in this environment, facts don’t always triumph. So there need to be counter-narratives. The Hunter-hater narrative is out there. It’s been out there for three years. As I said, it’s nothing new. But we need our own counter-narratives out there. And we need to educate the public. And tell them what’s behind all this.

And so, we’re going to go on offense. Are we going to expose some of the Republicans on the committee? Sure we are.

BROCK: What does it mean?

CAPEHART: You’re going to have to come back to the Sunday Show and tell us, preview what you got!