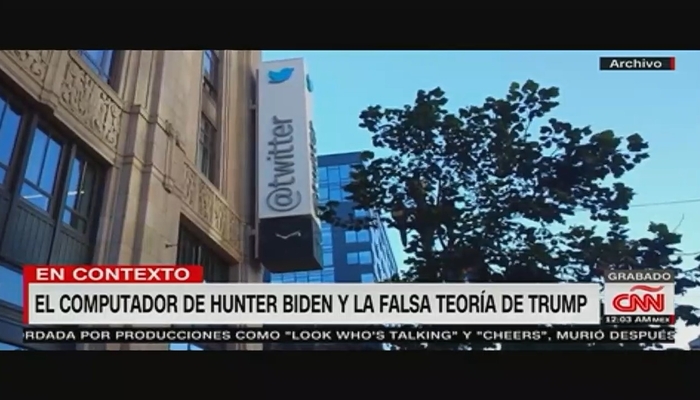 Over two years have passed since Twitter censored the New York Post’s story on Hunter Biden’s “Laptop From Hell”. We continue to learn about the internal processes behind the censorship, but CNN En Español insists on trying to avoid any substantive coverage of the story while gaslighting the public it claims to serve.

Whereas Univision and Telemundo simply avoided mention of the laptop and made their Twitter Files reporting all about Donald Trump, CNN En Español attempted to redirect the story by suggesting that the story was primarily about the sexually suggestive photos found in the laptop, as opposed to details about the peddling of influence while Joe Biden was Vice President of the United States.

JUAN CARLOS LOPEZ, CNN EN ESPANOL: In October of 2014, the tabloid New York Post published information relating to a laptop that Hunter Biden, son of then-presidential candidate Joe Biden, had dropped off for repairs at a shop in Delaware, and never reclaimed. Twitter decided to restrict (both) the article and dissemination of materials included therein. Elon Musk, owner of Twitter, announced on Friday the publication of (Twitter’s) internal communications,  but did so in a selective manner and without revealing anything that wasn’t already known.

For example, that there was an internal deliberation at Twitter over existing doubts regarding the origins of the material, that the government suspected that there could be Russian influence in the publication of the files on Hunter Biden’s laptop, and that although publication of the article was not allowed on Twitter, it was available on several other sites, including (that of) the New York Post.

In Republican circles, among those closest to Trump, there is talk of alleged censorship, and violation of the First Amendment. But that amendment, which guarantees freedom of speech, bans the government from censoring. Digital platforms are not bound by that amendment. By law, they have the power to moderate user content.

Another allegation is that the government, through the FBI, threatened Twitter against publishing
information on the Bidens. But the government at that time was presided by… Donald Trump.

The emails released selectively by Elon Musk show that this did not happen. They also show that both the Trump White House and the Biden campaign had a direct line to Twitter for requests to remove inappropriate content. In the case of Hunter Biden, (the Twitter Files) reveal that the content that they asked to be removed were intimate photos of Hunter Biden, the publication of which violated Twitter’s policy on inappropriate content.

The inappropriate content which led to this dispute are intimate photos of intimate parts of the son of the then-presidential candidate who then became president- of Joe Biden.

Lopez’ redirection is something to behold. Not only does he claim that there was nothing new in the first installment of the Twitter Files, but that the New York Post wasn’t really censored, and that the decision to censor was about Hunter’s skin pics. More noteworthy is Lopez’ admission that the laptop was, in fact, abandoned in a Delaware repair shop- and therefore an admission of authenticity. Contrast with what Lopez said in 2020, when he deemed the “Laptop From Hell” story to be “slanderous”:

JUAN CARLOS LOPEZ: The crime would be to report slanderous information. The crime would be to not do our jobs. President Trump can be upset, he can be outraged, but if the information is not verifiable it cannot be published. There is a debate over freedom of expression, and those who consider that they can say whatever they want and they can say it. But we, as a media outlet, only report and publish the information we verify- to not do so would be irresponsible. For that reason, regardless of how many attacks may come from the president, that information remains suspicious and has little credibility.

Then, as now, Lopez reports the distraction rather than the uncomfortable actual story.

It also seems that Lopez has jumped the gun on his First Amendment defense of Twitter 1.0’s moderation policies. What’s he going to do when Elon Musk releases communications from government officials requesting the suspension of Covid dissident accounts (such as Alex Berenson)?

Those wondering why new CNN leadership is pivoting CNN En Español to do more entertainment need wonder no more. Might as well do entertainment if you’re not going to report the news.

This propaganda was brought to you by Jeep. Their information can be found here.

Alzheimer’s Association ends brief partnership with pro-assisted-suicide group: ‘We deeply regret our mistake’
Air Force General Predicts U.S. Will Be At War With China In 2025: ‘I Hope I Am Wrong’
Killing of Tyre Nichols: Senseless Inhumanity in Memphis
White Privilege Virtue-Signaling Scarborough: I Wouldn’t Have Been Beaten Like Tyre
Director of homeless shelters says handouts make homelessness worse, and outraged activists want him fired