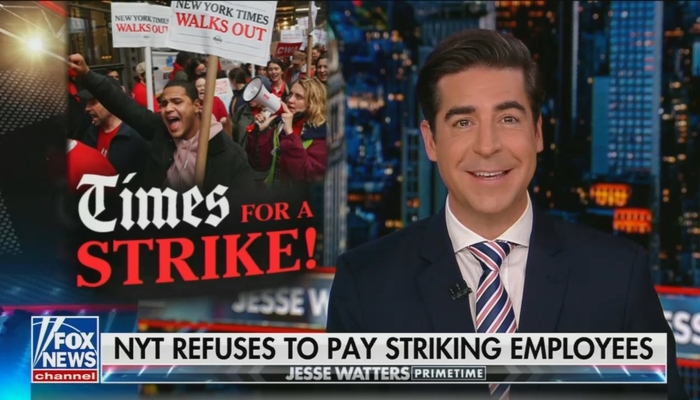 The chickens at the woke New York Times have come home to roost.

After a forever of accusing this or that Republican of being racist, the white-owned Times is now facing its woke employees who are accusing the paper’s owner of, you guessed it, being racist. 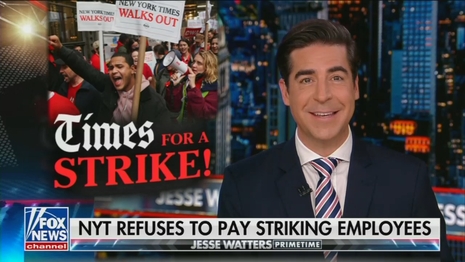 As Fox’s Jesse Watters noted this week, there is an open “revolt” going on inside The Times. And ohhh the irony.

Over 1,000 Times employees stormed out of the paper for a “24 hour strike” over what they called “insulting” contract negotiations. At issue is a ten percent hike in pay — which The Times owner, A.G. Sulzburger, has been unwilling to grant.

Jesse had video footage of the strikers carrying signs that read “New York Times WALKOUT.”  With more than a little amusement, he pointed out that the very people demanding that their pay be increased to keep up with inflation were working for a paper that ran stories with headlines like “179 Reasons You Probably Don’t Need to Panic About Inflation” and “Growth Is Surging.” The Fox chyron below the images of those headlines read: “NYT: Trust Us. Economy Is Doing Great But We Still Can’t Afford Raises.”

He also noted that the paper had subscribers dollars flowing into The Times coffers, with the paper’s management getting big bonuses, yet the papers rank-and-file employee “peasants” haven’t gotten a raise in two years.

This is the same paper that demands the minimum wage be raised — and raised right now.

Particularly priceless was the video that showed The Times’ Pulitzer Prize-winning reporter Nikole Hannah-Jones. She is the author of The 1619 Project: A New Origin Story, which tries to say that the United States founding was all about, yes, slavery. Racism. Jones was a hero to the Times and lefties across the land.

But now? Now Jones was out in front of The Times headquarters, microphone in hand, saying this:

We’re asking that a committee on diversity be established to identify groups underrepresented at the company. A diversity initiative that doesn’t touch management is not a diversity initiative. And the fact that our management team at the bargaining table has yet to confirm and work to correct the Guild’s findings on racial disparities in our employment and evaluation system, it has become clear that this is more than about a contract.

When individual strikers were asked what The Times was doing, since the paper is pro-union? Repeatedly, strikers said “that’s a very good question.”

Notably, The Times has responded by saying that no striking worker will be paid — until they come back to work.

Oh yes, there was another Fox chyron flashed as The Hill’s media reporter Joe Concha helped dissect all of this. It read:

So what do we have here?

What we have is a woke left-wing paper hoist on its own woke leftist petard. They want woke? Then they are getting woke dished up fresh and hot. They spend their time calling any Republican or conservative a racist? The fickle finger of hate has now inevitably swung around to them and the paper’s chairman, A.G. Sulzberger.

Interestingly, Sulzberger is the descendant heir of the original owner in the family, Adolph Ochs, who purchased the paper in 1896. New York Post reporter Michael Goodwin, a former Times reporter himself, took a look in 2020 at the Times-owning family with this headline:

The family that owns the New York Times were slaveholders

Goodwin began by reporting this: “It’s far worse than I thought. In addition to the many links between the family that owns the New York Times and the Civil War’s Confederacy, new evidence shows that members of the extended family were slaveholders.”

In chapter and verse, Goodwin lays out the family’s racist roots. He notes that The Times, among other things, once…

….published an editorial in 1900 saying the Democratic Party, which Ochs supported, “may justly insist that the evils of negro suffrage were wantonly inflicted on them.”

Six years later, the Times published a glowing profile of Confederate President Jefferson Davis on the 100th anniversary of his birth, calling him ‘the great Southern leader.’”

Now, in the middle of the current “24-hour strike” there is the paper’s own Nikole Hannah-Jones was essentially saying that nothing at The Times has changed. It’s still racist. Ouch.

What happens next? Who knows. But one thing seems certain. Having repeatedly pushed a woke agenda and accusing Republicans of racism, The New York Times is now face to face with the monster it helped nourish if not create. Being woke and white has come back to bite.

Joy Reid: ‘What Happened to Tyre Nichols Was as American as Apple Pie’
Tesla car battery ‘spontaneously’ bursts into flames on California highway, firefighters need 6,000 gallons to put it out
General Motors doesn’t expect significant U.S. production of EVs until second half of year
Are You Ready for the Trump vs. DeSantis Showdown?
Bodycam footage shows Tyre Nichols calling for his mother as he is beaten by officers before his death