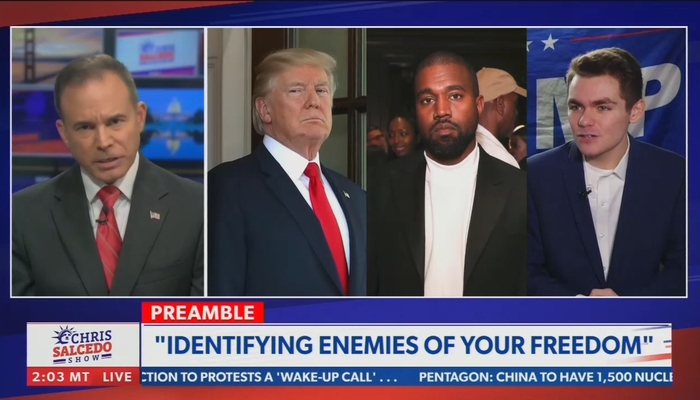 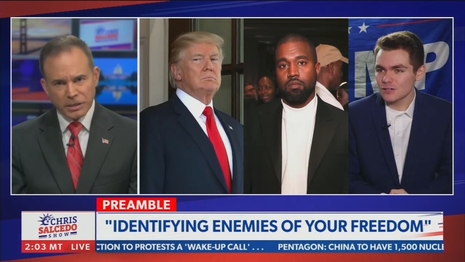 Well, bravo. Over there at NewsMax, Chris Salcedo, the host of “The Chris Salcedo Show”, nailed it exactly when covering the dust-up over the Trump-Kanye West dinner that, unknown to Trump, would include decided anti-Semite Nick Fuentes.

The problem? The liberal media instantly jumped on the dinner – and that’s fine. Salcedo himself pointedly noted that Ye had been spewing anti-Semitism and he, Salcedo, condemns anti-Semitism no matter where it comes from. He’s right, of course. There’s no room for anti-Semitism and white supremacism in America — period. But as Chris vividly illustrated, this liberal media outrage strangely disappears when the anti-Semitism is coming from, yes, anyone on the left.

In his preamble segment, titled “Identifying Enemies of Your Freedom”, he made the point that one of the “biggest threats to your freedom” is leftist media pushing narratives instead of actual news. He went on:

“The press has been obsessed with anti-Semitism” since the news of the Trump dinner emerged he says. Then, pointedly, saying he has looked at the background of Fuentes, he adds that Fuentes is every bit as anti-Semitic as “AOC, Rashida Tlaib, Ilhan Omar, and Louis Farrakhan are.”

For Trump to dine with Ye and Fuentes, he said, was just as bad as if he “broke bread with Ilhan Omar, the leaders of BLM, or Linda Sarsour, or any leftwing Jew hater.”

Then he flashed a Newsweek headline from 2020 that read: Why Won’t Joe Biden Repudiate Anti-Semitic Democrats?, the piece written by Bruce Abramson and Jeff Ballabon.

Next he screened a panoply of Democrats who had either made anti-Semitic remarks over the years or refused to condemn those that did. The list:  Joe Biden, Kamala Harris, Linda Sarsour, Tamika Mallory, (the latter two featured speakers at a Democratic National Convention, with Sarsour being a former executive director of the Arab American Association of New York and Mallory a social justice activist), Louis Farrakhan, New Jersey Senator Cory Booker, Minnesota Attorney General Keith Ellison, Democrat Reps. Maxine Waters, Barbara Lee, James Clyburn, (the latter the Democrat House Majority Whip who said that anti-Semitism was acceptable when it came from “women of color”), Alexandria Ocasio-Cortez, Rashida Tlaib, and neo-Nazi activist Richard Spencer, the latter who endorsed Biden for president. He noted that no less than ex-KKK head David Duke had praised Omar for her anti-Semitism.

All of these people, Salcedo points out, are either “pushers” of anti-Semitism or have refused to condemn those that are, yet they have escaped the kind of intense, repeated scrutiny Trump has faced over the last week.

He noted that famed lawyer and pro-Israel activist Alan Dershowitz had been on his program and expressed alarm at the rise of anti-Semitism in the Democratic Party.

“Yet the biased press suppresses that condemnation and coverage of Democrat hate.” He adds that MSNBC only condemns anti-Semitism when it benefits their left-wing politics. Then, as a Wallace guest cited conservative Ben Shapiro (an admitted rarity on MSNBC!) for saying the best way to avoid having dinner with an anti-Semite you don’t know is not to have dinner with an anti-Semite you do know, Chris noted that Wallace couldn’t bring herself to mention Shapiro’s name. Wow, said Chris. “That’s the level of respect” Wallace has for a Jew who is…conservative.

The bottom line here is that Chris Salcedo nailed it exactly in this segment. The left-wing media will drill in on anti-Semitism as long as they can attack Trump. The very same Trump who has a Jewish daughter, son-in-law, and grandchildren, successfully negotiated the Abraham Accords, became the first president to visit the “Wailing Wall” in Jerusalem and moved the US Embassy to Jerusalem. In fact, Trump is so popular in Israel that he has had a train station in Jerusalem named for him.

But when it comes to serious and similar intense media coverage of blatantly anti-Semitic Democrats or left-wing activists there is no such coverage. It doesn’t exist.

Not good at all.

Leftist ‘Star Wars’ actor issues explanation on why he ‘liked’ J.K. Rowling’s response to a transgender critic
Louisiana trucker suing city over ordinance preventing him from flying flags with vulgar message against Biden and his supporters
TWITTER FILES: Pro-Censorship Twitter Regime Lacked Guts to Out Group Behind ‘Russian Bots’ ‘Lie’
Cramer’s lighting round: Teck Resources is a buy
Alliance of Big Tech, Dark Money Groups Partners With Counties in State That Bans ‘Zuckerbucks’ for Elections