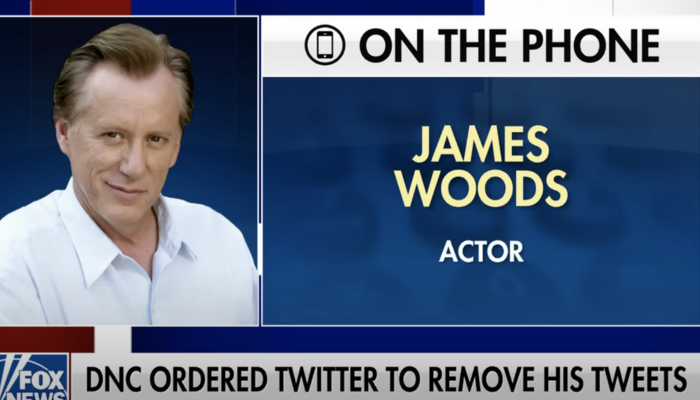 Actor James Woods says he is suing Twitter after information regarding the company’s censorship of his account was revealed.

Internal Twitter documents released by Elon Musk revealed that the Democratic National Committee (DNC) ordered Twitter to remove his tweets for speaking out on the 2020 Hunter Biden laptop scandal.

“I can guarantee you one thing more than anything else you’ll ever hear in your life: I will be getting a lawyer. I will be suing the Democratic National Committee no matter what,” he said.

He added that cancel culture ruined his career and he does not care whether he wins or loses.

“Whether I win or lose, I am going to stand up for the rights that every American – not a so-called celebrity. I’m not a celebrity — I’m hardly recognizable anymore because my career has been destroyed by these very people.

“And I will sue. And I’m hoping other people will sue. And if it turns out there are a lot of us on this list where the DNC targeted us, then I will quote the immortal words of Joseph Welch when he attacked [Wisconsin Senator] Joseph McCarthy for the enemies list he had – ‘At long last or have you no shame?’’

He considers it as a compliment that the Democratic Party chose to go after him personally, but he laments the loss of his career.

“I think it is a compliment, but, it’s a big price to pay. It’s not a lot of fun. I loved my career for 50 years. I was happy to be an award-winning and honored and appreciated actor, and I miss my career,” he said.

“Thank you, @elonmusk, for giving back to all Americans, and voices around the world, the most precious of gifts – free and open speech” he tweeted. “I admire you and I salute you, sir.”

Irene Cara’s cause of death has been revealed
Biden Dodges Blame For Inflation: ‘It Was There When I Got Here, Man’
Are Most Americans Too Stupid To Participate in a Democracy?
Beyond the ‘balloon watch’ gimmicks this is an extremely serious moment
Teen girl killed in suspected shark attack while swimming with dolphins