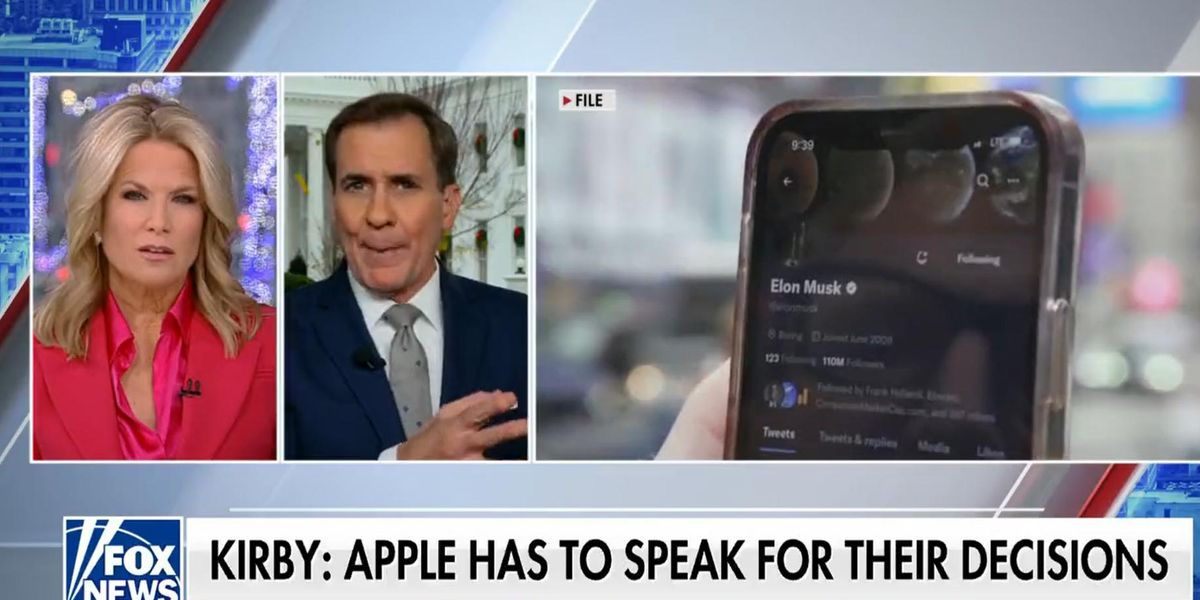 White House press secretary Karine Jean-Pierre said earlier this week that the Biden administration is “keeping a close eye” on Twitter now that its new owner is permitting a freer flow of information on the platform. On Wednesday, Fox News’ Marsha MacCallum pressed another Biden spokesman on whether Apple has attracted similar ire from the White House after having once again helped a genocidal regime restrict the speech of Chinese dissidents.

In an interview with Ret. Adm. John Kirby, the National Security Council’s coordinator for strategic communications, MacCallum raised the matter of a potential double standard regarding the White House’s approach to Elon Musk’s Twitter versus its deferential treatment of Apple.

MacCallum asked why the White House would be “keeping a close eye on Elon Musk and Twitter” but then “not call Apple out for helping the Chinese government to suppress their own people’s ability to communicate?”

Kirby said, “Apple is a private company. They have to make decisions, and they have to speak for those decisions. But here at the White House, here in the administration, we want to see that individual citizens, whether they’re protesting or not … are able to communicate freely and openly.”

The Fox News host seized upon this inconsistency, saying, “Twitter is a private company too. So why is Twitter getting one treatment [and] Apple’s getting another?”

The Biden spokesman appeared to flounder, claiming that they were “completely two different circumstances.”

“You’re talking about the potential for … foreign investment and involvement in the management of Twitter. That’s a different issue than what we’re talking about here, which is a business decision by Apple with respect to how one of their applications is being utilized,” said Kirby.

The so-called “business decision” Apple made ensured that peaceful critics of the Chinese Communist Party could not communicate with one another or circumvent the regime’s communication controls.

MacCallum noted that when it comes to foreign influence, China’s fingerprints are all over Apple.

“They’ve changed policies specifically for China when it comes to what they put on their phones. That seems like something that the White House ought to be able to keep an eye on,” said MacCallum.

The Citizen Lab at the Munk School of Global Affairs and Public Policy issued a report last year that underscored that Apple has long censored on behalf of the CCP, not just in China but in Taiwan as well.

With Kirby ostensibly stunned, MacCallum hit him further off balance with a heavy question, asking whether the White House had reached out to Apple “as a matter of national security, since we obviously have national security concerns with China, who they seem to be aiding in this process.”

While noting that Apple “should have to answer for that,” Kirby noted that he was not aware of any conversations with Apple executives about their hand in silencing Chinese dissidents.

The White House’s announcement that it is monitoring Twitter came amid suggestions by Elon Musk that Twitter has interfered in elections.