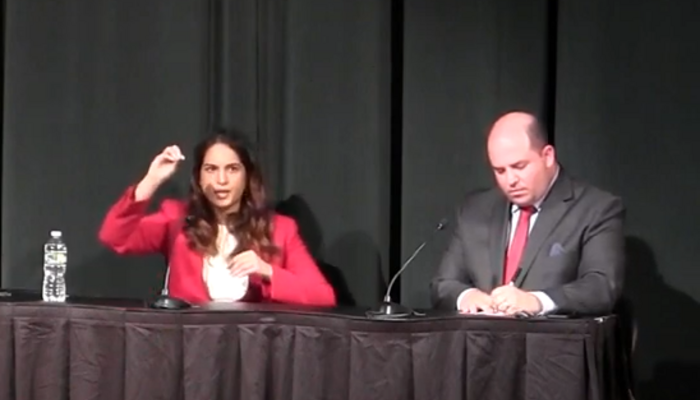 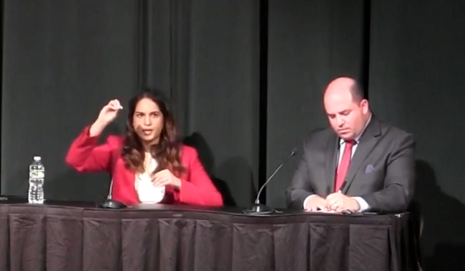 For a definition of what “far left” is, you could suggest that someone who sounds extreme sitting next to former CNN media reporter Brian Stelter. Check out left-wing extremist Nandini Jammi, whose “Check My Ads” racket seeks to separate all advertiser money from Fox News, Breitbart, and other conservative media outlets.

Jammi (on Twitter at “Nandoodles”) hated this “unhelpful framing.” She defines advertising anywhere on the right — the entire right — as equivalent to funding hate, bigotry, and violence.

NANDINI JAMMI: I don’t like to think about the internet in terms of right-wing and left-wing. I think that’s not, like, a helpful framing, in my opinion…We use very specific language even at Check My Ads. We say, you know, advertisers should not be – it’s our value position that they should not be advertising on obviously not violence and so on, on hate, harassment, bigotry. We even try to helpfully frame it as like, what is the real-world outcome of the content you’re supporting? And advertisers, when we consulted with advertisers, this was a much more helpful framing for them.

JAMMI:  I just want to point out that there’s a universe of products and tools and frameworks that advertisers currently rely on, that there’s for example, there’s something called Ad Fontes Media. It’s some kind of a bias chart, with like right vs. left, with reliability as the Y axis, those are frameworks advertisers currently look it up on your phone, you can Google it, it’s a nonsense chart of like left, right. There’s like Washington Post up here, and maybe a little bit to the, like, left is maybe, or in between the right is CNN, and and then there’s like InfoWars down here, and like, what is the point of this freaking chart? What are you supposed to take away from it? They do sell it to advertisers, and advertisers are like, ‘ok, so how are we, like how are we going to stay balanced and objective, and do both sides and respect both sides? When the truth of the matter is like, a lot of this content, unfortunately, on the right side is just toxic in terms of the definition of hate and harmful content and in terms of real-world violence.

So we have to move away from right vs. left. I don’t think that even exists anymore. I don’t know what that means, and move towards a set of values that we can define and agree on, ‘cause what we’re dealing with is real-world outcomes. What you’ve shared with us so far, your stories, are about real-world outcomes.

We need to optimize for the kind of world that we want to, or country that we want to live in. That is something every advertiser needs to be doing, that’s what all of us need to be working towards, defining as journalists.

Stelter is drumming his fingers on the table at the sound of this, and then he accurately defines what she’s advocating: “But you’re viewed by the far right as a pressure campaign to censor and stop and shut them down, right, which is basically what you are.”

She looks shocked by this accurate definition, so Stelter added, “In other words, you’re part of the elite cabal. You’re part of the threat, what’s hurting Real America,” he said. “This is what we’re up against,” that “there’s a minority that feels loss of power and status, that feel like only outlets like Fox speak to their truth.”