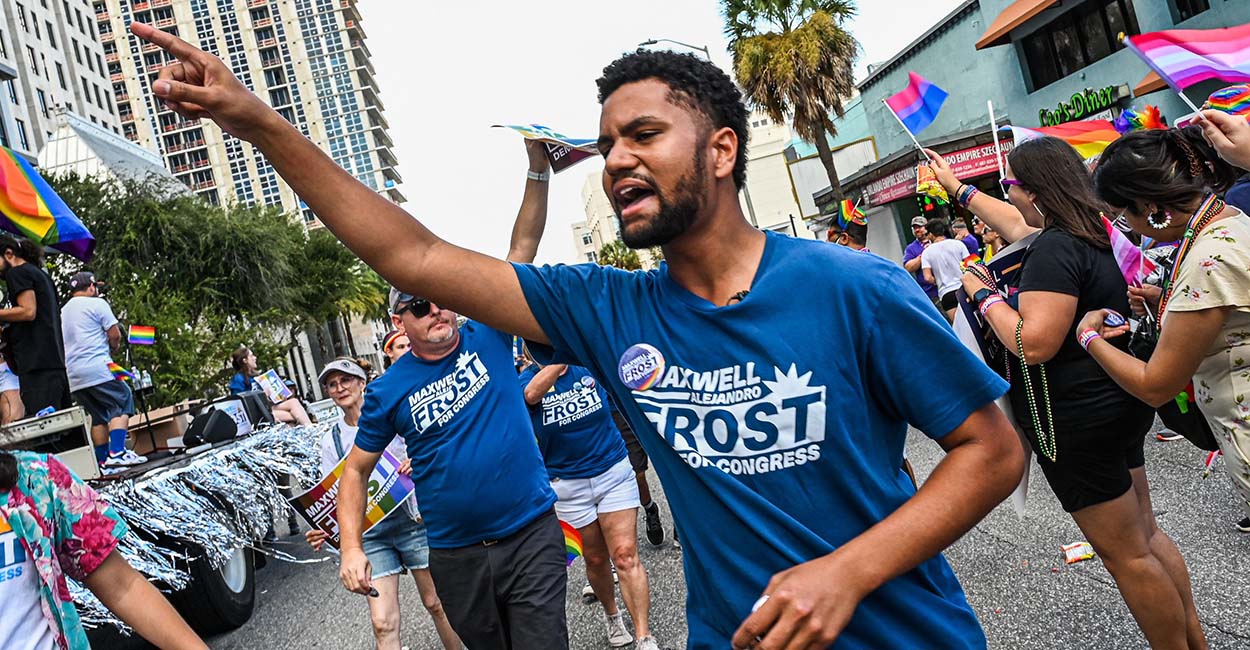 Mostly left-leaning donors bankrolled efforts in 2022 to turn out the youth vote, which early estimates show was the second-highest such turnout for a midterm election in the past three decades.

The investment in voting by younger Americans, which included money from organizations tied to Arabella Advisors, leftist financier George Soros, and eBay founder Pierre Omidyar, among others, may have paid off: The youth vote cut decisively for Democrats by about 28%, according to the Center for Information & Research on Civic Learning and Engagement at Tufts University, also known as CIRCLE.

The turnout among voters ages 18 to 29 was 27% of those voting in the 2022 midterm elections, slightly lagging their turnout in the 2018 midterms.

The clear partisan gap is a fairly recent phenomenon since the Tufts center’s research shows that in elections over the past 30 years, the Democrat advantage in the youth vote was more marginal and often aligned with the overall electorate, CIRCLE Director Kei Kawashima-Ginsberg told The Daily Signal

Still, young voters were the deciding factor for major battleground races in Pennsylvania, Michigan, Nevada, and Wisconsin, according to the All In Campus Democracy Challenge, which encouraged colleges and universities to lead voter registration drives.

“The research is clear: Colleges and universities that make intentional efforts to increase nonpartisan, democratic engagement have higher campus voter registration and voter turnout rates,” Jennifer Domagal-Goldman, executive director of the All In Campus Democracy Challenge, said Wednesday in a public statement.

“Despite ongoing obstacles, these campuses have remained dedicated in their commitment to ensuring that their students are informed and confident voters,” Domagal-Goldman said.

The All In Campus Challenge announced that 394 colleges and universities across 44 states and the District of Columbia were recognized as part of its first “Most Engaged Campuses for College Student Voting” recognition program.

In April, the U.S. Department of Education notified colleges and universities that they must “make a good faith effort to distribute voter registration forms to their students” if the schools wanted to  continue to receive federal student aid grants.

Funders for the All In project lean to the left, according to the Washington-based Capital Research Center.

The Andrew Goodman Foundation, a New Jersey organization  that advocates “social justice initiatives,” helped fund an All In project at Miami Dade College in Florida. The Goodman Foundation promoted its plan “to mobilize the youth vote in the 2022 midterm elections” in October as part of its Campaign to the Polls.

All In is an arm of the progressive group Civic Nation, and the listed media contact for the organization has an email address at Civic Nation. The organization did not respond to inquiries from The Daily Signal by publication time.

Civic Nation also runs other groups that include United State of Women and When We All Vote.

Among funders of Civic Nation are left-leaning grantmakers such as the Democracy Fund, established by eBay founder Pierre Omidyar; the Carnegie Corporation of New York, the Environmental Defense Fund, and the Joyce Foundation. The Joyce Foundation included Barack Obama on its board before he was president.

Although All In Campus Democracy Challenge focused on the college student vote, that’s just one portion of the youth vote, according to Tufts’ Center for Information & Research on Civic Learning and Engagement.

The CIRCLE website says millions of Americans ages 18 to 29 don’t attend college and many are married with families. It notes: “Narratives about youth—and particularly about young voters—often portray them as uniformly Democratic-leaning college students; that’s wrong on both counts.”

In seven of the last 12 presidential elections, young voters have either preferred the Republican candidate or favored the Democrat by less than 5 percentage points. Youth support for Democratic candidates has widened in recent years, but in 2016 [Donald] Trump still won or tied Hillary Clinton among young voters in states like Iowa, Kentucky, Missouri, South Carolina, Utah, and Indiana.

When it comes to outreach, a majority of young voters told the CIRCLE pollsters that neither party reached out to them for support, but a bigger majority said Republicans didn’t reach out.

Based on postelection polling from 2020 by CIRCLE, though, 52% of voters ages 18 to 29 said Democrats didn’t reach out to them for their support, while 69% said Republicans didn’t.

Rock the Vote is the longest-standing organization focused on turning out the youth vote. Founded ahead of the 1992 presidential election, Rock the Vote has asserted that it is nonpartisan.

In 2019, the organization advocated abolishing the Electoral College, which determines who wins the presidency based on who gets the most votes in what states.

After the 2016 presidential election, Rock the Vote President Carolyn DeWitt said voters faced “confusing election laws,” which led to Trump’s victory over Clinton. But DeWitt insisted that America is “moving steadily in a progressive direction.”

In 2009,  her organization advocated that Congress pass the legislation creating Obamacare.

A spokesperson for Rock the Vote didn’t respond to The Daily Signal’s inquiry for this report.

‘Machinery More Important Than Any Fraud’

It’s not clear that the youth vote was a deciding factor in the outcome of the 2022 midterm elections, said Scott Walter, president of Capital Research Center, a conservative nonprofit founded in 1984.

But there is a bigger picture to consider, he said.

“There is hardly anybody on our side who understands the huge machinery [to] turn out people and win elections,” Walter told The Daily Signal, adding:

The average angry right-winger just says they [Democrats] cheated. That’s hard to get evidence on. But for the sake of argument, presume there is not one single fraudulent ballot cast. The Left still has a huge institutional advantage. Machinery is more important than any fraud that takes place. It may enable fraud, but that misses the bigger point.

Key to turning out young people for Democrats is collecting data, Capital Research Center’s Walter said, which is where CIRCLE, the research institute based at Tufts University, comes in.

“These nonprofits—C3s, C4s—for elections they do what for-profit social media companies or what McDonald’s does or what car companies do,” Walter said. “These companies engage in massive data gathering to see what works. That’s what the Left does with elections.”

Kawashima-Ginsberg, CIRCLE’s director, told The Daily Signal that she wouldn’t characterize any funders of CIRCLE research as either Right or Left, based on her knowledge.

The organization’s website lists “funding partners” that include the New Venture Fund, a 501(c)(3) division of the Arabella Advisors network, which promotes liberal nonprofits. Arabella’s network spent $1.7 billion toward defeating Trump in 2020.

The Youth Engagement Fund is a separate funding partner, but also a project of the New Venture Fund.

Another donor to CIRCLE is the Alliance for Youth Organizing, a left-leaning group that advocates automatic voter registration, lowering the voting age to 16, restoring felon voting rights, and universal mail-in voting.

The Alliance for Youth Organizing primarily has been funded by the Soros-backed Open Society Foundations as well as the Rockefeller Family Fund. The alliance has been a partner with Generation Progress, the youth arm of the Center for American Progress and the Hillary Clinton-founded Onward Together.

Other CIRCLE funders for traditional left-leaning causes include the Democracy Fund, established by Omidyar; the Ford Foundation; the MacArthur Foundation; and the Hewlett Foundation.

Generally, CIRCLE’s Kawashima-Ginsberg said, funding partners sponsor specific research studies, including the impact of protests on general voter turnout, young poll workers, as well as the impact of media, social media, K-12 education, and economic factors on the size of the youth vote.