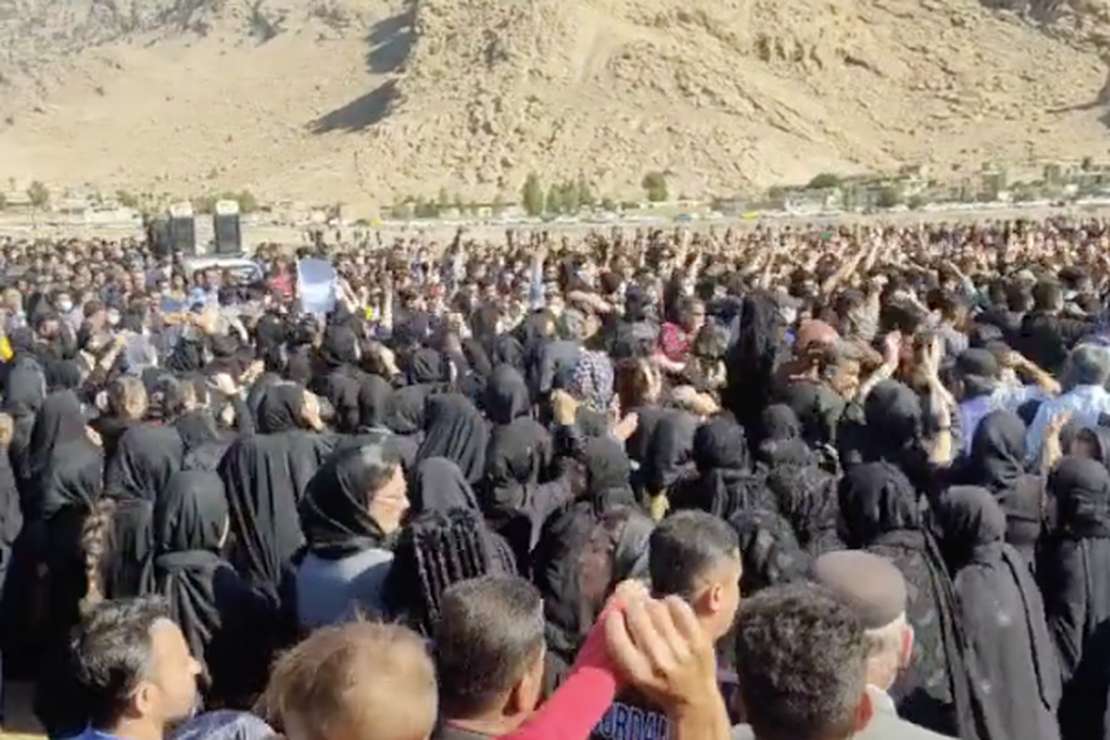 Iranian government forces used helicopters and armored vehicles as they swept through the Kurdish region, trying to stamp out a revolution against Tehran’s regime.

Protests in Iran against the government continue to grow in magnitude. Take a look:pic.twitter.com/yxxDZwtHy7

The number of dead and wounded is unknown. But the change in tactics suggests that the regime has decided to end the separatist threat in Kurdistan and in the southern Sistan-Baluchistan province, which has also been a hotbed of separatist sentiment.

In footage posted late Saturday by Tavaana and Hengaw, an Iranian Kurdish human-rights organization, the sounds of heavy weaponry can be heard. Tavana published pictures of ammunition it said can only be used with machine guns.

Hengaw said three protesters were killed during a separate operation earlier Saturday when government forces shelled Divandarreh, another town in Iranian Kurdistan, in response to protests.

It also said security forces shot Sunday at protesters who had gathered in Mahabad in front of a police station, and that security forces raided homes and detained locals in Bukan and deployed forces in Piranshahr.

This is where the revolution began. After the funeral for 22-year-old Masha Amini, who was beaten while in the custody of the Morality Police for not covering her head properly and later died, a massive protest erupted in the largely Kurdish city of Saqqez. Originally, the protest was against the strict female dress code represented by the hijab.

But as the protests spread across Iran, the Kurds decided it was time to reignite their fight for independence and began attacking symbols of Iranian sovereignty. And the protests grew even larger despite the authorities using live ammunition against unarmed demonstrators and throwing thousands of protesters in jail.

This latest effort to stop the revolution may be the most brutal yet.

In an unusual move, the operation involved the main security agencies—the police, the IRGC and the ministry of intelligence—according to media affiliated with security agencies and social-media accounts run by rights activists.

The armed forces were hunting Kurdish separatists who had come into conflict with a local pro-regime clan, outlets close to the IRGC said.

The IRGC took the rare step of deploying heavy weapons carried by its “ground forces,” a military branch of the organization created to quell insurrection at home. The IRGC’s ground forces are tied by an ideology that backs the Islamic Republic’s political system unlike the conventional army, called Artesh, which is seen as less loyal to the regime, according to people close to its security agencies.

Even if the army can’t be trusted — and there’s no evidence that might be the case — the fanatics in the Revolutionary Guard have taken an oath to protect the regime and Supreme Leader Khamenei with their lives. There will be no repeat of 1979 — at least it won’t happen anytime soon.

Another thing to consider is that the protesters are probably not as large a group as pro-regime sympathizers. It’s hard to win a revolution when half the country thinks you’re a terrorist.

Isfahan, Iran…
God forbid MSM shows these scenes, Ppl might see the Massive demonstration in support of Iranian gov’t & in honour of fallen security officers who were killed by the CIA backed rioters… pic.twitter.com/MQNxxi9q9p

But the change in tactics suggests more urgency from the leadership in trying to quash the revolt. They’re in far more danger from jealous, ambitious underlings looking for any excuse to move up than they are from a general uprising. But the longer it goes on, the more nervous the top leadership gets.

According to the Journal report, more troops and armored vehicles are moving into the area. There had not previously been such a strong show of force from the regime. But it shows the lengths to which the Iranian government will go to keep a lid on the protests.