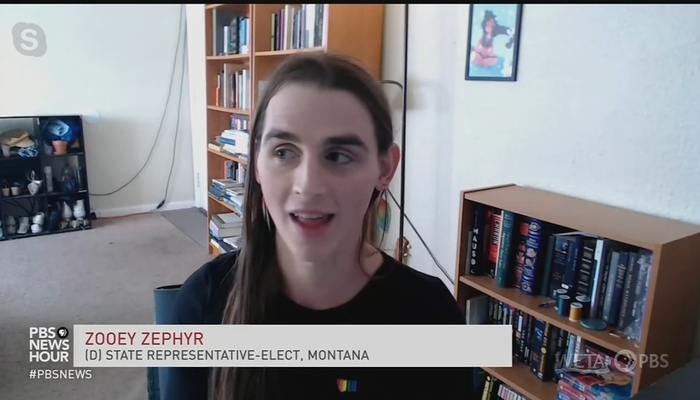 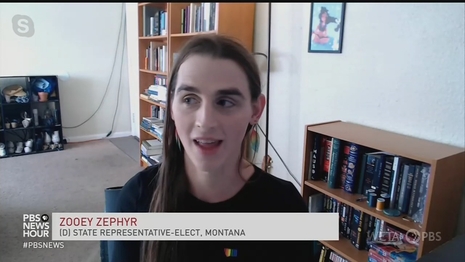 The leftists who make endless propaganda with our tax money have laid out a plush red carpet for newly elected bisexual transgender radicals in state legislatures. On Thursday, NPR’s All Things Considered typically failed to consult an opposing point of view in a tenderly promotional eight-minute interview with Zooey Zephyr of Montana and James Roesener of New Hampshire.

CHANG: Well, let me ask you because, you know, right-wing politicians and even some in the mainstream GOP have been targeting trans people. Like, the newly reelected governor in Iowa, Kim Reynolds, she ran a campaign ad this cycle saying that Iowans know the difference between boys from girls. [Horrors!] What do you make of the fact that this kind of rhetoric has been so prevalent from Republican politicians, people who will very likely become some of your colleagues?

ZEPHYR: The first thing I think of is the direct impact it has on trans people and those who love them. When Montana passed its anti-trans legislation, I had friends leave the state. I had friends end their lives. And that is the immediate impact of these types of bills.

They always stoop to arguing for an end to any opposition, claiming “you’re killing us!” Chang could only pose the conservative view as cruel, and no rebuttal was considered.

This was a question: “Well, despite there being a fair amount of legislation out there that you find deeply hurtful, deeply disturbing, there has been a record number of LGBTQ candidates running for office during these midterms. And I just want to know, what does that signal to both of you?” Roesener boasted that after “all of this homophobic and transphobic and bigoted rhetoric that’s been flowing in our system for, you know, a little bit now, we are taking our power back.”

Roesener’s number-one issue is abortion on demand, since there’s that fear of becoming a “pregnant person.”

This one-sided claptrap also happened on the PBS NewsHour on November 11. Laura Barron Lopez mangled plain English by claiming Montana had “a bill that blocked trans girls and women from playing in sports.” She lamented there are “already some pre-filed anti-trans bills, one in particular that would restrict transgender surgery on minors.”

“Hate can only stoke fear for so long….And if the right continues to push these kinds of anti-LGBTQ attacks—like those we’re seeing pre-filed in ’22—they’re going to continue to lose….And when we get to the legislature, we will to fight like hell to make sure they know that.” pic.twitter.com/AzokqPjpvG

Blatantly one-sided segments like these are brought to you by….you, the American taxpayers.

Sunlight is the Best Disinfectant
Jean-Pierre calls ‘Twitter files’ revelations about censorship of Hunter Biden laptop story a ‘distraction that is full of old news’
Texas girl, 7, who went missing is found dead; FedEx driver arrested for murder, kidnapping
Trump firm guilty of defrauding tax authorities for more than 15 years
Ron DeSantis has a new book coming out in early 2023