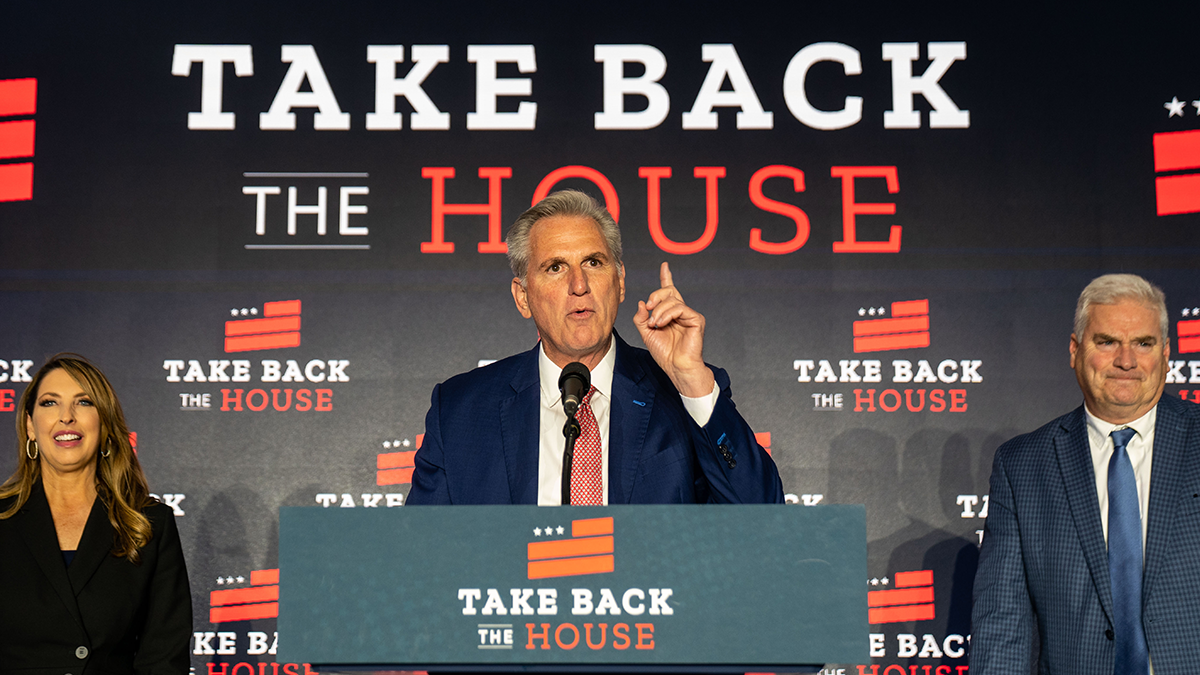 Republican lawmakers in the U.S. House of Representatives are set to hold leadership elections Tuesday, despite conservative leaders calling for a delay in the elections given how many House races remain undecided.

Here are four positions members will vote on as they prepare for the next Congress.

1. Speaker of the House

Rep. Kevin McCarthy, R-Calif., will face a challenger from the House Freedom Caucus for the speaker of the House position, likely Rep. Andy Biggs, R-Ariz., though it has not been confirmed, The Daily Signal previously reported.

McCarthy currently serves as the House minority leader while Biggs served as the House Freedom Caucus‘ chairman, the most conservative caucus, from 2019 to 2021.

According to the U.S. House of Representatives website, “the speaker acts as leader of the House and combines several institutional and administrative roles.”

Whoever holds the role, currently held by Rep. Nancy Pelosi, D-Calif., is also second in line for the presidency behind Vice President Kamala Harris.

“The Speaker recognizes Members to speak on the House Floor or make motions during Floor proceedings. The Speaker makes many important rulings and decisions in the House,” Ballotpedia says.

“The Speaker may debate or vote, but typically only occasionally does so. The Speaker also serves as an ex officio member of the Permanent Select Committee on Intelligence,” according to Ballotpedia.

Rep. Steve Scalise, R-La., is running unopposed to be the next House majority leader, a decision he announced on the Wednesday after Election Day.

“The American people deserve a House of Representatives that can move the agenda that was promised to them on the campaign trail,” Scalise wrote in a letter sent to fellow Republicans last week.

“As your Majority Leader, I will work relentlessly to usher our vision through the House and show the country how conservative ideas can solve the problems that families are facing,” Scalise said.

Scalise currently holds the position of Republican whip, a spot he has held for nearly 10 years.

“This officer is charged with scheduling legislation for floor consideration; planning the daily, weekly, and annual legislative agendas; consulting with Members to gauge party sentiment; and, generally working to advance the goals of the majority party,” the History, Art, and Archives for the U.S. House of Representatives website says.

“Whips assist leadership in managing their party’s legislative program on the House floor,” according to the U.S. House of Representatives website.

Emmer is the National Republican Congressional Committee chairman, a spot he was reelected to in 2020, and is on the House Committee on Financial Services, according to his website.

Ferguson is on the Committee on Ways and Means and serves on the Taiwan Caucus, the Border Security Caucus, and the House Army Caucus, among others, according to his website.

Reps. Elise Stefanik, R-N.Y., and Byron Donalds, R-Fla., are running to be the House Conference chair.

Stefanik is the chairwoman of the House Republican Conference, a position she was elected to in May 2021 to replace Rep. Liz Cheney, R-Wyo.

“Today, I humbly ask to earn your vote for House Republican Conference Chair to keep our message unified and to build on the hard work and success we have accomplished together as we work to legislate and accomplish our Commitment to America,” the No. 3 Republican said in a letter for GOP colleagues, Townhall reported last week.

Donalds officially launched his bid for the position on Thursday, the Daily Caller reported.

“Over the past two years, it’s been abundantly clear that families across the nation are dissatisfied with the political climate and are desperate for change. Our party has the chance to answer this call, which is why I humbly ask for your support as I endeavor to become Chair of the House GOP Conference,” Donalds said in a letter to fellow House Republicans.

“The House Republican Conference Chairman presides over conference meetings, which are composed of all members of the Republican party,” the History, Art, and Archives for the U.S. House of Representatives website says.

“The House Republican Conference serves as the organizational forum to elect party leaders at the outset of each new Congress. The conference meets on a weekly basis to discuss party policy, pending legislative issues, and other matters of mutual concern,” the website also says.