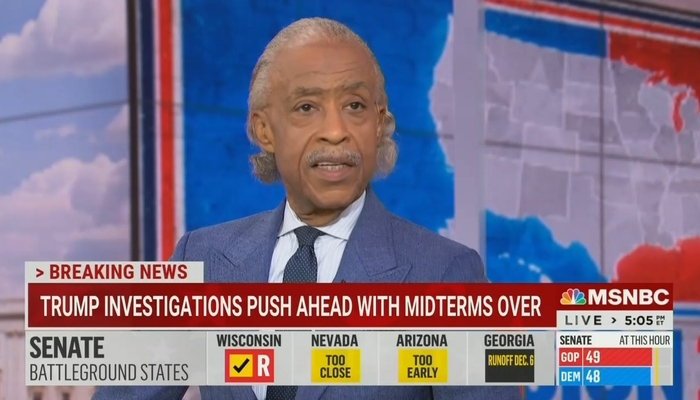 On Friday’s Deadline: White House, MSNBC host Al Sharpton predicted Donald Trump is toast and he knows it, that he’ll take an “exit ramp” and ultimately not run in 2024. Then, like most liberals this week, he suggested Gov. Ron DeSantis was worse.

Wallace began by asking for a preview of how the media will try and cover Trump for President 2024: “Viewers of this program know you all have some version of history with Donald Trump, and I really want this conversation to land on what we should do and how we should cover another run for president from him.”

If we know the way liberals think, Wallace’s audience is thinking if Trump isn’t put in jail, the media have failed to cover him negatively enough.

AL SHARPTON, MSNBC HOST: I think that Donald Trump, in the end, will probably not run. I think that he’s going to announce. I think it probably is the worst nightmare for DeSantis to be getting this kind of attention, for people to say he’s in the rearview. So, his ego is challenged. But I think at the end of the day, he does not want to be beaten as badly as he would probably be beaten if he were to run. So, I think he’s going to go through all the motions and find an exit ramp if he can.

I also think that Democrats and independents are not deceived. DeSantis`s politics is not much better than Trump’s.

SHARPTON: So even in all of our dislike of the personality of Trump, let’s not feel that DeSantis is an alternative. policy-wise or legislative-wise. This is the guy banning books and anti-critical race theory when there is none, and anti-LGBTQ. So, DeSantis —

WALLACE: Anti-Disney, and masks, too.

SHARPTON: Anti-Disney. So, let’s not act like DeSantis is an alternative. He’s just a younger, more savvy, polished version of an old man who doesn’t know that the people have left the theater. He’s still onstage singing and there’s nobody in the audience. Even the lady that sells the popcorn has gone home, Donald. There’s no one in the theater but you.

Trump could obviously ask Sharpton if people have “left the theater” when Sharpton’s show comes on MSNBC. Who is he to suggest someone else is an old man still putting out a product not too many people want?

Wallace then interjected: “I don’t think he’s singing. He`s just shouting like a crazy person. What do you think?” Former Trump attorney and fixer Michael Cohen just said “I mean, how do you argue with the Rev?…I don’t!”