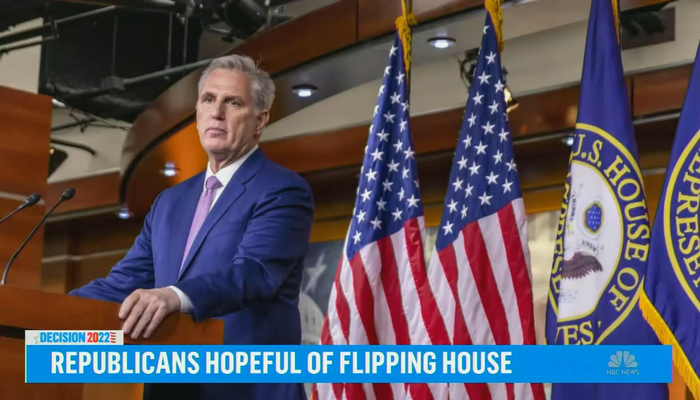 With Republicans currently (noon on Saturday) forecast to win a slim majority of about 220 seats in the House of Representatives (+/-7), GOP Leader Kevin McCarthy is the odds-on favorite to be the next Speaker of the House. But unlike the overwhelmingly favorable coverage that Democrat Nancy Pelosi enjoyed in 2006 as incoming Speaker in that election year, the liberal media have been mauling McCarthy — and the GOP caucus he leads — with savage attacks for the past two years.

“He has been a torrent of disinformation,” the Washington Post’s Dana Milbank slammed back in April. Erstwhile Republican-turned-MSNBC favorite Steve Schmidt was even more extreme back in January, calling McCarthy “among the most villainous figures that have been in the history of the American Republic.”

In October, the New York Times gave its seal of approval to Pelosi’s sneering comments about her likely successor. Reporter Annie Karni ruled that McCarthy “has given Ms. Pelosi plenty of fodder for ridicule and ill will….Pelosi, who colleagues say abhors spinelessness and stupidity, has accused him of acting like a buffoon.”

Sixteen years ago, as Pelosi’s Speakership loomed, she was portrayed as “ambitious and effective,” not a “villainous” liar. And the liberal media thrilled over the trailblazing history she would make. “It’s going to be an amazing moment” to see Pelosi sitting behind the President at the State of the Union address, MSNBC’s Chris Matthews marveled on election night 2006.

“History was riding along with you as you watched the results last night,” NBC’s Brian Williams oozed to Pelosi the next day on Nightly News.

Here’s a sampling of what the media has said about Kevin McCarthy in the past two years:

■ “I find it amazing that Kevin McCarthy talked about a president can’t govern if they don’t have the faith, trust, and confidence of the American people. He served a president for four years that never, not even one day, had the faith, confidence, and trust of the majority of the American public.”
— Former ABC and CNN pundit Matthew Dowd on MSNBC’s The 11th Hour, August 27, 2021, taking exception to McCarthy’s criticism of Biden’s disastrous withdrawal from Afghanistan.

■ “What is the Republican party? It’s now its basest part of its base, and the basest part of its base is animated by hate….If you’re Kevin McCarthy, you start denouncing hate, where are you going to stop? Because once you start to denounce this kind of hate, and you take a stand, you now — you’re now surrounded by all kinds of hate, and the only thing that runs the GOP is hate. It’s now a big giant hate machine….That’s all it is — a big, ugly hate machine.”
— MSNBC national affairs analyst John Heilemann on MSNBC’s Deadline: White House, May 24, 2021.

■ “Sam Rayburn, the legendary House speaker of the mid-20th century known for his integrity, famously said that ‘any fellow who will cheat for you will cheat against you.’ McCarthy is the sort of man Rayburn warned of. He has been a torrent of disinformation….In the caucus he leads, such deceit is standard.”
— Washington Post writer Dana Milbank, April 25, 2022.

■ “What Kevin McCarthy has become is this villanious figure that is among the most villainous figures that have been in the history of the American Republic. He has played a — a profoundly important role over this last year through the lying, through the cover-up, of poisoning faith and belief in democracy….The House should use every power that it has at its discretion, including an inherent contempt power, that could see the Sergeant-at-Arms handcuff and detain Kevin McCarthy in a locked basement office until he wishes to testify.”
— Longtime MSNBC favorite Steve Schmidt, a onetime Republican strategist, on Deadline: White House, January 14, 2022.

■ Host Chuck Todd: “When he [McCarthy] lost the speakership the first time it reminds me, it looks like he’s made the same decision George Wallace made when he didn’t win his first Democratic Primary for governor at Alabama to Big Jim Folsom — and if you don’t  know the story, I just tell people go find out the story — McCarthy was never going to get out Freedom Caucus-ed again.
Former RNC Chairman Michael Steele: “I think that winning the majority is about keeping all the frogs in the wheelbarrow and some of the frogs have gotten pretty ugly, but you still need them in the wheelbarrow, at least until Election Day.”
— Exchange on MTP Daily, November 18, 2021.

■ “The relationship between Speaker Nancy Pelosi and the man who is most likely to succeed her should Republicans win control of the House in next month’s elections is barely civil…. [McCarthy] has given Ms. Pelosi plenty of fodder for ridicule and ill will….Pelosi, who colleagues say abhors spinelessness and stupidity, has accused him of acting like a buffoon.”
— New York Times reporter Annie Karni in an October 8, 2022 article.

Now, compare with some quotes about Nancy Pelosi around the 2006 midterm elections, which gave Democrats a House majority and made Pelosi the new Speaker. ■ Lesley Stahl: “With just 16 days to the election….Nancy Pelosi, who already made history once when she became Minority Leader, thinks she’s about to do it again.”
Rep. Nancy Pelosi: “First of all, you have to understand, breaking the — here we call it ‘the marble ceiling.’ This makes glass look like nothing. This is a marble ceiling.”
Stahl: “And breaking it, she says, would help all women.”
— From a 60 Minutes profile of Pelosi, October 22, 2006.

■ “She often introduces herself as a mother and grandmother, and is known for her trademark smile. But don’t be fooled. At 66, she is ambitious, effective, and has made an art form of staying on message.”
— NBC reporter Jamie Gangel profiling Pelosi on NBC’s Today, October 20, 2006.

■ “Pelosi’s blunt style is polarizing. But she’s used it to pull off something nobody thought was possible: Organizing the congressional Democrats. Under her leadership, they voted as a bloc against the Republicans almost 90 percent of the time….[to Pelosi] Do you let yourself think, for example, maybe before you go to sleep at night, ‘Speaker of the House Nancy Pelosi?’”
— ABC’s Claire Shipman on World News, October 26, 2006.

■ “I think it’s a great opportunity for her [Democrat Nancy Pelosi] and a great opportunity for women. I think one of the most stunning, most iconic pictures we’ll see on television in the next year is the State of the Union address, where you have Dick Cheney, who has got that sort of, you know, fire hydrant build sitting there with that very distinguished snarl of his, and then this incredibly interesting person next, a woman, first time ever sitting behind the President sharing power with the American government. It’s going to be an amazing moment.”
— MSNBC’s Chris Matthews on election night, Nov. 7, 2006.

■ Anchor Katie Couric: “You will be the first woman Speaker of the House and the highest ranking woman in the United States government. What does that mean to you?”
Nancy Pelosi: “It’s pretty exciting, I have to say. I’m just so excited that a Democrat will be Speaker of the House.”
Couric: “So you’re a Democrat first, a woman second?”
— Interview on the CBS Evening News, November 8, 2006.

If McCarthy does take over as Speaker in January, expect to hear more positive comments about the outgoing Pelosi, the liberal media darling who lost her majority, than about the new Speaker about to take the gavel.

For more examples from our flashback series, which we call The NewsBusters Time Machine, go here.