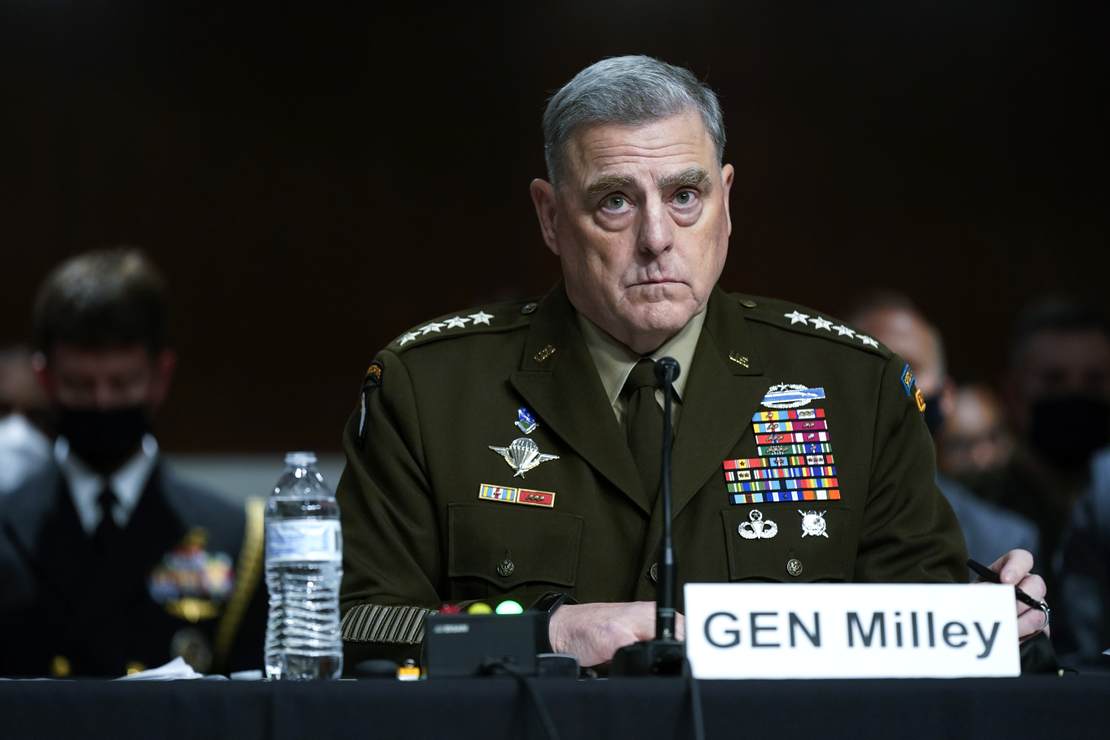 General Mark Milley, the chairman of the Joint Chiefs of Staff, has been urging the United States to press the Ukrainian government to begin negotiations with Russia to end the war.

Milley has made the case in internal meetings that “the Ukrainians have achieved about as much as they could reasonably expect on the battlefield before winter sets in and so they should try to cement their gains at the bargaining table,” according to the New York Times.

Milley is the highest-ranking military officer to urge such a course of action. To many other administration officials, it seems a bit premature for negotiations when neither side appears ready.

Milley went public with his peace advocacy on Wednesday; “Seize the moment,” he said in a speech in New York. On Thursday, he told CNBC, “We’ve seen the Ukrainian military fight the Russian military to a standstill. Now, what the future holds is not known with any degree of certainty, but we think there are some possibilities here for some diplomatic solutions.”

The White House continues to insist they will not put any pressure on Ukraine President Volodymyr Zelensky to cede any territory to Vladimir Putin. Indeed, Zelensky would see rewarding Putin for his invasion as a betrayal of his soldiers, who have fought so heroically to push back Russian forces.

But at some point, realpolitik must enter the discussion. Peace is far preferable to a situation where a nuclear-armed  Russia would be faced with a decision to use nukes or lose the war.

But Zelensky is right not to accept the immediate urgency for negotiations. And the Biden administration isn’t pushing him in that direction anyway.

“The United States is not pressuring Ukraine,” Jake Sullivan, the president’s national security adviser, told reporters on Thursday. “We’re not insisting on things with Ukraine. What we are doing is consulting as partners and showing our support not just through public statements or moral support but through the tangible, physical support of the kind of military assistance I mentioned before.”

Milley was not wrong in putting the germ of an idea for peace in the minds of Biden administration officials. The problem is that statements about Ukraine have been all over the map as the U.S. appears to be urging talks on one hand while denying it on the other.

Perhaps it would be best if they kept Mr. Biden away from a microphone.

The confusion was exacerbated by ambiguous comments by Mr. Biden at a news conference on Wednesday. Asked if he thought Ukraine now had the leverage it needed to begin negotiations, the president left the door open. “It remains to be seen whether or not there’ll be a judgment made as to whether or not Ukraine is prepared to compromise with Russia,” he said.

Pressed later about whether he was suggesting that Ukraine consider giving up some territory, Mr. Biden quickly said no. “That’s up to the Ukrainians. Nothing about Ukraine without Ukraine,” he said, repeating the official line that any resolution has to be determined by Kyiv, not the United States or Europe. “I do know one thing: We’re not going to tell them what they have to do.”

The war is doing a lot of damage to western economies. It has worsened supply chain problems. And it created a possible nightmare natural gas shortage that could result in Americans being literally left out in the cold this winter. Ending this war quickly is in the best interests of the United States, while prolonging it helps only Ukraine.

In addition to the ever-present threat of nuclear confrontation, there’s a legitimate question as to just how much more Ukraine can accomplish by fighting and at what cost. The Pentagon recently announced that Russia had lost 100,000 men killed and wounded while Ukraine has probably lost a similar number of soldiers. Needless to say, Russia is in far better shape to absorb losses like that than Ukraine.

Vladimir Putin is hoping the west gives in before his army gives out. Given what just happened in Kherson, that’s not likely.

Pentagon Is Sounding The Alarm On China’s Massive Nuclear Build-Out, But Experts Disagree About How To Respond
There’s No Excuse for GOP Supporting the Disrespect for Marriage Act
Hasbro defends Magic: The Gathering strategy, says ‘there is no evidence’ cards are overprinted
Prince of Wales announces winners of Earthshot Prize – here are the five who scooped £1m
CNN Host Laments HIV Patients Not Allowed to Donate Blood