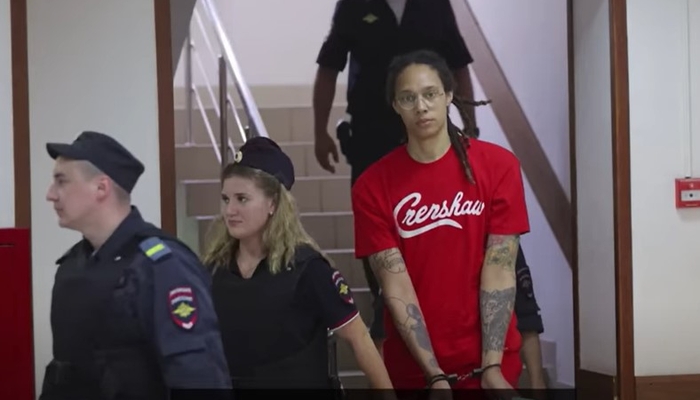 It just gets worse for woke WNBA all-star Brittney Griner. Imprisoned in Russia since February for drug smuggling, she’s now being transported to a dreaded penal colony, aka “forced labor camp,” with potentially hellish conditions. Someday, the anthem protester will return home to the United States and hopefully with a new appreciation for the country she loathed.

Griner was nabbed by Moscow police in February while trying to board a plane with vape cartridges containing cannabis. She was jailed, convicted, sentenced to nine years of prison and has exhausted her appeals. CNN reported this morning that “the process of taking a person to a penal colony is conducted in secrecy in Russia, with relatives and lawyers often unaware of where a prisoner is being sent for several days, according to Amnesty International.”

Russia has more than 800 penal colonies. Inmates live in barracks and are frequently (but not automatically) forced into labor, according to the Centre for Eastern Studies, in Poland. One would not wish this experience on your worst enemies. Many of the camps date back to the Soviet Union and are likened to Soviet-era gulags: “tough prison camps that expanded across the region during Joseph Stalin’s rule in the mid-20th century,” CNN reports.

Just transporting prisoners to the overcrowded camps is regarded as dangerous. Inmates are taken on long trips in cramped, windowless train cars. Once at the camp, torture and other forms of abuse are common, said a former labor camp inmate who was arrested for protesting. “From the first minutes you are here you are experiencing mental and moral pressure,” the man explained to CNN. Video cameras are placed “everywhere” to make sure prisoners obey the harsh rules.

Furthermore, the former inmate said prisoners are forced to be up from 6 a.m. to 10 p.m., are not allowed to sit down and cannot speak to other convicts. Nearly 60 men were cramped into a small sleeping area, on iron bunk beds. Prisoners sew police uniforms and garments. Eighty women shared a living area, with only three toilets.

The most frequent reason people are in the camps is due to murder convictions. It’s difficult to maintain good hygiene, epidemics regularly break out and AIDS is a major problem.

Neither Griner or her family will know the location of her camp, and there will be no communication between them.

The U.S. government has flailed and failed to gain a prisoner swap agreement with Russia to bring Griner home to the States.

That would be the home of the brave and the land of the free – where Griner was allowed to freely protest the U.S. flag and national anthem without fear of being jailed as a dissident. Which is the case with Russians who speak out against their government. Griner had the luxury of freedom in the USA, but she demanded the WNBA stop playing the Star-Spangled Banner prior to its games.

One can hope the conditions are not overly harsh for Griner, that she can stand up to the horrors of a labor camp … and that upon her return home someday she’ll fully appreciate how good she had it in America.