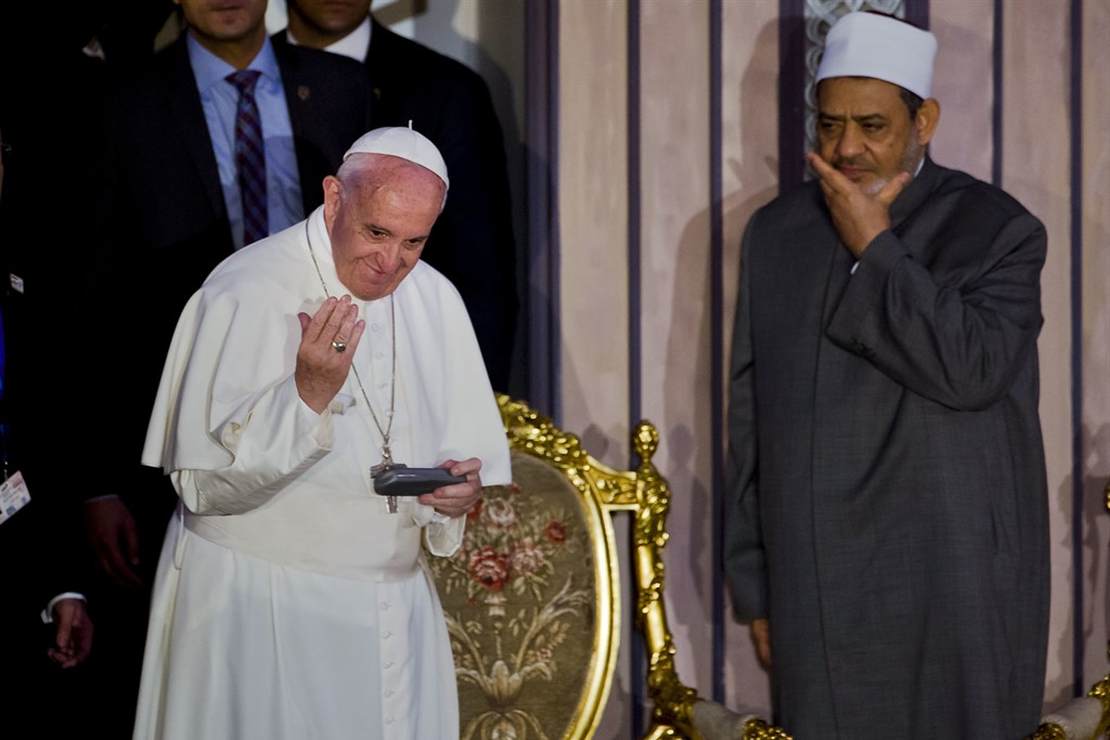 As I noted here Friday, a big interfaith dialogue session just took place in Bahrain, with Pope Francis, the Grand Imam of al-Azhar, Ahmed al-Tayyeb, and numerous other luminaries in happy attendance. Pope Francis seized the opportunity to demonstrate once again that his balloon never lands: he is as committed as he has ever been to denial and wishful thinking about the nature of jihad in Islam and its connection to the 42,428 violent jihad attacks we have seen worldwide since 9/11.

In an address to his “Dear Brother” al-Tayyeb and members of the Muslim Council of Elders, the pontiff began with “as-salamu alaikum,”  the Islamic greeting, “Peace be upon you.” He repeated it during the course of his remarks. This was emblematic of the willful ignorance and naivete of the entire “dialogue” enterprise. Francis doesn’t appear to have been aware that in Islamic law, only Muslims are permitted to use that greeting when greeting fellow Muslims. It means “Peace be upon you,” and to unbelievers, a Muslim is supposed to say “Peace be upon those who are rightly guided.” No doubt his hearers took it in the spirit in which it was intended, but it made it clear yet again that the pope who once declared that “authentic Islam and the proper reading of the Koran are opposed to every form of violence” is still as unacquainted with the facts as ever.

Francis also said, “I offer you cordial greetings and I express my prayerful hope that the peace of the Most High may descend upon each of you: upon you, who desire to foster reconciliation in order to avoid divisions and conflicts in Muslim communities; upon you, who see in extremism a danger that corrodes genuine religion; upon you, who are committed to dispelling erroneous interpretations that through violence misconstrue, exploit and do a disservice to religious belief.”

It would be refreshing if the Muslim Council of Elders actually bothered to explain how the interpretations of “extremists” are “erroneous,” so that their influence in Muslim communities could be combated. But they don’t do this, and the pope doesn’t seem to notice or care.

The pope added, “God is the source of peace. May he enable us to be channels of his peace everywhere! Here, in your presence, I wish to state once more that the God of peace never brings about war, never incites hatred, never supports violence. We, who believe in him, are called to promote peace with tools of peace, such as encounter, patient negotiations and dialogue, which is the oxygen of peaceful coexistence.”

That’s marvelous, but he was speaking to a group of people whose holy book directs believers to “kill them,” that is, unbelievers, “wherever you find them” (Qur’an 2:191, 4:89, cf. 9:5). It specifically directs Muslims to wage war against “the people of the book,” that is, Jews and Christians, until they submit to the overlordship of Muslims and accept the inferior status prescribed for them in Islamic law (Qur’an 9:29). The Qur’an also tells Muslims to fight non-Muslims “until religion is all for Allah” (8:39), and these are just a few of its numerous exhortations that contradict the pope’s assertions about the nature of God. Maybe every last Islamic scholar in the room rejects the literal understanding of those and other Qur’an passages, but there is no denying that all too many Muslims do not.

Nor is this just proof-texting that can be countered with similar verses from the Bible. Although all Muslims aren’t jihadis and most never will be, Islam is the only world religion with a doctrine mandating the conquest and subjugation of those outside the fold. Majid Khadduri was an Iraqi scholar of Islamic law of international renown. In his seminal 1955 book War and Peace in the Law of Islam, the Islamic scholar Majid Khadduri writes, “The Islamic state, whose principal function was to put God’s law into practice, sought to establish Islam as the dominant reigning ideology over the entire world. … The jihad was therefore employed as an instrument for both the universalization of religion and the establishment of an imperial world state.” Imran Ahsan Khan Nyazee, Assistant Professor on the Faculty of Shari’ah and Law of the International Islamic University in Islamabad, wrote in his 1994 book The Methodology of Ijtihad, “Muslim jurists agreed that the purpose of fighting with the People of the Book … is one of two things: it is either their conversion to Islam or the payment of jizyah,” a special tax demonstrating the unbelievers’ subservience.

The pope didn’t address the fact that such teachings exist. He simply ignored them and assumed that his Muslim audience agreed with his basic premises. Unfortunately, that cannot and should not be taken for granted. Assuming that all is well may feel quite satisfying, but it doesn’t actually solve any problems and shows up “interreligious dialogue” for the sham it is.