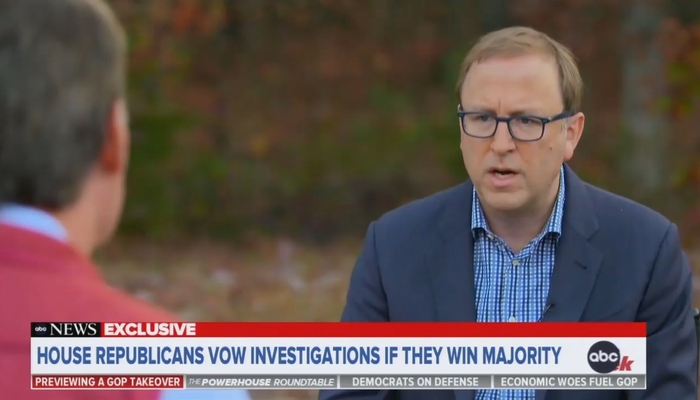 ABC’s Jonathan Karl pummeled Gov. Glenn Youngkin on Sunday with questions on This Week, signaling his loathing of Republican plans to hold oversight hearings into the Bidens and perhaps prepare impeachments for Biden or his cabinet secretaries. They spent all of 2022 adoring Democrat investigations, and now they flip-flop!

They find Trump oversight hearings to be the finest hearings imaginable, but they hated hearings into the Clintons, Obama, and now Biden. What a waste of time and treasure! And no one will cover it live with breathless anticipation.

NewsBusters evening-news and Sunday-show analyst Kevin Tober joins the conversation to run through some of the silliest Sunday moments. We were amused by NBC’s Hallie Jackson on Sunday Today trying to scare viewers about how Republicans made commercials where they handle guns….and ignored how Democrat Tim Ryan in Ohio posted video on Twitter featuring his shooting at targets for the cameras.

Meet the Press host Chuck Todd somehow thinks the experts all agree that to whip inflation now, we need to achieve amnesty for illegal immigrants. Plus why is Politico suddenly suggesting that the 2022 elections could be deeply flawed — after all the liberal boasting about how the 2020 election was the cleanest election imaginable, despite all the loosened rules due to COVID?

Kevin also provides an answer to which House race he’s most interested in on Election Night. Hint: The Republican contender is 25.

Fauci’s Quackery Was Exposed in Recent Deposition
Video: Coast Guard rescue of cruise passenger who fell overboard for up to 15 hours hailed as a ‘Thanksgiving miracle’
Woman abducted as a baby reunited with family 51 years later
Disney is the biggest winner — and loser — at the Thanksgiving box office
President Joe Biden’s Schedule for Friday, November 25, 2022