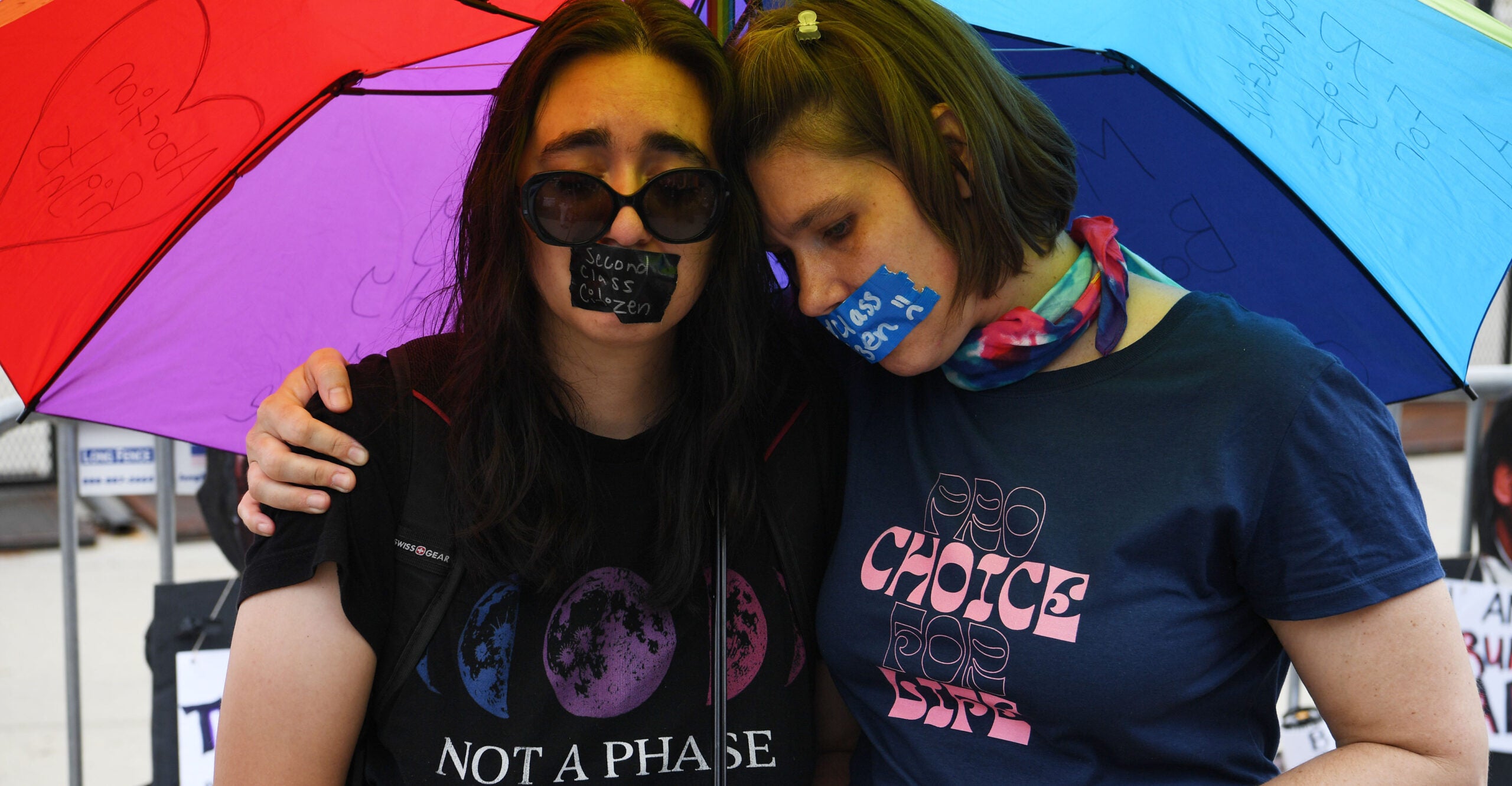 A protester arrested for disrupting Supreme Court oral arguments Wednesday leads one of the pro-abortion groups organizing protests outside the justices’ homes over the last six months.

“TONIGHT!! Join me in annoying the pants off the fascists!!” tweeted Nikki Enfield on June 1 as she urged pro-abortion activists to protest outside the homes of Supreme Court Justices Brett Kavanaugh and Samuel Alito. Her tweet, posted just a week before a man would attempt to assassinate Kavanaugh, included a Chevy Chase address meeting point close by to the justice’s home.

Enfield has said she is a leader of “Downright Impolite,” an activist group that has repeatedly marshaled and participated in illegal protesting outside the homes of the justices. Downright Impolite has also called for expanding the court, abolishing the police, and jailing Justice Clarence Thomas and his wife (“these two need to be Impeached and put in jail like yesterday,” the group posted of the Thomas duo in August).

Federal law prohibits picketing or parading near the home of a justice with the intent of “interfering with, obstructing, or impeding the administration of justice,” though President Joe Biden’s Justice Department has yet to enforce this law against the protesters. Both Maryland and Virginia law also prohibit picketing to disrupt or threaten to disrupt that individual’s “tranquility in his home.”

Enfield, who did not respond to requests for comment, has described herself as a “former Democratic operative” who spent a “decade working in political campaigns” before becoming a massage therapist.

Supreme Court public information officer Patricia McCabe said Enfield was arrested with two other activists on Wednesday morning and “charged with violation of Title 40 USC § 6134 (making ‘a harangue or oration, or utter[ing] loud, threatening, or abusive language in the Supreme Court Building’) as well as violating 18 USC § 1507 (demonstrating with the intent of interfering with the administration of justice or with the intent of influencing a judge in the discharge of his or her duty).”

The protesters were processed at the court and then transported to D.C. Metropolitan Police Department’s Central Cell Block.

“The right to choose will not be taken away,” one woman can be heard saying in the audio of the arguments.

In an Instagram post describing the arrests, Downright Impolite called those arrested “badass women” who “did a very cool and scary thing yesterday down at #scotus!”

“This photo was taken just after we were released from more than 30 hours in custody,” the group’s post said. “The three of us stood up inside the chamber and urged women to VOTE for pro-choice candidates in order to make the Dobbs decision irrelevant.”

“President Biden has vowed to codify the right to an abortion into law if the American people send a #democratic majority to Congress,” the group continued. “Frankly the thought of NOT doing this is too horrifying to ponder (as we’ve already started seeing in too many states), so just f—ing #vote already!!”

“I’m officially out of the clink!” Enfield posted on Twitter on Thursday. “Yesterday me and a couple badass women made some #goodtrouble down at #scotus to call attention to the fact that they may THINK they can strip us of our basic human rights, but we can still #vote to make their decision irrelevant!”

In response to the May leak of the draft opinion indicating that Roe v. Wade would soon be overturned, Downright Impolite has repeatedly urged protesters to gather in the neighborhoods of the justices to make “some Good Trouble,” promising that they are “not going down without a fight.”

The group has posted a GoFundMe and asked for financial contributions to its efforts, warning that it might need “some bail and legal support soon.”

In May, WUSA9 reported that Enfield joined protesters outside of Chief Justice John Roberts and Kavanaugh’s homes, where she told the outlet: “You don’t get to take away my bodily autonomy and get enjoy your Saturday at home. You can do one or the other.”

In July, DC News Now described her as the “facilitator of Downright Impolite” when she said of their protesting: “I think several is one or two people, the majority of the community has been very supportive of us. We have neighbors coming out and clapping for us. Every week, there’s more Chevy Chase for choice signs.”

Downright Impolite highlighted Fox News footage from June 8 indicating that the group was protesting outside of Kavanaugh’s house on June 8—mere hours after police arrested an armed man who said he had intended to kill the justice.

Downright Impolite’s sister organization is Our Rights DC, another group that has protested outside the justices’ homes for months. The two groups regularly coordinate protesting against the justices together and promote one another’s protesting content on social media.

The Daily Wire previously covered the antics of activist Sadie Kuhns, who has participated in dozens of protests outside the homes of the justices since May.

In one Instagram post by Downright Impolite, Kuhns can be seen depicted dancing as she leads a group of protesters to Alito’s home as she sings, “Hey Alito,” and the other protestors sing, “You’re a d—!”

“Stuff your rosaries and your weaponized prayer,” Ruth Sent Us said in a Twitter post after D.C.-area churches issued warnings about potential disruptions. “We will remain outraged after this weekend, so keep praying. We’ll be burning the Eucharist to show our disgust for the abuse Catholic Churches have condoned for centuries.”

Ruth Sent Us, which posted all the addresses of the conservative-leaning Supreme Court justices online, also published the daily schedule of Justice Amy Coney Barrett’s family as well as the name of the school that her children attend.

And when attempted assassin Nicholas Roske traveled across the country to the Kavanaugh family home to kill the justice, according to what he told officials, he found Kavanaugh’s address online. Ruth Sent Us would not address this at the time or take any responsibility, but the group put out a statement saying it does not “support violence.”

One of Kuhn’s May 2022 Twitter posts features a flier stating that Ruth Sent Us would reimburse those activists who traveled to protest outside the justices’ homes. Ruth Sent Us also said it would fund artwork to be used in its protests.

“Are you a muralist or chalk artist? Are you a graphic designer who would like to contribute remotely? Large-scale art will be included in the protests against the Supreme Court. Stipends available,” the group said on its website.

Far-Left Protesters Disrupt Pro-Life Banquet for DC Pregnancy Center Attacked by Vandals
Amid Rise in Number of Gender-Confused Children in Maryland Schools, Parents Need Bill of Rights
HERE WE GO: Los Angeles Mask Mandate Set to Return as Covid Cases Rise
Iran reportedly threatened families of World Cup players with torture and death if athletes protest again
Delta is making it harder to get into its airport lounges after they were flooded by travelers