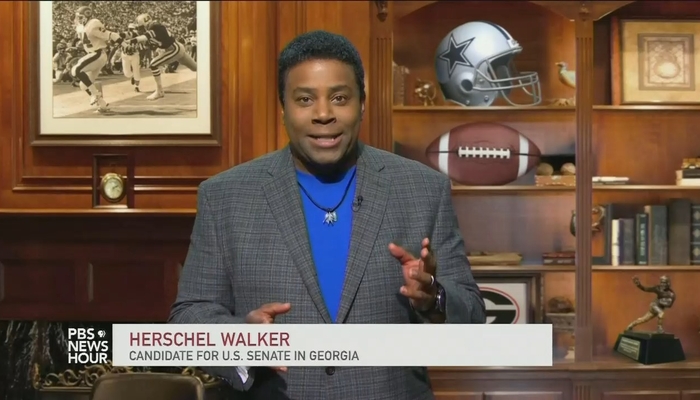 NBC’s Saturday Night Live is electioneering for the Democrats again, opening the October 29 show with a fake PBS NewsHour. That could be a rich target for satire, but they only think it can be mocked as news your grandma watches.

Introducing three Republicans who are running for office this November, fake Judy Woodruff began with Kenan Thompson, who played Herschel Walker, the Senate candidate from Georgia. “Hello, Judas,” he said. “My name is Herschel Walker, Texas Ranger, and I am running for president of the United Airlines.” If you’re laughing, you’re a Democrat.

Asked how he was just three points back, Thompson’s cartoon version of Walker replied, “The whole world is a mystery, ain’t it? For example, a Thermos. It keeps the hot things hot, but also the cold things cold. My question is: How do it decide? So we gonna be looking into that very much.”

The fake PBS anchor asked about Walker paying for abortions and holding a gun to his ex-wife’s head, and asked why he was doing so well: “Look, if you want to get on a Jumbotron at the Falcons game, you don’t throw on a cardigan and start making sense. You take your shirt off and shake your belly around. That’s what I’m doing, and people love me, no matter what. Like the great Trump Donald said, I could pay for an abortion in the middle of Fifth Avenue, and not lose any voters. And that’s a promise from me, Herschel Wickapotamus.”

Mikey Day played Dr. Mehmet Oz, the Republican Senate candidate in Pennsylvania, who Democrats routinely rip as a carpetbagger from New Jersey. Gosh, what a surprise, SNL Democrats did the same. “Hello, Judy! My Pennsylvania Phillies are in the World Series and I just had a delicious Philadelphia cheese and steak. Yum!”

Day added he was a long shot, but “I always told myself, you can win this election if you’re honest, if you’re fair, and if your opponent has a debilitating medical emergency. So we’re very lucky.”

Cecily Strong played Kari Lake, the Republican candidate for governor of Arizona. “Great to be with you, Judy, on your sweet little show full of lies,” she said. That’s a better description of Saturday Night Live days before an election.

Strong’s version of Kari Lake said “I’m normal, Judy, I’m just a regular hometown gal, constantly in soft focus and lit like a ’90s Cinemax soft-core,” like that can’t be described as sexist. “And frankly, I’ve just clicked with many of the wonderful, terrified elderly people here in Arizona, the Florida of the West. Also, I’m a fighter. In my life, I’ve sent back over 2,000 salads and I’m not afraid to do the same thing with democracy.”

Asked if she would implement electoral reforms if she won, Strong answered, “I’ll make it easy. If the people of Arizona elect me, I’ll make sure they never have to vote ever again. Look, nothing I say can be incendiary because I say it in TV voice. So jump on into Kari Lake, Arizona, because it’s placid and serene on top, but underneath, it’s a whole lot of giardia.”

John Fetterman only came up in the “Weekend Update” segment. Fake anchor Colin Jost suggested letting John Fetterman debate was a bad idea, but he suggested Dr. Oz is vicious with puppies. And again, they mocked Herschel Walker for paying for abortions.

Fake News on #SNL doubles down on Herschel and abortion, and then SORT of mocks Fetterman debating…but then back to Dr. Oz torturing puppies or something. pic.twitter.com/3lJZK4s3Sr