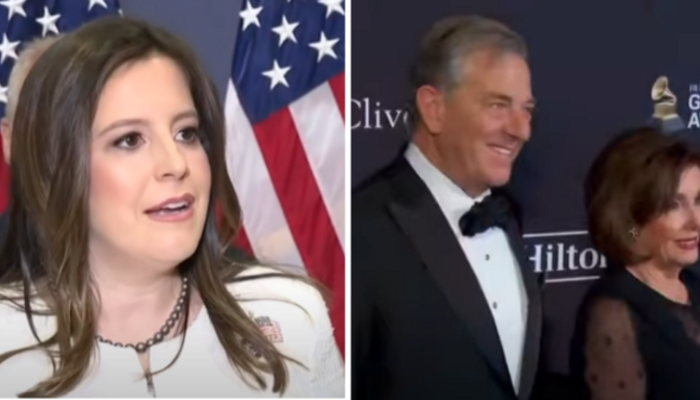 Leftist hacks at a National Public Radio affiliate spewed wild hyperbole at a GOP congresswoman by arbitrarily connecting her to the “nudist activist” who attacked House Speaker Nancy Pelosi’s husband. Congresswoman Elise Stefanik (R-NY) tweeted Oct. 28 following the attack on Paul Pelosi that she wished for “a full recovery” for him “from this absolutely horrific violent attack” in his home. Pelosi was reportedly taken to a hospital where he underwent surgery to repair a skull fracture following the incident. Stefanik said the suspect, identified as David DePape, “should be prosecuted to the fullest extent of the law.”

Wishing a full recovery for Paul from this absolutely horrific violent attack.

This criminal should be prosecuted to the fullest extent of the law. Grateful to law enforcement for their important work.

.@EliseStefanik @RepStefanik denounces violent political acts. But her day-to-day rhetoric may contribute to it. An important thread from @zdhirsch who’s reported on Stefanik all year for @ncpr 👇 https://t.co/jODAJ2RTa9

He continued: “To be clear, there is no evidence that Stefanik directly inspired this any other act of violence. The point is that political rhetoric has real-world consequences.”

After pontificating about the dangers of “political rhetoric,” Hirsch then did a 180-degree turn and smeared Stefanik by comparing her position on illegal immigration to the self-proclaimed white supremacist mass shooter suspect in Buffalo, New York: Payton Gendron.

Stefanik regularly blasts Nancy Pelosi with increasingly harsh and personal attacks. “There is a reason Nancy Pelosi is the most disliked elected official in America,” Stefanik said last year, before accusing Pelosi of a false, widely debunked conspiracy theory –

Of course, Hirsch conveniently left out the “context” that Stefanik was talking specifically about illegal immigration in those ads, not immigration writ-large: “‘[Democrats’] plan to grant amnesty to 11 MILLION illegal immigrants will overthrow our current electorate and create a permanent liberal majority in Washington,’” Stefanik’s ad said.

In the spring, a white gunman opened fire in a Buffalo supermarket, killing 10 Black people. Prior to the shooting, he appears to have written about that same theory. Stefanik denounced the violence, but then doubled down on the language in her campaign ads.

Newsflash Hirsch: Being against illegal immigration because it’s illegal has nothing to do with the “great replacement theory” or the reported white supremacist views of an alleged mass murderer.

In the spring, a white gunman opened fire in a Buffalo supermarket, killing 10 Black people. Prior to the shooting, he appears to have written about that same theory. Stefanik denounced the violence, but then doubled down on the language in her campaign ads.

Taxpayer funded NCPR – without a shred of evidence – disgracefully claims that Congresswoman Stefanik is responsible for the attack on Paul Pelosi just because she opposes Pelosi’s policies. They refuse to cover the violent leftist rhetoric which led to an assassination attempt on a Supreme Court Justice. This is deranged and dangerous, they should and will be defunded.

Conservatives are under attack. Contact your representative in Congress and the New York State Assembly and demand they #DefundNCPR.