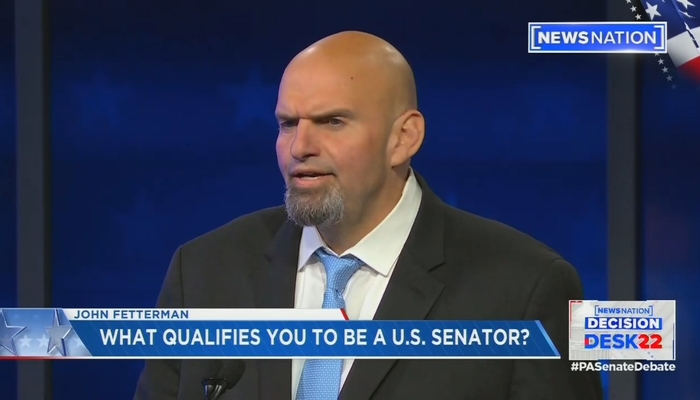 So the debate between the Pennsylvania Senate candidates, Democrat Lieutenant Governor John Fetterman and Republican Dr. Mehmet Oz has now been held.

With a zillion eyes in and out of Pennsylvania watching the televised showdown, here is a sampling of the headlines about the performance of the stroke-inflicted Democrat.

The New York Post’s John Podhoretz: John Fetterman debate was painful and shameful — he is physically incapable of being a senator

Fox News - Panicking’ Dems tell NBC they regret Fetterman agreeing to debate Oz: ‘Folks are pretty much freaking out’ (The subhead: “One Democrat strategist said ‘Anyone on his team who agreed to a debate should be fired, or never work again’”)

The Washington Post – Some Fetterman backers see a poor debate showing. But they are planning to stick by him.

And on and on go the revealing posts from various media outlets that, yes, in fact, the stroke-stricken Democratic nominee had a decidedly bad debate. And that bad debate was induced by the fact that Mr. Fetterman was still very much visibly suffering from the effects of a stroke, raising serious questions about his ability to even do the job were he elected.

So the media question now? Why did this come as such a shocking moment for the media?

The answer is clear — and not good. The reason for the collective shock at Fetterman’s performance – by “panicked Democrats” and others – is that once the fact of Fetterman’s stroke was known, the media tried to run cover on the subject of Fetterman’s real condition as a result.

No better example of that media cover-up is out there than this story about the attacks on NBC’s Dasha Burns after her remarks on interviewing Fetterman. Note this headline from Breitbart on the reaction by her own NBC network to her simply-the-facts remarks about what she experienced in her interview with Fetterman.

NBC News journalist Dasha Burns’s Tuesday report on Democrat Senate candidate John Fetterman’s use of closed captioning that aided his interview with Burns was immediately counteracted and framed as speculative by the network following the report’s debut on NBC News’s nightly evening news.

The scathing report by Burns, an employee of NBC News for over six years, went unsupported by her network after she conducted an interview with the Pennsylvania Democrat which highlighted Fetterman’s need for closed captioning to understand the questions Burns asked.

NBC journalist Dasha Burns was vilified by media peers last week after noting Pennsylvania Democratic Senate candidate John Fetterman had problems communicating with her, and media insiders and experts expressed private disgust at the backlash and warned of a possible chilling effect against other reporters.

From Fetterman’s wife calling for a network apology and “consequences” for Burns, to her own NBC colleagues publicly questioning her observations, to a flood of liberal journalist anger and sympathetic reports on behalf of Fetterman after her interview, Burns endured a swarm of criticism for a simple observation. As part of an industry that showed high sensitivity to attacks by figures like former President Trump and rallied around journalists he vilified, some insiders who spoke to Fox News Digital noted the comparative lack of public support for Burns.

One MSNBC insider praised her work, telling Fox News Digital that some within NBC had been “pathetic” with their criticisms of Burns and had clearly shown their bias toward Fetterman, who is running in a crucial Senate race against Republican Dr. Mehmet Oz.

Over at Legal Insurrection this was the headline:

“An NBC reporter is enduring a liberal media onslaught over her interview of Pennsylvania Democratic Senate hopeful John Fetterman and her remark that he had difficulty understanding their conversation off-camera.”

In other words? And considering the open left-wing bias of the mainstream media?

Instead of investigating and doing its due diligence on what was really going on with the stricken candidate and reporting it to Pennsylvania voters and the rest of the nation, the media reflex was to run cover for Fetterman. And when Fetterman finally agreed to that solitary debate with Oz, the intake of breath by debate-watchers in and out of the media was real. Sheer shock at hand. And for one reason and one reason only.

In not digging into Fetterman’s condition, and attacking NBC’s Dasha Burns for simply and objectively reporting what she observed, the media was signaling it was there not to cover Fetterman but to protect him – to cover for him.

Which is to say, yet another self-inflicted blow to liberal media has been had.