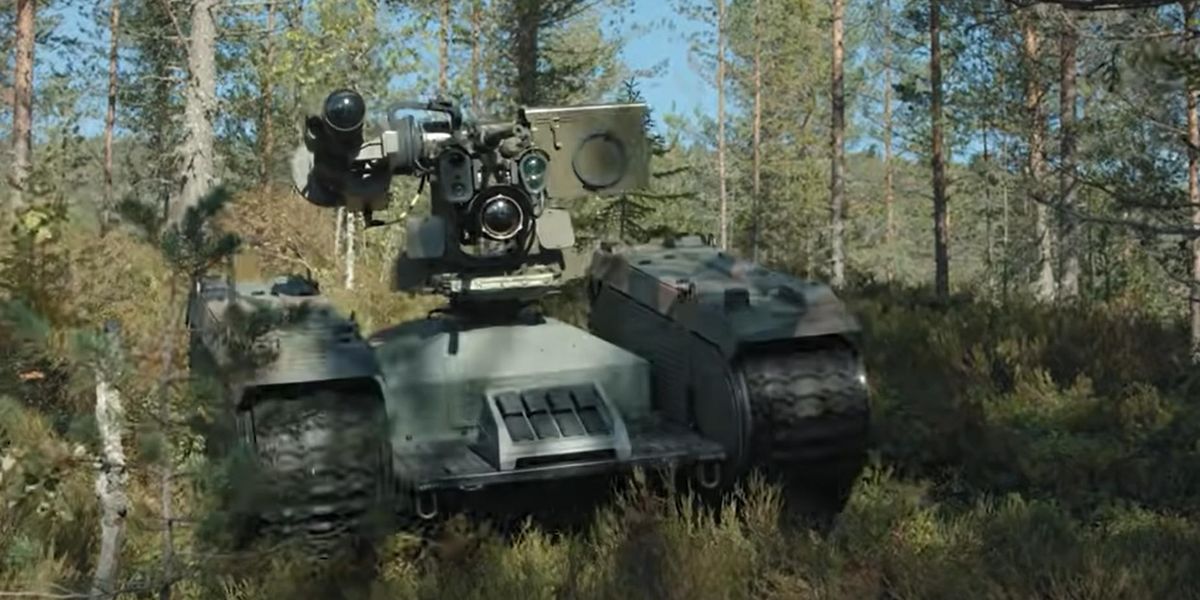 While UGVs are presently an unreliable supplement to flesh-and-blood ground forces, their development and growing capabilities may signal their future adoption as soulless substitutes.

A new breed of dog

A social media account affiliated with Chinese defense contractor Kestrel released a video earlier this month of an unmanned aerial vehicle dropping off a robotic four-legged dog equipped with what WarZone reported was possibly a Chinese QBB-97 light machine gun, capable of firing 650 rounds per minute.

A translation of the post in which the video first appeared on the Chinese micro-blog site Weibo said, “War dogs descending from the sky … Red Wing forward heavy-duty drones deliver combat robot dogs, which can be directly inserted … behind the enemy to launch a surprise attack.”

The post also suggested that the UGV could “be placed on the rooftops and work with troops on the ground to ambush enemies inside buildings.”

A longer version of the demonstration shows the Chinese UGV climbing stairs and performing simulated ground operations with human companions.

u201cChinau2019s Kestrel Defense demonstrates a robo-dog that carries a loitering munitions launcher. Welcome to your next war tech… https://t.co/4FNUBqy2F2u201d

Armored UGVs are not unprecedented, but have historically been grossly ineffective.

Russia, for instance, deployed its semi-autonomous Uran-9 tanks in Syria in 2016, which proved to be more trouble than they were worth. The technology is, however, improving.

Lt. Col. Sjoerd Mevissen explained that the four Tracked Hybrid Modular Infantry Systems tanks that were deployed with the Netherlands’ 13th Light Brigade to Lithuania last month “have been handed over for experimental use in an operational unit in a military-relevant environment.”

“These are not simply tests on a training ground,” said Mevissen. “We are under the direct eyes and ears of the Russians, and as such in a semi-operational environment.

The THeMIS tank’s various capabilities are showcased in this video:


THeMIS UGV with the PROTECTOR RWS

General Dynamics announced on Oct. 4 that it would be unveiling the AbramsX, a modified version of the Abrams battle tank. Although it will not be a fully unmanned vehicle, General Dynamics indicated that it will have a “reduced crew size and AI-enabled lethality, survivability, mobility, manned/unmanned teaming … and autonomous capabilities.”

Killer drones have long been a feature of modern combat. Unmanned aerial vehicles have been on the scene since the 1990s. The Guardian reported that one of their first impactful deployments was in the 1999 Kosovo war, when they were used to identify hidden Serbian positions.

Slate reported that in January 2001, the U.S. armed a Predator drone for the first time, equipping it with a laser-seeker and a Hellfire air-to-ground missile. Several months later, after the Sept. 11 terror attacks, the U.S. recorded its first drone kill when, on Nov. 14, 2001, a Predator-launched Hellfire missile obliterated al Qaeda’s Mohammed Atef and six of his terrorist allies.

Drones have been shown to be capable of hitting hard and airborne targets as well.

The first UAV air-to-air kill was recorded in 2017, when a U.S. MQ-9 Reaper drone shot down another with an infrared guided air-to-air missile, but by then drones were already ubiquitous.

This year, hundreds of lightweight U.S. Switchblades have been deployed in Ukraine, where they have been used to strike small targets.


This is the Power of the Switchblade Drone That Is So Scary!

Janes indicated that by 2030, over 80,000 surveillance drones and nearly 2,000 attack drones will have been purchased. A 2019 estimate indicated that the biggest purchaser of combat drones over the next decade would be the United States, with over 1,000 prospective purchases. China was a distant second, looking to acquire only 68 drones.

With tensions rising between the U.S. and both China and Russia, as well as smaller international conflicts, those estimates may prove conservative.