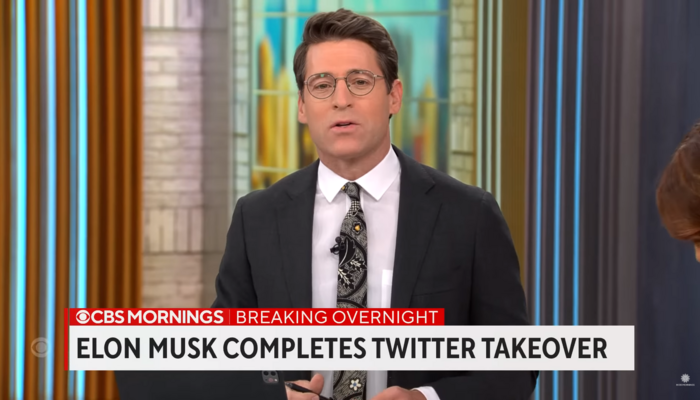 CBS is already warning of threats to “our democracy” after the world’s richest man and self-dubbed “Chief Twit” Elon Musk completed his takeover of censorship-obsessed Twitter. Musk finalized his lengthy acquisition of Twitter yesterday, tweeting triumphantly: “[T]he bird is freed.” Just hours later, the anti-American liberal press flocked to attack Musk’s deal because it could have “big implications for our democracy” and worsen “misinformation” on the Oct. 28 edition of CBS Mornings. Chief among CBS’s worries: A return of former President Donald Trump to the platform.

“I don’t know if it will be immediate, but it’s pretty clear President Donald Trump will probably be invited back on the platform,” CNET editor Ian Sherr said.

CBS, of course, framed the news of the Musk deal around “hate speech,” not free speech, right from the get-go. “How will Musk balance out freedom of speech while at the same time discouraging and reining in misinformation?” CBS correspondent Jonathan Vigliotti asked. “The stakes are incredibly high for millions of Americans.”

Musk has spoken multiple times on the proper “balance” between free speech and “misinformation.” In April, the billionaire said that he thinks “it’s very important for there to be an inclusive arena for free speech.” He repeated the societal significance of Twitter in an Oct. 27 letter to Twitter advertisers:

“The reason I acquired Twitter is because it is important to the future of civilization to have a common digital town square, where a wide range of beliefs can be debated in a healthy manner, without resorting to violence.”

Musk also slammed the “traditional media” for having “fueled and catered” to “polarized extremes” on the internet in his pitch to advertisers.

But instead of interviewing Musk or explaining his detailed vision for the social media giant, CBS chose to repeat the same old, tired propaganda lines about “Russian” interference in the 2016 presidential election:

“I want you to keep in mind U.S. Prosecutors determined in 2016 that a Russian agency used Twitter and other social media sites in an attempt to sway the election,” Vigliotti reported. “Even Twitter’s founder said misinformation about false election claims led to the attack on the Capitol last year.”

This isn’t the first time that CBS Mornings attacked Musk on the air. CBS correspondent Vladimir Duthiers claimed that “a lot of people think Elon Musk is sort of like a Bond villain now” amid speculation that Musk was planning a hostile takeover of the social media giant.

Conservatives are under attack. Contact Twitter at 415-222-9670 and demand that Big Tech be held to account to mirror the First Amendment. If you have been censored, contact us at the Media Research Center contact form, and help us hold Big Tech accountable.