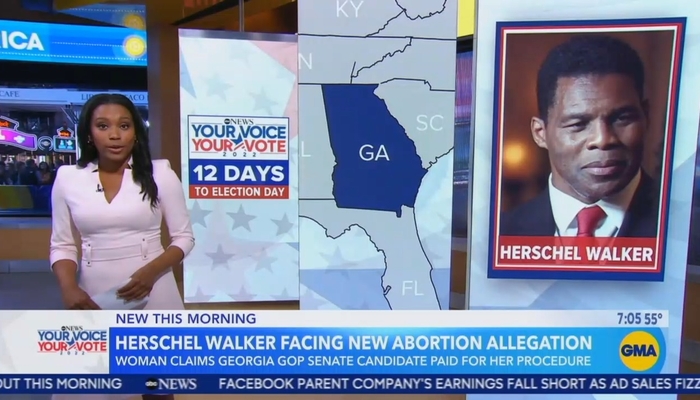 ABC, CBS, and NBC also found time to again prop up the mentally and physically impaired John Fetterman (D) in his bid to take Pennsylvania’s open Senate seat, suggesting he was surging with momentum because of (and not in spite of) his debate performance Tuesday.

Congressional correspondent Rachel Scott was on the case, touting the obvious fact that “I can tell you this is hardly what Herschel Walker wants to be talking about so close to Election Day” in “a dead heat” with Warnock.

“His campaign rocked by controversy yet again. This time from a second woman. She says, even though Walker claims to oppose abortion, that he paid for her to have one,” Scott added.

Despite the lack of solid evidence tying Walker to the act, Scott ran with hit because “[t]he woman is remaining anonymous because she says she fears retaliation” and she’s being represented by Allred. Further, the pair “released a voicemail, photo receipt, and card saying its evidence of her relationship with Walker, but did not provide evidence of the abortion itself.”

CBS Mornings led with these claims via co-host and Democratic donor Gayle King about these new claims hitting Walker “in the midst of a very tight race that could help determine control of the Senate.”

Congressional correspondent Nikole Killion hyped: “Herschel Walker is doubling down on this new claim, saying it’s not true. But the accuser insists that this is not politically motivated and says she has proof.”

Citing Walker’s denials, Killion went onto treat the accuser’s claims as fact even though Allred “did not present receipts from the clinic” and instead “other evidence of the relationship.”

To her credit, Killion conceded that out “[o]n the campaign trail, many of Walker’s supporters seemed unfazed”.

NBC’s Today also led with this Walker tale. Co-host Hoda Kotb hyped in a tease: “New accusations. Another woman comes forward claiming Herschel Walker urged her to have an abortion.”

Chief Washington correspondent Hallie Jackson touted “the focus” as being on “Georgia, where there is a new abortion allegation in one of the country’s most closely watched match-ups.”

“[T]here’s now another twist. Republican Herschel Walker, who has campaigned on an anti-abortion platform, denying a new allegation from a second woman who says Walker pressured her to have an abortion in the early ’90s,” said Jackson.

Jackson followed suit from those on the other networks by insisting “NBC News has not verified her allegations and the woman did not provide evidence Walker was involved in her abortion,” but if you spend more than a few seconds on something, isn’t that a suggestion you’re viewing it as fact?

As for Fetterman, ABC was the only network to suggest there was trouble. Stephanopoulos shared that “Fetterman admitted that the debate was not easy” and “Democrats increasingly worried about the race.”

Scott followed suit, saying that “his campaign tried to lower expectations before the debate” and things remain “very close”.

CBS Mornings had an extended, one-minute brief on Fetterman. Co-host Tony Dokoupil said Fetterman “respond[ed] to concerns from some about his debate performance on Tuesday night” even though he saw “a lot of support” and has “raised $2 million in the aftermath of that debate.”

NBC’s Jackson touted Fetterman’s campaign event, his fundraising haul, and proclaimed that his opponent and Republican candidate Dr. Mehmet Oz was “on defense against a new Democratic ad” about abortion (click “expand”):

JACKSON: And in another closely watched race in Pennsylvania, a tossup with polls ranking Democratic Lieutenant Governor John Fetterman and Republican candidate Dr. Mehmet Oz within the margin of error.

FETTERMAN: Doing that debate wasn’t exactly easy. [SCREEN WIPE] I knew it wasn’t going to be easy after, you know, having a stroke, after five months.

JACKSON: Fetterman, appearing at a campaign rally in Pittsburgh, after raising $2 million, his team says, in the hours after his one and only debate against Republican Mehmet Oz. Fetterman facing questions about his, at times, halting debate performance with lingering auditory processing issues after a stroke five months ago. Oz, also on the campaign, hammering the issue of crime and on defense against a new Democratic ad highlighting his debate comments on abortion.

DEMOCRATIC AD NARRATOR: This is who Dr. Oz wants in charge of women’s health care decisions.

Thursday’s midterms coverage trying to drag fellow liberals over the finish line was made possible thanks to advertisers such as AARP (on ABC), Febreze (on CBS), and Tide (on NBC). Follow the links to see their contact information at the MRC’s Conservatives Fight Back page.