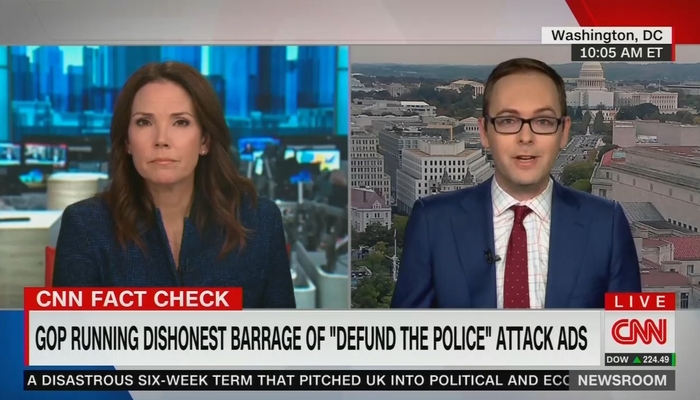 In recent weeks, CNN’s “fact checker” Daniel Dale has been showing up on air to trash Republicans for making things up. On Monday, it was Republicans using “defund the police” ads against Democrats.

On October 15 and on October 11, Dale was typically fact-checking Donald Trump.

On September 24, it was Republicans claiming there was an “open border” under Biden.

On September 16, Dale was again critiquing Republicans — on claims Democrats favored defunding the police. (Do you hear an echo?)

On August 27, Dale singled out Herschel Walker for claiming Sen. Raphael Warnock didn’t have a dog.

This is about which claims make it on air — and not about whether the Republican claims are actually false. New CNN boss Chris Licht met with congressional Republicans insisting he wanted to rebuild trust. But Licht’s employees are sticking to their usual Democrat-defending formula. Check out the last Daniel Dale dig:

In California, Republican House candidate Kevin Kiley attacked his Democrat opponent Kermit Jones in an ad: “And if Pelosi has her way, Jones will join her to defund the police and raise the gas tax even higher. Kermit Jones, he’s not with us. He’s with Pelosi.”

DALE: This is a double dose of nonsense. It is pure fiction conjured from thin air. Not only does this candidate, Jones of California, himself oppose defunding the police, but we know that Speaker Pelosi has repeatedly dismissed that concept. She’s done that in public and in interviews. Listen to two of her comments one from this year and one from back in 2020.

REP. NANCY PELOSI (D-CA): That is not the position of the Democratic party. Community safety to protect and defend in every way is our oath of office. Funding a police is a local matter, as you know. From the standpoint of our legislation, we’re not going to that place. What we’re doing is talking about how we change policies to make our policing more just.

DALE: And it is not just words under Pelosi’s speakership, Democrats have passed laws to provide additional funding to police, not to defund. So, again, this ad is just completely made-up.

HILL: Completely made-up but it gets a lot of attention, right?

Here’s 7 minutes of them saying, DEFUND THE POLICE! pic.twitter.com/Y7lwPAnEiw

Dale also flagged “Moms for Safe Streets” for claiming Rep. Abigail Spanberger (D-Va.) joined “AOC’s effort to defund the police.” Dale rightly noted that Spanberger yelled at party leaders after the last election, saying she barely won because of the “defund the police” advocacy. The networks didn’t cover that when it happened. The group noted Spanberger voted for the “George Floyd Justice in Policing Act,” which sought to end qualified immunity for police officers — meaning they could be personally sued. Pelosi argued this was needed to stop the “epidemic of police brutality” — which doesn’t sound pro-police.