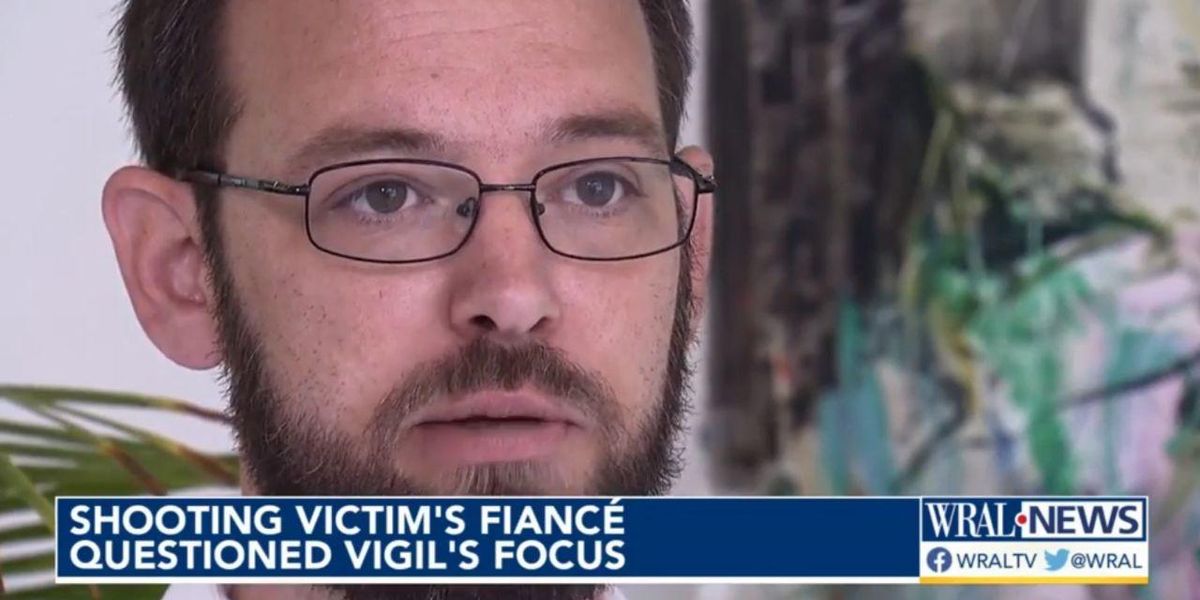 The fiancé of a woman killed during a shooting in Raleigh, North Carolina, said he felt the city-sponsored vigil held over the weekend was too politically charged. He accused local officials of exploiting the grieving loved ones attending the event in a political stunt to push for restrictive gun laws, reported WRAL.

On Sunday, the city hosted an event to honor the memories of those lost in a recent shooting that killed five people and injured two. State leaders, local leaders, and community members attended the vigil sponsored by the city, the NAACP, and Moms Demand Action, an advocacy group fighting for stricter gun laws.

Rob Steele attended and spoke at the event to honor the memory of his fiancée, Mary Marshall, who was killed in the attack on October 13. The two were set to get married this upcoming Saturday.

“I am not naïve,” Steele said. “I knew there would be some political conversation, but the event was supposed to be about the victims, about healing.”

“It wasn’t supposed to be majority gun control and gun violence,” he continued.

Steele stated that he wanted the event to be about honoring the memory of Marshall and the four other victims: Officer Gabriel Torres, James Thompson, Nicole Connors, and Susan Karnatz.

Before agreeing to speak at the memorial, Steele said he asked Mayor Mary-Ann Baldwin, who is currently running for reelection, if the event would turn into political theater.

“I asked the mayor, point-blank, ‘Is this a political stunt because you are up for reelection?'” Steele said. “She said, ‘Absolutely not.'”

“Either the mayor did not know what the people she partnered with were planning or she misled me,” Steele said. “If she knew she lied to me, if she didn’t know, then why?”

Steele called Baldwin’s speech “good” and “appropriate for the event.” However, he stated that the other speakers talked at length about gun control.

Governor Roy Cooper said during his speech that the grieving loved ones and community members should be “shocked into action.” He said, “We need wisdom to find solutions.”

Steele also expressed disappointment over the speech given by Gerald Givens, the president of the Raleigh-Apex NAACP. He stated that he was so upset by Givens’ comments that he left the memorial early.

“You can join the Raleigh-Apex NAACP,” Givens said on Sunday. “If just 100 of you join our branch today, we will become the largest in the state.”

Steele stated, “I got sick to my stomach. I felt like I had been used.”

Steele noted that he would not advocate for, and Marshall would not have advocated for, stricter gun laws.

Mayor Baldwin released a statement in response to Steele.

“Raleigh Healing had one purpose — to bring our community together to honor the victims, support their families and begin the healing process,” Baldwin said. “I am sorry that Rob feels the event was political.”

“It is important for communities to be able to grieve together and the perspectives of the friends and families of those lost should be heard and respected,” Winstead wrote. “The governor addressed Sunday’s vigil to share his prayers for the victims and their families and his commitment to mental health support and preventing the continued scourge of gun violence.”

The president of the Raleigh chapter of the NAACP released a statement clarifying what the event meant to him.

“We hoped to use the vigil to talk about the healing process,” Givens stated. “While there may have been many conversations about how to prevent gun violence, our hope was to reflect on and seek out how we as a community can begin the process of finding ways to heal together.”

MSNBC’s Reid: ‘Champion Vote Suppressor’ Kemp No Different Than Trump
Tucker SLAMS NBC Covering for Biden’s Decision to Leave Marine Behind
The Fringe With Megan Fox, Episode 110: Shocking New Details of Government Incompetence in Ohio Rape Case
Joe Biden as He Honors U2 at White House Reception: “150 Albums Sold! Among the Most Ever!” (VIDEO)
If You Really Wanted to Destroy US, You’d Do These 10 Things