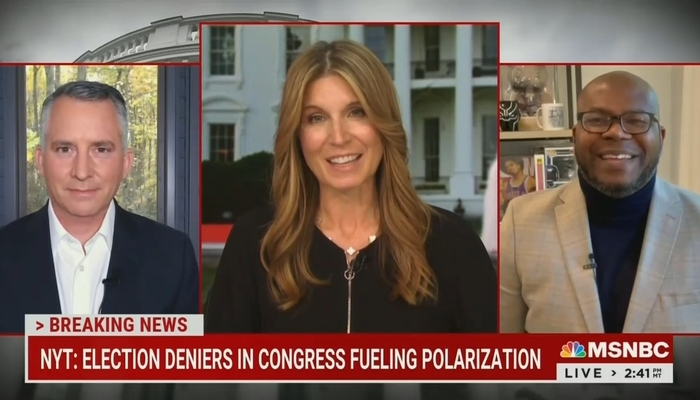 MSNBC has evoked fascism, or used the term “fascist,” 1,614 times this year alone as critics believe the network is “attempting to divide” with polarizing rhetoric.

Since the start of 2022 through Oct. 23, the word “fascism” was uttered 627 times on MSNBC and “fascist” was mentioned a staggering 987 times, according to a search of transcripts using Grabien Media. The total includes reruns.

MSNBC’s obsession is strong enough that the totals jump off the page compared to CNN, which has used “fascist” or “fascism” 491 times over the same period.

….Fox News has said “fascist” or “fascism” 1,113 times on air, but an overwhelming majority of the mentions are during discussions about the left using the rhetoric.

Just minutes before Wulfsohn’s article was posted on Monday, MSNBC host Nicolle Wallace professed to be gobsmacked at the New York Times report about all the “devil words” that Republicans use. ‘You don’t need a degree in political science to understand just how unprecedented and toxic this moment in American politics really is. You can feel it.”

“When it comes to terms that are considered polarizing, terms like ‘fascism’ and ‘Nazi’ are considered to be polarizing terms, but unfortunately those are the correct ways to describe what is happening with Republicans.” pic.twitter.com/UsI737RTkf

I scoffed in real time on Monday just seeing the graphic on screen that MSNBC (and the New York Times) were hyping that “election deniers” are “fueling polarization.” The term “election denier” is polarizing. MSNBC is polarizing on a minute-by-minute basis. Wulfsohn found that naturally, the hype is hotter as the voting is under way: MSNBC’s use of the term has picked up as the midterms approach, and “fascist” or “fascism” was said on-air 369 times in September and 229 times through the first three weeks of October.

“It’s terrifying how many Americans will choose literal fascism, female serfdom, climate collapse and the reversal of everything from Social Security & Medicare to student loan relief bc they think giving Republicans the power to investigate Hunter Biden will bring down gas prices,” she tweeted.

MSNBC political analyst Anand Giridharadas recently declared he saw the 2022 election as between “pro-democracy” and pro-fascism. He claimed on the network, “it’s not about party ID at this point… It is a dead heat between democracy and fascism.”

If only MSNBC could restrain themselves to just using the term to describe actual neo-Nazis instead of conservative Republicans, they might look more like a “news” channel.