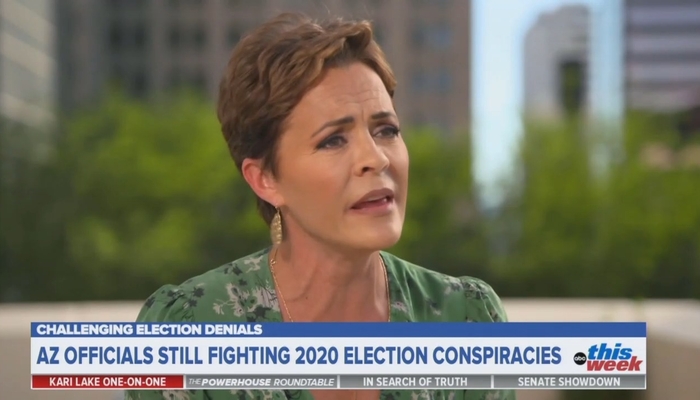 The ABC and NBC Sunday shows expressed disgust at Republican “election denier” Kari Lake running for governor of Arizona. When ABC’s Jon Karl pressed her on being Trump’s running mate in 2024, she responded by saying “the media’s trying to scare the public” that I’m going to leave” office and adding “I’m the fake news’s worst nightmare.”

On This Week, Jon Karl’s pushy questioning of Kari Lake for three and a half minutes (not including all his evidence she was WRONG and dangerous) was badly matched by a tentative 27-second clip with debate-skipping Katie Hobbs, her Democrat opponent. That was immediately followed by Donna Brazile insisting Hobbs had terrific solutions to all of the current problems.

On NBC’s Meet the Press, Chuck Todd accused Gov. Glenn Youngkin (R-Va.) of betraying America. Todd said to Rep. Liz Cheney “A lot of Republicans…that I would describe as empathetic to what you’ve been doing, have suddenly found themselves deciding, ‘hey, party over country.’” If Lake was presented as the Nightmare Republican, Liz Cheney is seen as the Dream Republican — because Dream Republicans persistently attack other Republicans.

When the networks pick up their weapons and attack conservative Republicans, it looks like a windfall of free advertising for their Democrat opponents. Hobbs can count on the national media to confront Lake and allow her to skip debates without much media pushback.

Enjoy the podcast below or wherever you enjoy podcasts.

New York seeks ‘somewhat bloodthirsty’ rat czar – with salary up to £138k
Returning to Pre-Trump ‘Dead Consensus’ GOP Would Be Big Mistake
Man behind the Korean wave talks about the future of K-pop and what aspiring artistes can do
The Fringe With Megan Fox, Episode 110: Shocking New Details of Government Incompetence in Ohio Rape Case
Tom Hanks is selling coffee for a good cause