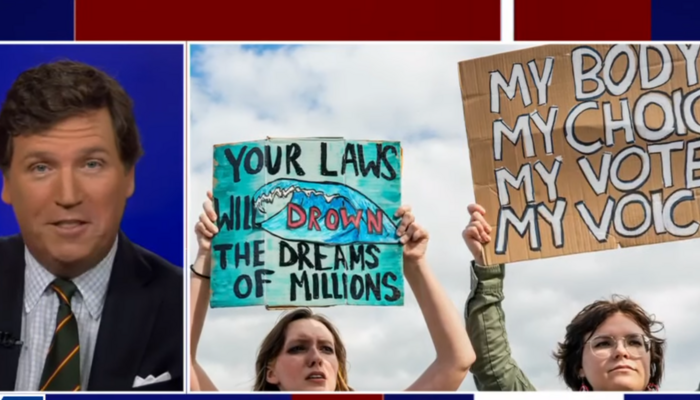 On Monday night, Tucker Carlson said that the left’s abortion agenda is a Jewish blood libel to kill Christian babies and use their blood for rituals. Just kidding. But he did back up the QAnon claim that Democrats are an elite cabal of Satanists and pedophiles who drink the blood of children.

Kidding again. Here is what Carlson actually said: “Abortion politics is a total fixation of Democratic donors. It’s the main thing they care about. Why is that, by the way? It’s a religion. It’s a child sacrifice cult.”

Carlson was not being literal. He was questioning why the left is so passionate about abortion to the point where it is all-encompassing and seems religious and cultlike.

But Jezebel writer Susan Rinkunas was so sure about the meaning of what Carlson said that the tagline of her piece reads, “Is the Fox News host invoking QAnon or antisemitic blood libel conspiracy theories? You decide!”

Rinkunas claimed Tucker was implying an antisemitic blood libel because, well, “Republicans toying with antisemitism love to point out that one of Democrats’ top donors, billionaire George Soros, is Jewish.” They do?. A stretch, to say the least.

She even called Carlson’s statement dangerous and “especially frightening” because he has such a large viewership.

But what’s the answer to Carlson’s question? With all the other immense issues facing voters, why is it that the left only seems to care about abortion? It is a worthwhile question. Maybe the average leftist has merely been brainwashed by propaganda, but why do leftist donors put so much money into it?

The answer can be sinister without being antisemitic or QAnon.

Musk Suggests He’ll Make Internal Discussions on Twitter’s Hunter Biden Scandal Censorship Public
Fairfax County Schools To Use ‘Assigned Females/Males’ in Sex Ed
Delta is making it harder to get into its airport lounges after they were flooded by travelers
Video: Coast Guard rescue of cruise passenger who fell overboard for up to 15 hours hailed as a ‘Thanksgiving miracle’
‘I am thankful for the freedom of self’: Women express gratitude for their abortions in piece posted on Thanksgiving