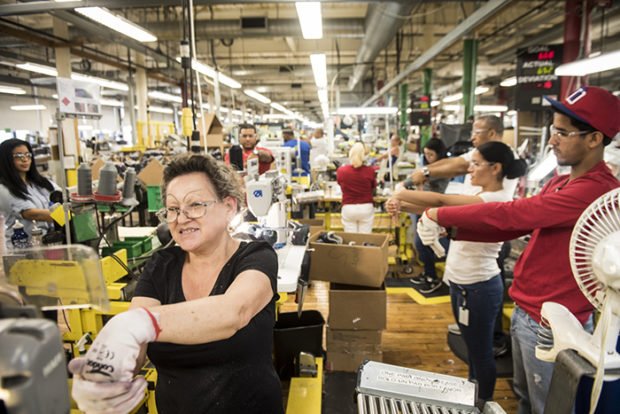 U.S. manufacturing showed signs of a downturn as the fourth quarter began, with an early estimate of S&P Global’s Manufacturing Purchasing Managers Index (PMI) for October dipping to its lowest level since early 2020.

New orders for manufactured goods fell marginally in October, as new exports fell at the fastest rate since May 2020, pushing the “Flash” US PMI results to 49.9, its lowest level in 28 months, according to financial analytics firm S&P Global Monday. The “Flash” PMI, which is a preliminary result based on data available from Oct. 6 through Oct. 21, also saw business optimism plummet in October to its lowest level in more than two years, as companies began working through their backlogs, indicating that demand was declining.

“While output in manufacturing remains more resilient for now, October saw a steep drop in demand for goods, meaning current output is only being maintained by firms eating into backlogs of previously placed orders,” said Chief Business Economist Chris Williamson at S&P Global Market Intelligence. “Clearly this is unsustainable absent of a revival in demand, and it’s no surprise to see firms cutting back sharply on their input buying to prepare for lower output in coming months.”

As the manufacturing sector saw a downturn, prices grew at their slowest rate in nearly two years, S&P Global reported. A greater portion of economists have begun to predict a recession will begin in 2023, although the idea has received some pushback from large firms like Goldman Sachs, MarketWatch reported Monday.

“The surveys therefore present a picture of the economy at increased risk of contracting in the fourth quarter at the same time that inflationary pressures remain stubbornly high,” said Williamson. “However, there are clearly signs that weakening demand is helping to moderate the overall rate of inflation, which should continue to fall in the coming months, especially if interest rates continue to rise.”

Twitter Axing of COVID Misinformation Policy: A Victory for Free Speech, Not Misinformation
Jeffrey Epstein’s estate agrees to pay $105m to US Virgin Islands
Returning to Pre-Trump ‘Dead Consensus’ GOP Would Be Big Mistake
Jean-Pierre calls ‘Twitter files’ revelations about censorship of Hunter Biden laptop story a ‘distraction that is full of old news’
Mystal: SCOTUS Religious Liberty Case Will Bring US Back to Jim Crow