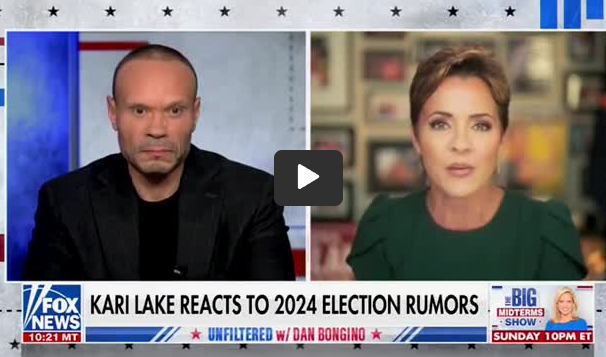 Republican gubernatorial candidate Kari Lake of Arizona claimed liberals fear her because she “can’t be bought, bribed or coerced” during a Saturday night Fox News appearance.

“I never wanted to get into politics. I left my career and walked away from my paycheck because I was disgusted with where journalism was going, the propaganda. The people of Arizona recruited me, they asked me to run. I’m a citizen politician,” Lake told host Dan Bongino. “I’m not in this because I want to climb the rungs of the political ladder into a different position.”

Lake has received criticism for her politics; CNN contributor Dean Obeidallah labeled Lake a “threat to democracy” in a Wednesday column, while the New Republic claimed her campaign was a sign of “democracy’s lack of defense against destroying itself.”

“I’m in this because I want to save Arizona. I covered the problems we’ve been facing in Arizona for 27 years and watched as politicians said one thing and did the other. I’m going to do what I say I’m going to do,” Lake said.

“I can’t be bribed, bought or coerced. I think they are afraid of that. They don’t have control over me,” Lake said. They know I’m truly representing the people of this state.”