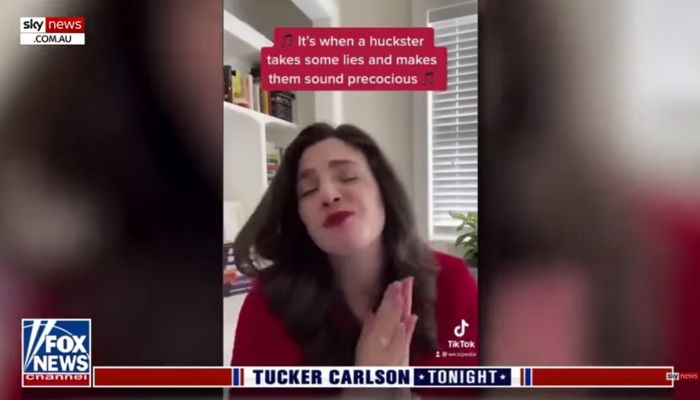 The New York Times front page on Friday sounded a familiar refrain on the perils of conservative “disinformation” in “Exploding Online, Disinformation Is Now a Fixture of U.S. Politics.”

But beyond the latest tiresome rehash that reporters Steven Lee Myers and Sheera Frenkel made of what former President Trump is now spouting on his social media platform, the piece also relied on the dubious expertise of Nina Jankowicz, President Biden’s embarrassing pick for the ominously titled “Disinformation Governance Board,” before it was mocked out of existence this summer.

On the morning of July 8, former President Donald J. Trump took to Truth Social, a social media platform he founded with people close to him, to claim that he had in fact won the 2020 presidential vote in Wisconsin, despite all evidence to the contrary.

Barely 8,000 people shared that missive on Truth Social, a far cry from the hundreds of thousands of responses his posts on Facebook and Twitter had regularly generated before those services suspended his megaphones after the deadly riot on Capitol Hill on Jan. 6, 2021.

And yet Mr. Trump’s baseless claim pulsed through the public consciousness anyway. It jumped from his app to other social media platforms — not to mention podcasts, talk radio or television.

The Times found this to be disturbing sign that “disinformation has metastasized since experts began raising alarms about the threat.”

Trump didn’t win Wisconsin. But couldn’t the Times have found a less ridiculous “expert” for its latest iteration of election paranoia than Nina Jankowicz?

“I think the problem is worse than it’s ever been, frankly,” said Nina Jankowicz, an expert on disinformation who briefly led an advisory board within the Department of Homeland Security dedicated to combating misinformation. The creation of the panel set off a furor, prompting her to resign and the group to be dismantled.

(“Expert on disinformation” Jankowicz spread “disinformation” herself on Hunter Biden’s laptop and “Russiagate,” and was responsible for this cringe-worthy Mary Poppins parody.)

Not long ago, the fight against disinformation focused on the major social media platforms, like Facebook and Twitter. When pressed, they often removed troubling content, including misinformation and intentional disinformation about the Covid-19 pandemic.

Today, however, there are dozens of new platforms, including some that pride themselves on not moderating — censoring, as they put it — untrue statements in the name of free speech.

There’s the rub: Who decides what’s “untrue,” especially when the “science” is constantly in flux on COVID-related issues like the virus’s origin, the efficacy of masks, and the effectiveness of vaccines to stop transmission?

Myers and Frenkel hated that word “censor,” putting it in scare quotes to suggest it’s not really happening to conservatives.

The Times pushed hard for censorship on behalf of “experts dedicated to countering disinformation,” virtually all liberal groups.

Still, the cottage industry of experts dedicated to countering disinformation — think tanks, universities and nongovernment organizations — say the industry is not doing enough….

The risible “disinformation expert” Jankowicz was given the final word.

“They should have brought us together,” Ms. Jankowicz said, referring to the pandemic and the riots. “I thought perhaps they could be kind of this convening power, but they were not.”