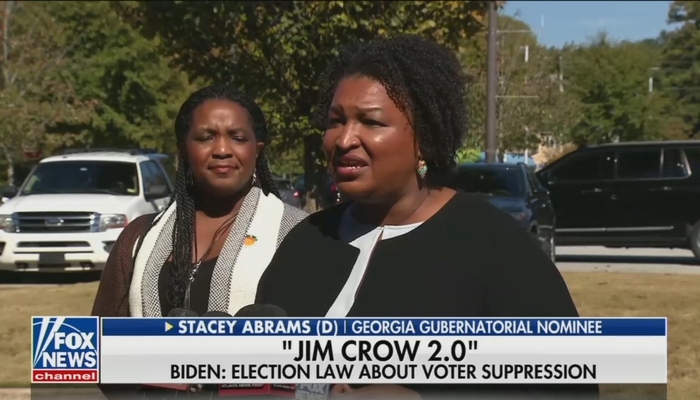 Way back there in the stone age of March 31, 2021, The New York Times headlined op-ed like this:

Georgia’s Voter Law Is Called ‘Jim Crow 2.0’ for a Reason

Republicans today know that blocking access to the ballot has always relied on legal maneuvering and political schemes. The Times column, by Jason Morgan Lewis, billed as “a historian who has written extensively about the civil rights movement, the South and politics” reflected the widespread certainty in the liberal media and elsewhere in the lefty world (like, say, with President Joe Biden!) that the election integrity measures passed by the Republicans in the Georgia legislature and signed into law by Republican Governor Brian Kemp were all about suppressing voter turnout. Cue the cry of “racism!”

The Times piece said this:

“What legislators in Georgia and across the country have reminded us is that backlash to expanded voting rights has often arrived by a method that our eras have in common: by laws, like Georgia’s Senate Bill 202, passed by elected politicians.

Opponents of the new Georgia law denounce the legislation as “Jim Crow 2.0” precisely because they recognize the continuities between past and present. The bill’s most ardent supporters, who lined up in front of a painting of a building on the site of an antebellum plantation to watch Gov. Brian Kemp sign it into law, seem less interested in distancing themselves from that past and more eager for Americans to forget it.”

Georgia has recently begun early voting under the new law- and here is the headline from Atlanta’s Fox 5 this week:

The Georgia Secretary of State’s chief operating officers says more than 125,000 voted on day one of early voting yesterday.

‘As of 4:15 we have seen over 100,000 Georgians cast their votes early. This blows away the previous midterm first day record of approximately 72,000 and we have lots of voting to go today,’ Gabe Sterling, the Secretary of State’s COO, said in a tweet.”

And The Times wasn’t the only lefty media outlet to have considerable egg on its face. Fox News headlined this reminder: CNN and MSNBC spent much of 2021 labeling Georgia’s Republican-passed Election Integrity Act as the next Jim Crow, but record-breaking turnout in the Peach State has essentially debunked the once-popular liberal narrative.

Democrats and their allies in the media repeatedly argued that the law was a racist effort to deny people the right to vote, especially minority Americans, and could push U.S. democracy off a cliff. But during the second day of early voting in Georgia this year, the state saw a 75.3% increase from the second day during the 2018 midterms and a 3.3% increase over the second day of early voting in the 2020 presidential election, according to the office of Georgia Secretary of State Brad Raffensperger.

The overwhelming turnout is a far cry from CNN and MSNBC talking points that suggested the new voting law was comparable to Jim Crow laws that enforced and legalized racial segregation in the south. Georgia Office of the Secretary of State chief operating officer Gabriel Sterling, who is also the interim deputy secretary of state, believes record turnout crushed the liberal narrative.

And not to be forgotten is that all these segregationist smears cost Georgia businesses, as noted by RNC Chairwoman Ronna McDaniel, some $100 million dollars in revenue. The New York Post noted:

The election law was also decried by major corporations, many of whom boycotted the state in response

Major League Baseball pulled its 2021 All-Star Game out of Atlanta in protest of the law, moving the game to Denver.

Hollywood star Will Smith announced that because of the law, his production company would no longer film the antebellum drama Emancipation in the state.

Coca-Cola, Delta Air Lines, Merck, UPS, JP Morgan Chase, Microsoft, and Facebook were among the myriad companies that expressed concerns over voter suppression in the wake of the law’s passage.

In short? All of this hysteria in -and out – of the media about “Jim Crow 2.0” swamping Georgia in a river of “voter suppression” was, to be polite, bunk. Hogwash.

Will The Times, CNN, MSNBC and any other media outlets who ran with the same story line apologize for running a major league falsehood? Will Major League Baseball apologize for acting on the same untruth? Will Will Smith? Will Coca-Cola, Delta Air Lines, Merck, UPS, JP Morgan Chase, Microsoft, and Facebook?

Don’t wait around for an apology from any of these.

This is a classic example of just how the media giants whip up a frenzy that turns out to be based on a flat-out untruth.

Kim Kardashian breaks her silence on Balenciaga controversy, says she’s ‘disgusted and outraged’
‘Extremely advanced’ bomber aircraft unveiled by US
How the Biden Justice Department Vindicated Trump
BREAKING: Court Throws Out Special Master For Trump’s Mar-a-Lago Documents Case
How electric air taxis could shake up the airline industry in the next decade